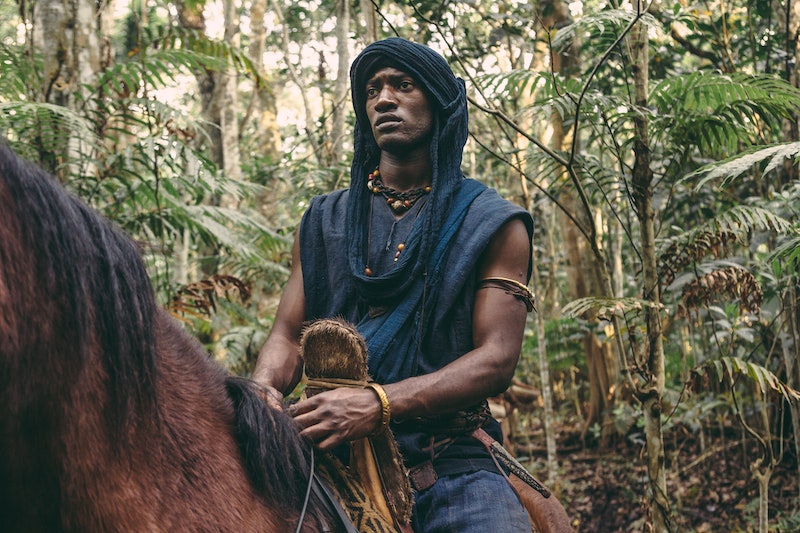 With so many dissatisfying remakes of films and series, it's understandable to question why Hollywood continues to create them. However, Roots is an exception to that. Not only do the people behind the remake feel that their version is more relevant than ever, but that differences between Roots and the original miniseries will make the updated version more accurate than it was when it first aired in 1977. Roots is based on the novel Roots: The Saga of an American Family by Alex Haley. While A+E Networks' version, which will air simultaneously on History, Lifetime, and A&E, will have some changes from the 40-year-old original, still expect to learn about the sprawling history of Kunta Kinte and his family when it premieres on Monday, May 30.

The 1977 miniseries Roots was a landmark piece of television that was watched by more than 50 percent of all American homes with TVs, according to Nielsen. To help put that number into perspective, Vulture compared how the most-watched show on cable in 2016, the AMC's The Walking Dead, was viewed by under 8 percent of homes. With great viewership when it first aired and its impactful legacy with colleges teaching Roots classes and high school students watching the series in school (like I did), a remake seems unnecessary. However, as The Hollywood Reporter wrote, the original series can be considered dated, with producer LeVar Burton (who starred as Kunta Kinte in the original) stating that producer Mark Wolper (whose father produced the original) told him that he tried to show the series to his own 16-year-old son and it did not resonate with him. And thus, a remake was born, complete with the modern touch that Questlove (serendipitously of the band The Roots) supervised the music.

But not only is the new Roots Burton-approved with a hopefully more timeless aesthetic that will be able to be watched and appreciated for generations to come, but the current social climate also had an influence on the creation of the 2016 Roots . As The New York Times wrote, "The hope is to recontextualize Roots for the Black Lives Matter era" and director Mario Van Peebles cited one moment in the series, where an escaping slave is shot in the back, as particularly relevant to the current large number of shootings of young black men.

When speaking about that scene to The Hollywood Reporter, Van Peebles said, "The way we shot the assassination and the way it reads is ultimately so unfortunately timeless. It's going to be hard to watch this for some people — especially me as a parent — and not think about where we are now."

Besides a modern audience being able to draw parallels between race relations today and the slavery that has so dramatically impacted history, there are more superficial updates that viewers will notice. For instance, Kunta Kinte will be portrayed by just one actor — Malachi Kirby — in the entirety of the series rather than it being split by age like Burton and John Amos did back in 1977. In an interview with W. Kamau Bell for Mother Jones, Burton spoke about how he encouraged the new Kunta Kinte, British actor Kirby, to create his own version of the iconic character. Bell noted that while Burton's Kunta was more childlike, Kirby's feels more like a man and that his "warrior spirit" is on display.

But the major difference between the two miniseries, besides the updated production, is the fact that more information has been discovered about the history behind Roots. Thanks to the success of the novel and the miniseries in the '70s, more people wanted to research Kunta Kinte's origins, Burton claimed in his interview with Bell. Burton cited that more has been learned about the Mandinka culture, of which Kunta was a part, like that they were horse warriors and Bell pointed out that the new series shows that the Kinte family was Muslim. Producer Wolper told The New York Times that while Kunta's home in the village of Juffure in the Gambia of Africa had been portrayed as remote in the original miniseries, history now points to Juffure being a busy commercial trade post. These newly discovered elements of Kunta's origins will be updated for the reimagined Roots.

Another element of history that wasn't incorporated in the first Roots that will be a part of the updated version is the Civil War battle of Fort Pillow, The New York Times reported. When the Union army surrendered, the Confederate army took white soldiers as prisoners, but either murdered the black soldiers or sent them into the slave trade. As Roots documents the horrors of slavery and the mistreatment of the black community for generations, this added scene will be another gut-wrenching moment of America's deplorable history.

Roots was an important moment in cultural history in 1977 when it premiered on TV and nearly four decades later, A+E Networks is hoping to repeat that. But more important is the history of slavery that Roots depicts and no update to a miniseries can change its resonance. To experience this impactful history in your living room, you can watch Roots when the four-part, eight-hour miniseries begins at 9 p.m. on Memorial Day with a new episode airing over each of the following three nights.

Click Here to Buy Roots: The Saga of an American Family