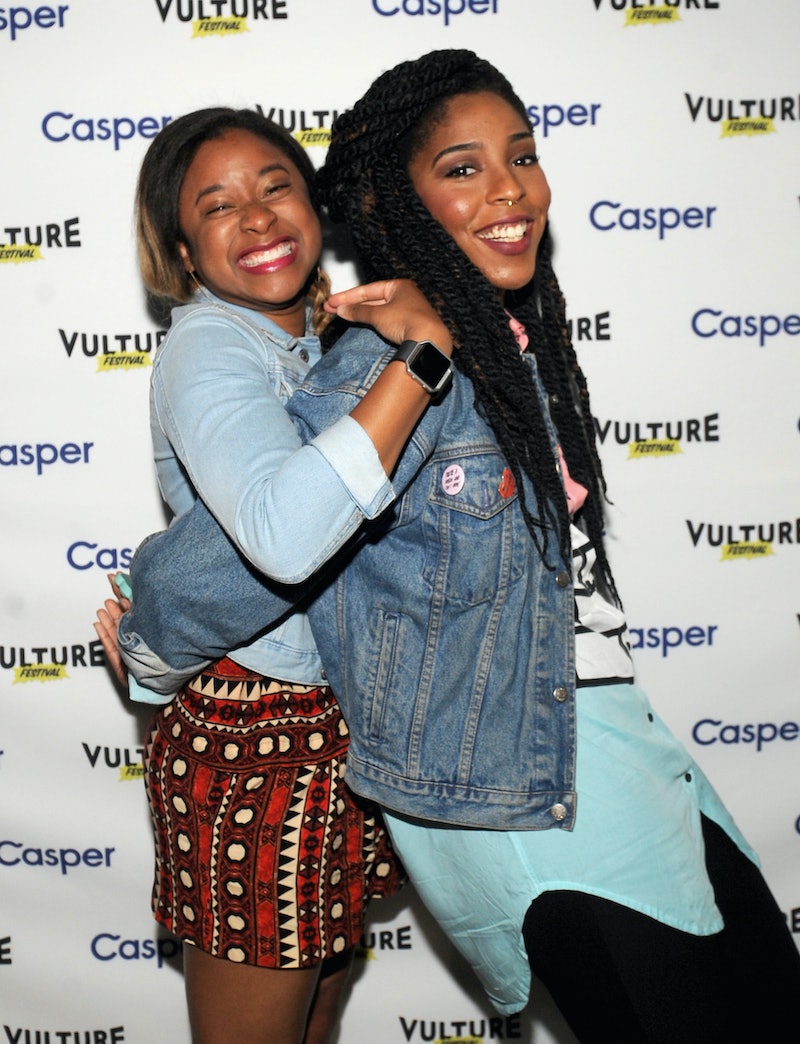 I used to be a podcast aficionado. I ate up the first season of Serial, and I have listened to every single episode of This American Life, Radiolab, and a lot of Planet Money. But, lately, I haven't been able to find something to commit to. That is, until Jessica Williams and Phoebe Robinson premiered their podcast 2 Dope Queens on April 5: Not only is it "laugh out loud like a fool in public" funny, but 2 Dope Queens is also seriously required listening.

It's the perfect and authentic combination of serious issues discussed by two amazing black women, alongside plenty of talk about butt stuff. It's like a Woke Millennial primer. Williams is seasoned at this from her time on The Daily Show, but she's even better at it with her best friend and co-host Robinson. Oh, and if you don't know Robinson, that's one more vital reason to listen to this podcast: Not only is she a hilarious comedian, but she's also a writer. Her first collection of essays, You Can't Touch My Hair, is set to be released soon by Penguin Random House. As Robinson herself says in one episode, she and Williams are black girl magic together.

One of my favorite moments from the podcast is from Episode 5, “Thank You, Harriet Tubman,” when Jessica and Phoebe have a great conversation about home organization and reparations:

Jessica: I found these ladies online, and then, get this! These two older white ladies came to my apartment, and they redid my whole apartment!

Jessica: This is what we did it for! Thank you, Rosa! thank you, Harriet! Thanks, Sojourner! She was like folding, and I was like, “I’m tired,” and she said, "Why don't you go sit down and order some food for yourself and I’ll just take care of this.” I was like damn, this is definitely my reparations, that was my mule.

Phoebe: F*ck the 40 acres, that’s too much work. Just get the mule.

If you aren’t familiar with the term “40 acres and a mule,” it was the first reparations initiative after slavery promised to black farmers for agrarian reform and agency through land ownership. However, the promise was not fulfilled, and the land was returned to the Confederates it belonged to. At a time when reparations are an urgent issue, discussed at length by the likes of author Ta-Nehisi Coates, it’s surprising and unique to hear it discussed casually by these two young, black women. The subtext of their commentary is that reparations are far off, but having, in some situations, power over “older white ladies” feels pretty damn good.

Another great moment is Phoebe experiencing racism at Michael's, the craft store, when she's just "trying to get some damn frames." You can hear the story at the beginning of their preview episode, "Who Dis?" Phoebe gets ignored for service at the frame counter and a white woman is helped first, and Phoebe talks about channeling her "customer service inner white lady." These, and other anecdotes, while hysterical when told by these two amazing ladies, call attention to the near-constant barrage of microaggressions that black women face every damn day.

Additionally, aside from the great hosts, tons of great comedians that vary from the regular white guy stand-ups are on the show as well. Some you may have heard of, and others you should be listening to — either way, the podcast is a great introduction to these talents. So far, 2 Dope Queens has featured, among others: Naomi Ekperigin, Aparna Nancharla, Nore Davis, and Williams' fellow Daily Show correspondent Roy Wood, Jr. Williams, Robinson, and all of the comedians they feature on the podcast talk about race, gender, sex, and other less serious topics — like Robinson's love of U2 (which Williams hilariously loves to mock her for).

Talking to Bitch Media about how she wanted the podcast to be received, Robinson said: "For the first seven days, we were number one on the iTunes podcast charts because I think that is ultimately how audiences saw 2DQ. The huge amount of diversity is just icing on the cake because what matters to Jess and I number one is that the show is top to bottom funny."

Another great bonus: the show is taped live at Union Hall in Brooklyn, and audience members are totally free to attend. If you're not lucky enough to attend, they at least want you to feel like you're there (something they do by engaging audience members that are present): "We really wanted to feel like the listener is in Union Hall with us, whether they are on the train to work or if they’re working out," Robinson told Vanity Fair in March.

Additionally, when asked by Vanity Fair in the same interview about the show — specifically, what their vision was for 2 Dope Queens was — Williams said:

We really try and make a concerted effort to make sure that people of color are represented and people from different orientations are represented on our show. I think you have to just try a little bit. I think there was some quote from Samantha Bee from her new show, where they were like, ‘How do you have a diverse writers’ room, Sam? How do you manage this?’ And she was like, ‘You just do the thing! Like, do it!’

And they are doing the thing. The conversational style is what makes the show stand out. Instead of scripted segments, as you are used to from Williams on The Daily Show, she and Phoebe just talk in a cathartic way. It's raw, beautiful, and most importantly, real. Subscribe on iTunes now.

More like this
It’s Official: 'The Bachelorette' Is No Longer A Fairy Tale
By Samantha Allen
What's New On Netflix: A Third '365 Days' Movie & Lili Reinhart’s New Film
By Arya Roshanian
What’s New On Netflix: 'Never Have I Ever' & 'Indian Matchmaking' Return
By Arya Roshanian
Everything To Know About The HBO Max & Discovery+ Streaming Service Merger
By Brad Witter
Get Even More From Bustle — Sign Up For The Newsletter