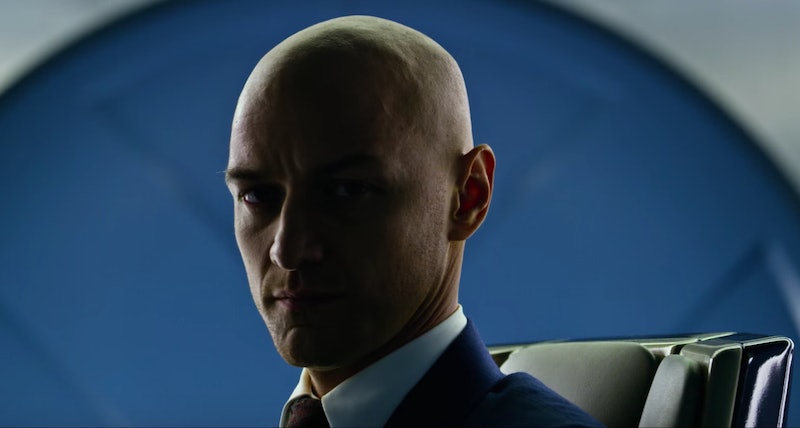 Ever since James McAvoy made his debut as Charles Xavier in X-Men: First Class , fans have been eagerly awaiting for the day when he would actually become Professor X. The famous X-Men leader previously portrayed by Patrick Stewart is traditional portrayed as a bald man in a wheelchair, but in X-Men: First Class, Charles was a young man with full use of his legs and an even fuller head of hair, and though Charles became paralyzed at the end of First Class, his hair remained. Even when McAvoy's Charles crossed paths with Stewart's in X-Men: Days of Future Past, the character's long hair survived the movie yet again. But Charles' highly anticipated makeover is coming, as in X-Men: Apocalypse, it's finally explained why Professor X is bald.

Spoilers ahead! Charles goes bald in X-Men: Apocalypse , or, rather, permanently loses his hair due to an evil mutant. When Apocalypse begins, however, Charles is actually pretty close to the Professor X we all know and love. His school for gifted youngsters is in full swing, and he has finally embraced both his powers and his paralysis (both of which he had resisted in Days of Future Past). But, alas, his hair is still in tact (and his wardrobe still consists of sharp blazers and comfy looking sweaters), for the majority of the new movie.

At the end of film, however, Charles has become Professor X, complete with a bald head and a brand new suit. So, what happens? Well, in the second act of the film, Apocalypse kidnaps Charles. Intrigued by his powers of telepathy and mind control — powers that Apocalypse somehow does not yet possess — Apocalypse decides he's going to transfer his consciousness and long list of powers into Charles' body. The body transfer process is how Apocalypse has stayed alive all these years, and how he has collected mutant powers. And, to facilitate the ritual, the mutant body Apocalypse is transferring with must have a shaved head, or, in the case of Charles, lose his hair.

The scientific reason for Charles' hair loss is never explained. It's likely it has something to do with Apocalypse's mutant powers that manifest themselves in his blue, armored appearance. You can't wear the helmet armor if you don't have a shaved head, I guess. And even though the X-Men arrive in time to save Charles from being absorbed by Apocalypse, they're too late to save his locks.

McAvoy did, in fact, shave his head for the part — no bald cap here — and he even video-chatted with Stewart as he did it, according to the behind-the-scenes featurette below. And, in true superhero fashion, McAvoy and X-Men filmmakers filmed the entire thing and put it online for all to see. "With every little piece that drops, my powers are increasing," McAvoy stated as he saved his own head. "It felt really right. It was probably the moment, even more than in Days of Future Past, where I felt like he was handing the baton over. He was like handing the clippers over," he added.