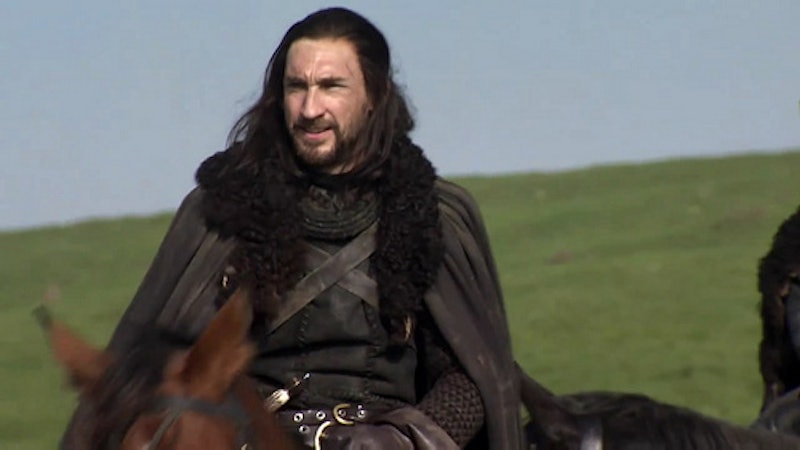 The Internet has been running wild with theories about the Stark uncle and Night's Watch Ranger Benjen Stark since his confusing and untimely disappearance in Season 1. Considering his body and death was never seen on screen, the idea is he could still totally be alive, even if he's an undead white walker (so only kinda alive). Based on a Reddit theory, now, some fans are surmising that Benjen Stark will return in Season 6 Episode 6, "Blood of My Blood." But, allow me to play devil's advocate here and suggest a different theory: Who could be in Episode 6 if not Benjen Stark?

Both the trailer for Season 6 the promo for Episode 6 are what have people thinking Benjen is back. In the episode promo, we see Bran and Meera stuck in a dark and snowy environment (duh) surrounded by white walkers but being rescued by a mysterious man. Then, in the trailer, we see the same sort of environment and a guy on horseback killing a walker with a flaming sword. First off, Wildlings don't have horses and White Walkers only have zombie horses, so it's definitely someone from South of the Wall. Second, our mystery man is clearly someone who is very experienced in killing off the undead. Meanwhile, the episode is titled "Blood Of My Blood" which could very well mean the person has a blood relation to Bran.

We have no definite answers on who this mysterious figure is, but the following are some theories.

Cold Hands is a character who hasn't shown up in the show just yet, but in the Song of Ice and Fire series, he's a White Walker dressed in old school Night's Watch garb who fights against the baddies and chills with Bran and Meera. Some people have theorized that Benjen is, in fact, Cold Hands, but George R. R. Martin debunked this theory with a big "No." So, we aren't sure who Cold Hands really is, but it doesn't matter because he could still come in and rescue our favorite little warg and his keeper, which would be nice.

Our favorite Baratheon bastard sailed North at the end of Season 3 so he wouldn't be burned alive by Melisandre, and that's all we know. What if he somehow managed to sail beyond the Wall and become a master White Walker-slayer? That would be pretty cool, because those abs are seriously missed.

We already know Jojen Reed didn't get his greenseer ability out of the blue (or green) — they came to him from his papa, Howland Reed. What if Howland saw that the blood of his blood was in danger (both this daughter and his best friend's son) and decided to roll up and try to save the day? Especially now that the Three Eyed Raven has been Obi Wan Kenobi'd to the Night King's Darth Vader (RIP), Bran needs a new sensei, and Jojen could be just the trick. It would also be good for fans of the R+L=J theory — because Howland was there and could potentially prove it right. (I'd like to thank Bran's time-traveling for hooking us up with that potential foreshadowing.)

No matter who our mystery man is, I'm very hopeful that he will save Meera and Bran from a White Walker fate. Those two have much more to accomplish before their Watch is ended. There seems to be a high probability many of the remaining Starks will be able to unite this Season, and that can only happen if Branny Boy doesn't die. Everyone, keep your fingers crossed and your minds open!