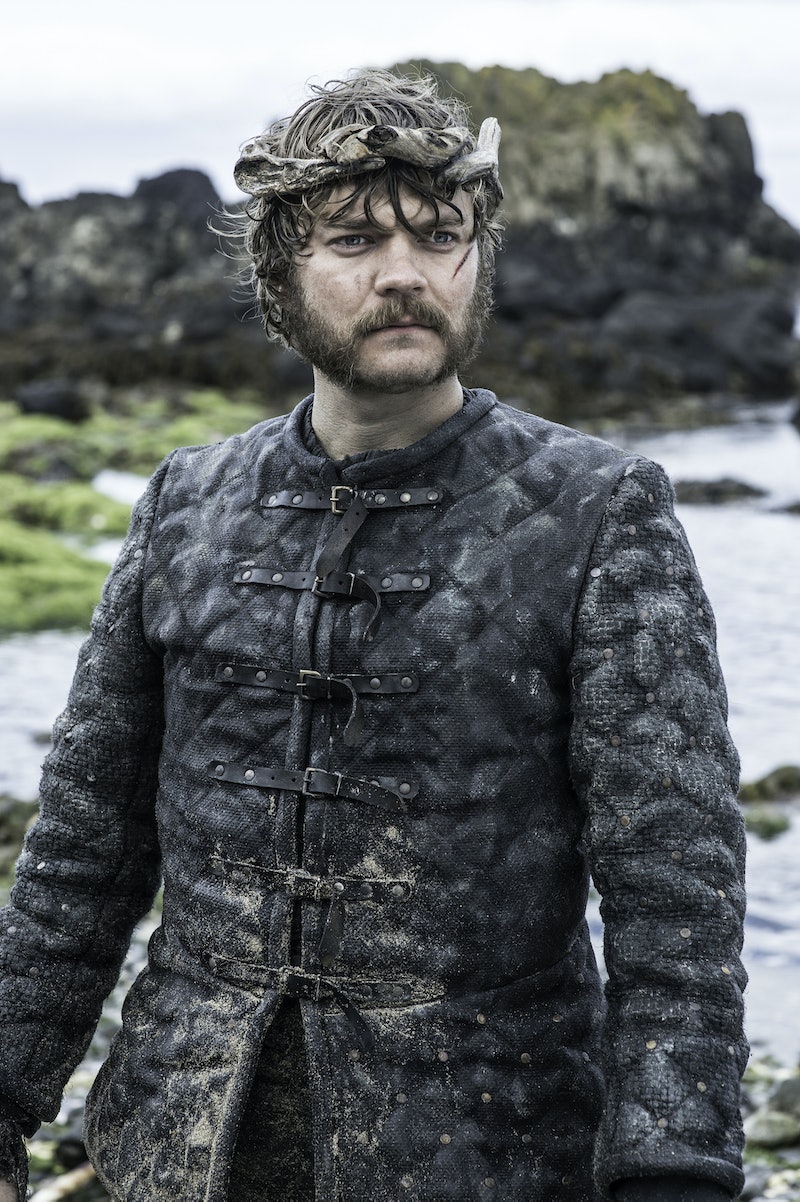 The War of Five Kings may be over, but monarchs are still popping up like weeds all over Westeros and Essos. First Daenerys killed the khals and declared herself queen of all the Dothraki; then Bran learned the origins of the icy Night King; and now Pyke has a new ruler wearing the Driftwood Crown. Despite Yara's eloquent speech — and Theon's impassioned endorsement — their AWOL uncle won the title of King of the Iron Islands. But who is Euron Greyjoy on Game Of Thrones , exactly?

Although A Feast For Crows, the fourth novel in George R.R. Martin's A Song Of Ice And Fire series, spends considerable time with the various members of the Greyjoy family and their kingsmoot, the show wisely glossed over this interminable subplot in one five-minute scene in last week's episode, "The Door." While book readers were likely thankful for this Sparknotes version of a complex political process, it came at the expense of Euron's full introduction, which was somewhat glossed over in this version.

That's too bad, because on the page, Euron Greyjoy is one of the coolest characters in Martin's books. The differences start with his appearance; while Danish actor Pilou Asbæk is undoubtedly handsome and has that scruffy Greyjoy look about him, he bears little resemblance to Martin's description of a pirate with pale skin, long dark hair, an eyepatch, blue lips — a result of drinking shade of the evening, the same substance the warlocks of Qarth imbibed to grant them their magical powers — and a catchy nickname, the "Crow's Eye."

In the books, when Euron shows up to crash the kingsmoot (at which Balon's daughter is but one of many candidates), he is accompanied by his loyal crew: the mute sailors of Euron's trademark ship Silence, all of whom have had their tongues ripped out by their beloved captain. According to legend — and Euron himself — he has sailed the Silence to all the strangest corners of the world, including the smoking ruins of Valyria and the shadowlands of Asshai (where Melisandre hails from).

Furthermore, Euron doesn't end up winning the kingsmoot just because of some well-placed jabs at Theon's manhood (or lack thereof) and vague promises to Make Pyke Great Again. He emerges victorious because he brings two secret weapons with him: first, a lot of treasure accrued from his pirating around the world; and secondly Dragonbinder, an ancient and enchanted horn carved from the horn of a massive dragon. The sound of its blast will supposedly bind a dragon to the will of the horn's owner, with one pretty big drawback — it kills anyone who blows it, incinerating their lungs to ash.

When Euron has one of his crewmembers blow Dragonbinder, all the Ironborn quake in its presence and proclaim Euron their king. He then announces his intention to use Daenerys' three dragons to conquer Westeros… except he doesn't go to woo the Mother of Dragons himself. Instead, he sends his brother Victarion. And there's where another departure from the source material comes in.

In the books, Balon has not just one but three younger brothers: Euron, Aeron (a priest, referred to as the Damphair), and Victarion, the Iron Islands' most revered warrior and Lord Captain of their fleet. Euron and Victarion in particular have a contentious relationship, considering the Crow's Eye once raped and impregnated Victarion's wife. As a result, Euron was banished — and Victarion was obligated by Ironborn code to murder his pregnant wife with his bare hands in order to preserve his honor. The kingsmoot is the first time Euron has returned from exile since this tragedy.

So when the Crow's Eye is chosen as king over both Balon's daughter and eldest brother… well, let's just say things things are a bit tense in the Greyjoy household. But while the newly-elected ruler leads a raid on the Reach (home of Highgarden, seat of House Tyrell), it's Victarion who goes off in search of Daenerys Targaryen and her trio of dragons on his brother's bidding. Euron has promised Victarion the Seastone Chair once he himself has taken the Iron Throne; of course, Victarion has other plans, plotting to woo Daenerys himself and conquer Westeros — and his brother — with her help.

It remains to be seen how much of this might still make the translation onto the show. In the books, once Balon's daughter flees Pyke, she is captured by Stannis; but since Stannis is already dead on the show, perhaps Yara will instead sail to Meereen to win Dany to her side before Euron can. Obviously, Yara can't marry Daenerys (you know, since she's a woman), but she has someone with her who can: Theon. Together, Theon and Yara could essentially replace the missing character of Victarion. Of course, that would put them in direct conflict with the Crow's Eye… and if he turns out to be half as fearsome on the show as he is in the books, that could spell trouble for the Greyjoy siblings.