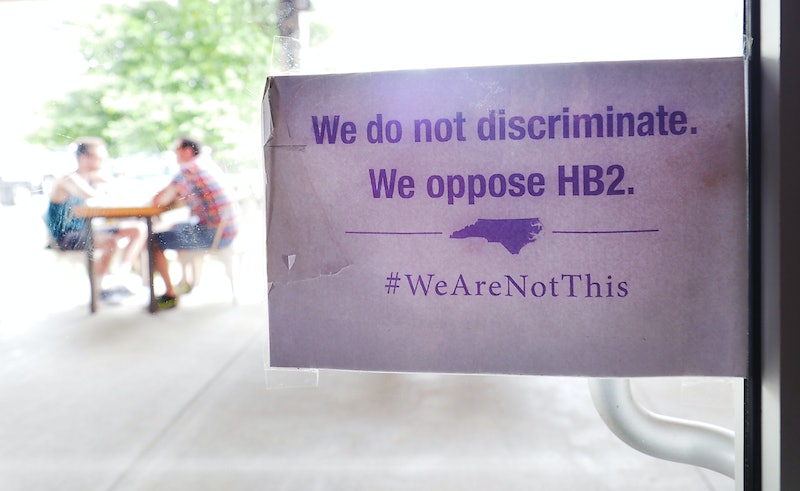 In his statement, York said that HB2 "does not reflect the values of our organization, of our country, or the majority of North Carolinians." York and the 49ers are not alone in their support of organizations fighting HB2, as they are joining the ranks of other famous and influential figures protesting HB2.

After the infamous law passed in late March, touring artists and businesses expressed their displeasure by cancelling shows in North Carolina and pulling their companies from the state in protest. Things got difficult for us North Carolinians, many of whom oppose HB2, as both our state and the nation seemed to be against us.

It's because of the initial backlash that celebrities have started to throw their weight behind NC-based organizations like Equality NC and Progress NC in their efforts to repeal HB2 and make North Carolina safe for all people to live their lives.

Since HB2 passed, numerous public figures have been using their clout (and money) to help North Carolina repeal this discriminatory bill. Most recently, Dave Matthews Band protested HB2 by announcing that they'd donate proceeds from their Charlotte show on May 27 to Equality NC and Time Out Youth, a Charlotte-based safe space organization for LGBT youth. The band also pledged to donate to the American Civil Liberties Union (ACLU), the ACLU of North Carolina, and Lambda Legal, a LGBT and HIV-rights organization.

Other artists protested the law in even more unique ways: The indie band Animal Collective not only had a Progress NC table set up at their Asheville show, but they also released two albums whose proceeds will go towards the charity. Punk rockers Against Me!, fronted by Laura Jane Grace, a transgender woman, made headlines for their choice to play a show in North Carolina despite the anti-transgender law. The band was also recognized for Grace's declaration of "Goodbye gender!" as she burned her birth certificate (on which she was assigned male) onstage at a show in Durham, North Carolina.

Other artists are using their platforms as well, from Beyoncé's statement about HB2 that urged fans to support Equality NC before her show in Raleigh to Demi Lovato's gender-neutral bathroom shirt worn onstage at the Billboard Music Awards. (The sale of the shirts will benefit Equality NC and Time Out Youth.)

Despite the unfortunate circumstances that led to the need for such public protest, these celebrities and public figures are sending an important message to LGBT people in North Carolina and beyond: that they see them, support them, and will fight for their rights to live in peace.