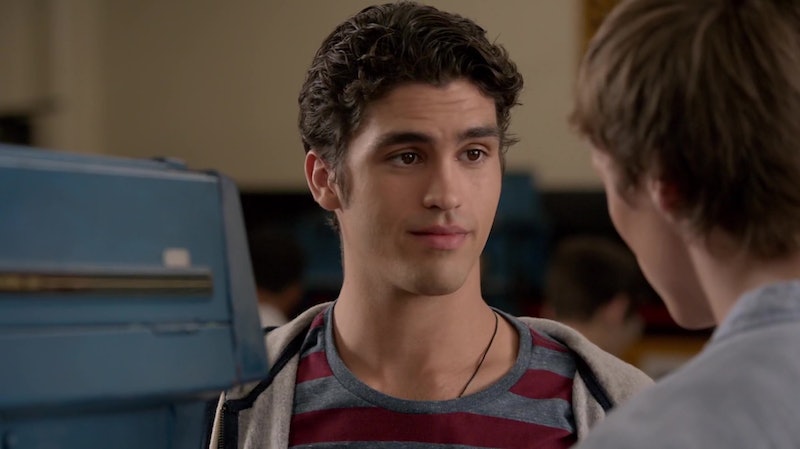 If there's one thing that I learned from the first season of MTV's slasher series Scream, it's not to get too attached to the characters. We may adore spending time with the so-called "Lakewood Six," but that doesn't mean that their heads aren't perpetually on the chopping block — the question is when the axe will finally swing down, not if it will. Unfortunately, it didn't take very long into Scream Season 2 to have the Lakewood Six reduced to the Lakewood Five. The season premiere seemingly offed one of the show's leads, and though we'll have to wait for the next episode to truly confirm if Jake is really dead, the brutal way the new killer sliced and diced him doesn't look too good for Brooke's snarky boyfriend. I'm calling it now: RIP, Jake.

Jake has been on Scream since day one, and he's gone through a huge transformation since the first episode. Fans first met Jake when he was blackmailing Brooke's dad with a potential murder video, and collecting dozens of other creepy videos of his friends and classmates. But Season 2 Jake was seemingly a changed man (witnessing your friends' murders will do that to you, apparently) and even became Brooke's "rock" while Emma was away seeking inpatient therapy. He's come a long way from the snarky jock who was only looking out for himself.

Sadly, Jake's transformation means that it's Brooke who will likely be hit the hardest when it's finally revealed that he was killed by another masked murderer. Brooke and Jake started dating after the events of Season 1, and it seemed like it was serious on both ends. Brooke confessed that Jake became a guy who really made her feel things, and we all heard Jake whisper "I love you" to Brooke when she was walking away from him at the pool. Unfortunately, Brooke pushed Jake away, something that she'll likely regret forever. If Jake truly is dead — and the gory scene of his attack suggests he is — Brooke will have to live with not telling Jake how she truly feels.

I'm heartbroken for both Brooke and us viewers, since now we won't get to see this newly tight-knit crew take down the killer as a unit. Of course, there's always a chance that the new killer is a member of the Lakewood Six themselves — and Jake's death might mean that we have one less person to suspect. Could one of Jake's BFFs be the one who killed him in that barn? Only time will tell, but in the meantime, let's hope Scream gives us all a chance to mourn Jake before reducing the group to a foursome.