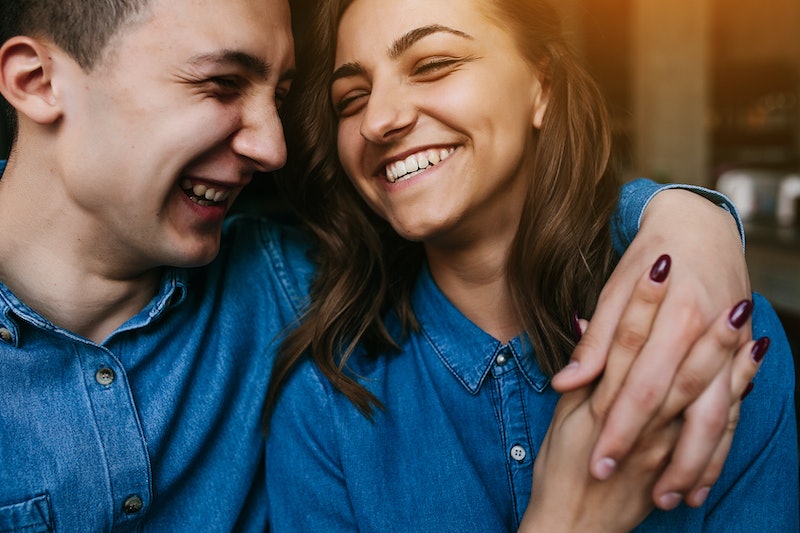 Just another Friday night, kicked back, maxin'-relaxin' with the bae. Maybe the two of you are in sweatpants, or track pants, or no pants at all, which is clearly a sign your partner feels comfortable around you, and that's really important. So what are the other ways you can tell that your partner absolutely, positively, definitely, without a doubt is at ease around you, no matter what? Well, it all boils down to some simple clues, according to relationship experts.

Though the feeling of ease around another human being is best described as just that — a feeling, rather than something to be articulated or analyzed or explained — there are ways to tell that your significant other feels significantly chill around you. This is a good thing, by the way: Though some would have you believe that letting down your guard in front of your partner is bad idea or a trap, that's a bunch of baloney. As long as you are doing so in a healthy manner, you're A-OK. Here are 13 ways you can ascertain whether your partner is comfy around you.

1. They'll Talk About Anything

“They are comfortable to discuss taboo topics; for some, that might be politics, for others, it might be sexual fantasies; either way, a taboo topic means that they are comfortable,” zen psychotherapist and neuromarketing strategist Michele Paiva tells Bustle. But taboos aren’t all fun and games. “If the taboo topic comes up too soon, they may lack boundaries; make sure this is a taboo topic after some closeness has been explored, and intimacy is grounded,” she says.

2. They Tell You Secrets Without Shame

Caitlin K. Roberts, founder of To Be a Slut and cofounder of I'd Tap That, tells Bustle that she knows her partner is comfortable around her when “he tells me the amount of times he's masturbated in a day, or what fast food he's eaten for lunch — not without guilt, but without shame.” Well said.

Janet Zinn, a New York City–based couples therapist, also agrees with Roberts’ hint. "When they tell you something that has been shameful to them, such as a time when they did something of which they are not proud — in example, a time they cheated on a test, or hurt someone’s feelings.” Though they aren’t happy about it, they don’t mind if you know, because they trust that you’re close enough that you won’t turn around and leave.

“Passing gas, not shaving legs, not putting her makeup on, leaving the door open when they use the bathroom, or [sharing] other bodily functions that feel private or judge-able [are all signs],” Dr. Ramani Durvasula, author of Should I Stay or Should I Go: Surviving a Relationship With A Narcissist , tells Bustle. Maybe your boyfriend has chilled out with the hair gel, or your girlfriend doesn’t wear makeup when you spend the weekend together. Whatever the case may be, if they’re relaxing their beauty routine, they’re feeling relaxed around you.

4. They Lend You Their Phone

“When you forget your phone or computer, and your partner lends you his or hers, you know they’re comfortable with you, because so much of one’s life is on those little machines,” New York–based relationship expert and author April Masini tells Bustle. Feeling secure with someone is all about trust. “That simple act of lending you a phone or a laptop means they trust you,” she says. Trust them, and lend them your phone when they need to order food and their phone is across the room. It feels good.

“I have noticed that those couples that have felt the most comfortable and secure with their partner show it in the form of trust,” dating expert Noah Van Hochman tells Bustle, echoing Masini’s sentiment. He sees this manifested in an IRL manner, rather than via phones or laptops. “This can be seen when you are at a party or event together where your partner is not tracking your every movement, but instead allowing you to do whatever it is that will make you smile without the need to crowd you,” he says. Awww. But it’s not just visible when you’re out and about.

“These [actions] can be seen at home as well,” he says, “as you can each go about your activities just enjoying the fact that you are there without constantly asking what you are doing and who was that on the phone.” Being unworried about your partner’s comings and goings is the foundation of chill. “The at-home part also includes the ‘be as you are’ philosophy, which is basically no makeup and moving about in your underwear,” he says.

6. They Talk On The Phone Freely Around You

"They freely talk on the phone to their parents and close friends around you,” Stefanie Safran, Chicago's "Introductionista" and founder of Stef and the City, tells Bustle. This means that they feel fine about letting you in on the little details of their life, and they’re not afraid you’ll discover too much or overhear something you shouldn’t.

7. A Phone Call Just Because

“A clear sign that your partner is at ease with you is when he [or she] calls you to share with a minor detail in his [or her] day,” relationship coach and transformational speaker Sherica Matthews tells Bustle. When your partner calls just to say hello, or tell you something funny that just happened, that’s key. It’s the sweet and lovely thought that counts — and reminds you that your partner is feeling casual with you.

8. They Let Down Their Guard

“One clear sign that your partner feels at ease around you is that they feel comfortable talking about anything with you,” Shlomo Slatkin, who founded the Marriage Restoration Project with his wife, Rivka, tells Bustle. Whether it’s a topic that is ordinarily off the table, as Paiva suggested, or something else entirely, this is vital. “We are, by nature, protective until we feel fully safe with another,” Slatkin says. “When we are able to let our guard down and really open up, it is a clear sign that we feel at ease with the other.” And then we get to really know another human being.

9. They Know You Won’t Judge Them

“You know that your partner truly feels at ease and comfortable around you when he or she feels like … you won't pass judgment on the things that he or she may reveal to you,” relationship coach and psychic medium Cindi Sansone-Braff, author of Why Good People Can't Leave Bad Relationships , tells Bustle. Judgment is a bitch, and no one wants to feel as though their partner is peering down on them from a golden pedestal. “You just listen and let the conversation flow. No censoring, no condescending, no correcting: You just let your partner let the guard down and relax,” she says.

What could be better than that? Allow your partner to be their cheesy, silly, fun self. “Nothing is too silly, too outrageous, or too personal to talk about,” she says. On the flip side, “There's nothing worse than being around someone who makes you feel like you have to walk on eggshells and watch everything you say and do.” When you feel free, you feel comfortable around your partner, and that is the best.

10. They’re Happy To Talk About You To Friends

“I think it is the little things,” psychologist Nikki Martinez tells Bustle. “They are free to be themselves, to joke around, to express their opinions, to be honest with you, to sit around in sweats all day.” In other words, Martinez says it’s a mixture of various hints that other experts have already mentioned. When you and your partner are in a restful place together, your boo isn’t afraid to look and ridiculous, she says. Also, they’re happy to shout your happiness from the rooftops. “They have no issue telling others all your good qualities,” Martinez says.

11. They Aren’t Afraid To Disagree

“In the beginning of a relationship, it's typical to try to present your best self to your partner,” life coach Kali Rogers tells Bustle. “A lot of times, that comes out as agreeing with a lot of their statements. So it's really important that couples disagree with each other from time to time.” Not necessarily fight — though that can be important too — but gentle is OK. “So, when you make a statement about anything — a film, food, viewpoint, etc. — and your partner disagrees with you, it's a sign they aren't trying to conceal their true selves and they can be at ease with their own opinions.” Which is a very good thing! So don’t shut them down — let them have their opinion, and honor it.

12. You Can Be Silent Together

“A clear sign is when you and your partner can be together in companionable silence,” relationship coach and psychic medium Melinda Carver tells Bustle. Though silence can feel uncomfortable, it is the exact opposite. “Most people feel awkward and fill the silence with nonstop chit-chat or annoying questions,” she says. “Let's say you are walking in the woods and resting at a waterfall — if you two can enjoy the moment together silently, you are enjoying a companionable silence.” This is key! So don’t try to start up a convo. “No need to fill it in with silly comments,” she says. “This shows you are comfortable just being with your partner and enjoying their presence, without having to chit-chat nonstop.” Word. Or, you know — no words.

13. They Know How To Make You Laugh

Not only does your partner have a good sense of humor, they know what to do to tickle your funny bone, Tina B. Tessina, aka Dr. Romance, psychotherapist and author of Love Styles: How to Celebrate Your Differences , tells Bustle. They can joke in a loving way and really want to make you laugh, you’ve got a partner who not only loves you but feels content and comfortable around you, she says. Hooray! Three cheers for that.