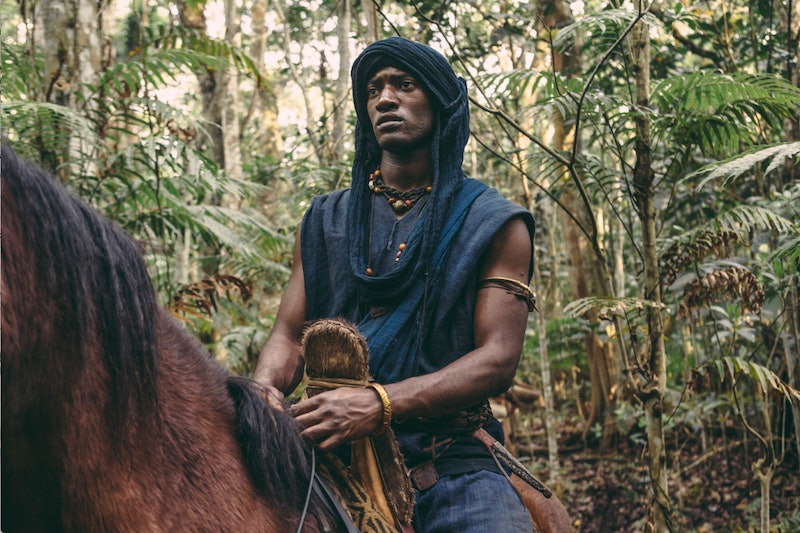 The groundbreaking 1977 miniseries Roots and its powerful characters have returned to the spotlight, as a remake of the series will be simulcast across History, A&E, and Lifetime, over four consecutive nights beginning Monday, May 30. Roots follows Kunta Kinte and his family, from their origins in Gambia to their forced upheaval to America as slaves. Considering the historical context of his life, viewers may be wondering if Kunta Kinte was a real person as Roots follows his family over the course of eight hours.

Roots is based on Alex Haley's book of the same name and according to CNN, the author said that Kunta Kinte was his own great, great, great grandfather. And though there has been controversy over how much of Haley's book is factual, it seems that Kunta Kinte was indeed a real person, even if, as CNN reported in the same article, Roots may contain inconsistencies with his exact lineage.

The director of Boston University's African American studies program, John Thorton, served as the historical advisor to the Roots remake and wrote about Kunta Kinte's real life for The Huffington Post. He detailed how the Kinte family arrived in the Gambian town of Juffure a generation before Kunta was born and worked as merchants. The real Kunta was sold into slavery in 1767, despite his family's middle-class status. CNN also reported that Gambians still consider him to be a real person, with Gambian historian Lamin Ceesay showing the host of CNN's Inside Africa an old advertisement for slaves and saying that it featured the boat used to transport the real Kunta.

Just because Kunta existed, however, does not mean every detail of his life shown in Roots is accurate. In an interview transcribed by the Alex Haley Roots Foundation, writer Lawrence Grobel asked Haley if he prefers to describe Roots with a different word than "novel," to which Haley replied, "Faction. I saw that word in a book in London. It means a mixture of fact and fiction ... With Roots, I worked my head off to research everything and still a lot of the book is fiction."

This may account for some of the inaccuracies cited by experts and genealogists who questioned the authenticity of Roots. The New York Post detailed how some of the dates, lineage, and documents of Roots do not line up and reported that the BBC found a tape of Haley interviewing Juffure's oral historian, in which he and Gambian officials seem to be skewing the historian's answers to fit Haley's story.

All of this is to say that Kunta Kinte seems to have been a real person, and though details of his life may have been changed for Roots, his name deserves to be remembered.