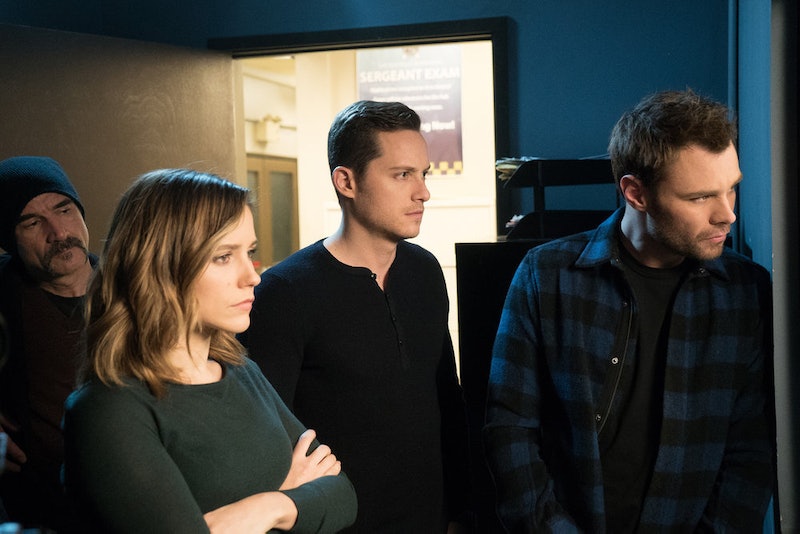 As Chicago P.D.'s third (and possibly best) season comes to a close, the question of what could happen to Voight, Platt, and Sophia Bush's totally rad Lindsay must arise. Luckily, I come with good news, which is that the entire gang will be back to say "heck yes" to justice when Chicago P.D. returns for Season 4. In fact, the Chicago family overall is getting even bigger, as the original show, Chicago Fire, has been renewed for Season 5 and the newest spinoff, Chicago Med, has gotten the greenlight for Season 1.

As for Chicago P.D., the series has yet to be officially placed on the NBC schedule, but it seems likely that it will continue airing during its regular Wednesday night time slot — that is, unless the introduction of Chicago Med scrambles the Chicago series' lineup. Either way, it's highly likely that Chicago P.D. will be back on-air in time for fall premiere season during the last week of September, judging by the premiere dates of the show's previous two seasons.

This means that not only is the fall looking totally stacked with plenty of Chicago Fire fun, but also that the Dick Wolf-produced drama will be on hiatus for the summer season. And though you might usually blunt the four-month wait with some accidental late-night marathons of the magically addictive Law & Order: SVU, the miracle of streaming can open the door into a whole new world of well-executed crime shows. Here are five stellar streaming picks to give your summer a nice little punch of suspense.

Just in case even Netflix's surplus of fantastic choices can't fix those very specific Dick Wolf withdrawals, the streaming service has got seasons upon seasons of SVU. There are so many episodes that you probably could make it to September on this series alone — but where's the fun in that?

James Spader has pretty much been the king of cool since John Hughes' Pretty in Pink, but the uber-versatile actor has maybe never been better than in The Blacklist. He stars as a notorious outlaw who suddenly turns himself over to the FBI on the condition that he work with a very specific rookie profiler, and while The Blacklist is certainly more serialized than Chicago P.D., it has enough episode-to-episode payoff to convert any viewer.

An import from the UK, Broadchurch breaks one of the most common conventions of the crime series by blurring the line between investigator and suspect. It's a two-season series, with an overarching mystery covered in each, and the performances, especially the one from Dr. Who alum David Tennant, are seriously something to write home about. If that weren't enough, the constant intrigue makes the show even more marathon-worthy than SVU. And that's saying something.

There's a reason Criminal Minds is one of the longest running crime shows on TV today — it's really, really good. Not for the squeamish, the show puts viewers directly into the minds of the killer before spending the rest of the episode unspooling their often very demented thought processes.

Easily the lightest show on this list, White Collar is an effervescent platonic ideal of the crime series, and serves easily as a light-hearted palate-cleanser to the other gritty and stressful shows on this list. Who doesn't need that?

Clearly, there's plenty of great stuff to watch before Chicago P.D. finally makes its way back into our lives this fall.