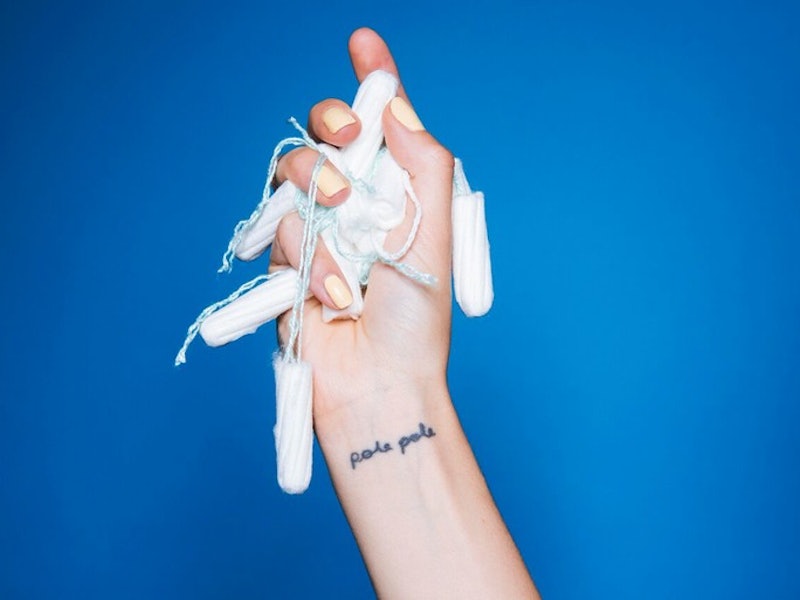 After generations of being relegated to the margins — shrouded in stigma, a source of embarrassment, or, at best, invisible — periods have gone political. And that’s not just because Donald Trump catapulted the phrase "blood coming out of her wherever" into the presidential race, when he accused Fox News commentator Megyn Kelly of menstruating while moderating last summer (as if that's something worthy of an accusation). Badass menstrual activists captured headlines throughout 2015 — so much so that NPR dubbed it "The Year of the Period," calculating that the number of times the word menstruation was mentioned in five national news outlets (The New York Times, CNN, Los Angeles Times, Chicago Tribune, and USA Today) more than tripled from the combined five prior years. Cosmopolitan magazine proclaimed it "The Year the Period Went Public."

In 2016, a slew of powerhouse lawmakers have championed the cause. A primary policy priority: eliminating the notorious tampon tax. Generally, states exempt food and other “medical necessities” from sales tax. Chapstick meets the criteria. Tampons? Not so much. In 40 U.S. states, sales tax exemptions do not extend to menstrual products. Who possibly could have decided that tampons are not a necessity? Certainly not anyone who has ever had a period. Upon further examination of the kinds of other items that are exempted — a bag of BBQ sunflower seeds (Indiana), a box of Pop-Tarts (California), even gun club memberships (Wisconsin) — it becomes ever harder to justify taxing tampons.

As a lawyer, writer, and one of Bustle's anointed badass menstrual activists, here are my ideas about how we can call upon our representatives to ensure a comprehensive, meaningful menstrual policy agenda, from the tampon tax — and beyond.

Now, as state legislative sessions begin to wind down, there’s both good news and bad news to report. The good news: Legislators in 15 states have fought to ax the tampon tax. Lawsuits have been filed in three states. To date, the tax has been eliminated in Connecticut (effective 2018) and in the City of Chicago. The legislatures of New York and Illinois each recently passed bills, which now await their respective governors' signature.

And the bad: Bills were killed in Utah, Tennessee, and Indiana. In Utah, an all-male panel cited fears of a too-subjective tax code (a specious claim from a state that already exempts arcade game tokens); and in some truly twisted logic, an Indiana state senator argued that eliminating the tampon tax would alleviate a financial burden for only those who menstruate, and is therefore a sexist proposal. The fight in the other nine states where bills were introduced — including high-profile campaigns in California, Michigan, and Wisconsin — will rage on next term. Clearly, there is still a long way to go until the tax is eliminated nationwide.

But sales tax reform only scratches the surface. Taking on the tampon tax sends a message about fairness, equity, and necessity; it even lifts a small financial burden. But it doesn't go nearly far enough. For those who are struggling, a tax savings of pennies on the dollar isn't likely going to provide anything close to real relief — which brings us to these other five issues below.

It is an issue of educational equity. Inability to access menstrual products can affect attendance at and productivity in school. A problem that long has been documented in developing countries, many are shocked to learn this is also an issue at home. In the United States, nearly one in five teenagers live in poverty. The cost of tampons or pads, at $7 to $10 each month, can be one expense too many for struggling families.

New York City, under the leadership of Council Member Julissa Ferreras-Copeland, introduced legislation to mandate the provision of tampons and pads in all of the city's public schools, after holding teen focus groups and piloting a project this year (which has already seen increased attendance rates in the inaugural site — up from 90 percent to 92.4 percent in just six months). This groundbreaking bill will be debated at City Hall next week.

For those with access to Flexible Spending Accounts, $2,550 can be set aside annually for a wide array of medical expenses and related products, from breast pumps to baldness treatments. Tampons, pads, and other menstrual products are ineligible for inclusion because of the way they are coded by the Internal Revenue Service. Obviously, this is absurd. U.S. Congresswoman Grace Meng has introduced a federal bill that would require the IRS to reclassify menstrual products so that they can be purchased with pre-tax dollars, causing a significant savings.

And then there’s the fact that tampons and pads are currently excluded from grocery purchases made with Food Stamps (formally known as the federal Supplemental Nutrition Assistance Program). It’s high time to lobby for that change too.

4. Ensure Access For Those Who Are Homeless, Displaced, Or Incarcerated

To those without a nickel to spare — or without a roof overhead — a sales tax break or employee benefits are meaningless. Yet menstrual products are as much of a monthly necessity — and in many ways, the urgency is even greater, and the impact more devastating, for those who do not have access to clothing, underwear, laundry facilities, or private showers and toilets. The New York City schools legislation described above also includes mandating the provision of tampons and pads in the city's homeless shelters, as well as its corrections facilities, where inmates are systematically denied sufficient supply of pads to meet their needs. Other states, like Wisconsin and South Carolina, have called for public agencies to stock their restrooms so their clients have access.

Federal emergency relief is another policy avenue. U.S. Congresswoman Meng convinced the Emergency Food and Shelter National Board Program, administered by FEMA, to allow shelters to purchase menstrual hygiene products with grant funds; prior to her recommendation, toothpaste was an eligible expense, but not tampons.

5. Demand An Answer To The Question: What’s In Our Tampons?

The time is now (or really, yesterday) for passage of the Robin Danielson Act, first introduced by U.S. Congresswoman Carolyn Maloney in 1997. (And reintroduced eight more times since then. Shameful, the resistance of Congress to address this.) Named for a woman who died of Toxic Shock Syndrome, the bill would require resources for independent research into the potential hazards posed by the synthetic fibers and chemicals used in the production of tampons, as well as urge the FDA to disclose the list of ingredients in tampons, pads, and other period supplies.

“American[s] spend well over $2 billion per year on [menstrual] hygiene products, and the average [person] will use over 16,800 tampons and pads over the course of a lifetime. Despite this large investment and high usage, there has been limited research on the potential health risks these products may pose,” Maloney says.

6. Make Sure Menstrual Health Policy And Activism Is Inclusive

Menstrual policy — and the movement to destigmatize periods — must extend to all who bleed, and recognize that the experience of transgender and gender-nonconforming people has been forced into the shadows for too long. It's a challenge, given that the vast majority of people who menstruate are cis women, and that so much of menstrual taboo is rooted in centuries-old misogyny.

But a comprehensive policy agenda must extend to all whose health, dignity, and safety are at risk. This entails developing inclusive health care, education, and counseling services in schools and public agencies. It also requires speaking out about the attempts of backward lawmakers to stoke public restroom phobia and prevent trans people from using facilities that match their gender identity. Managing a period in public can be tricky enough. If even the simple sound of tearing open a tampon wrapper can undermine one’s safety, we've got real work to do.

With all of this momentum, we must keep on elevating the dialogue and demanding sound policies — starting, but certainly not ending, with sales tax reform — that recognize menstrual access, affordability, and hygiene for what it truly is: a matter of public health, economic parity, and gender equity.

More like this
25 Inspiring Quotes From Black Women To Celebrate Black History Month
By Kyli Rodriguez-Cayro and JR Thorpe
6 Organizations Fighting Police Brutality That You Can Support Right Now
By Syeda Khaula Saad and JR Thorpe
The Case For Following A Menstrual Cycle Workout Plan
By Emma McGowan and Carolyn Steber
Flip Phones Are Gen Z's Favorite New Nightlife Accessory
By Maria Santa Poggi
Get Even More From Bustle — Sign Up For The Newsletter
From hair trends to relationship advice, our daily newsletter has everything you need to sound like a person who’s on TikTok, even if you aren’t.