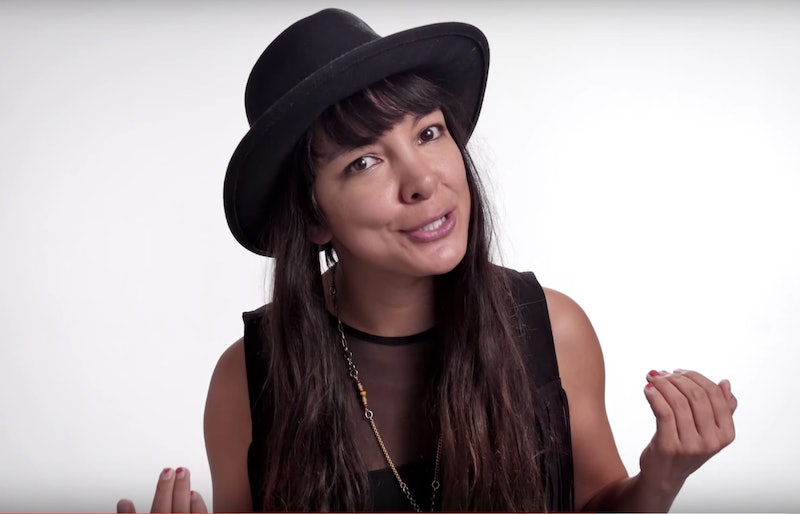 Unfortunately, almost none of us are exempt from the taboo that still surrounds menstruation. Seventeen percent of women who participated in a survey with the International Women's Health Coalition and the health app Clue said they have missed various events in their lives because they are "afraid of someone finding out" they have their period. And worldwide, many girls are often encouraged to stay home from school rather than attend schools with unhygienic bathroom facilities; in fact, the New York Times reports that a shocking 23 percent of Indian girls drop out of school once they reach puberty in large part for this very reason.

Luckily, there are some badass menstruation activists out there who are fighting back against period stigma. All across the globe, they're changing the way we talk about vaginas and bleeding, and they're encouraging us to open up about our own experiences. To find out more about them, Bustle spoke with Lana Friesen, founder and organizer of the Blood Cycle Conference, a brand-new event coming up in September that will be the first of its kind. It's a conference dedicated to women and their menstrual health, where people from all around the world will come together to discuss the issues menstruating individuals face on the regular. A big part of planning this conference for Friessen was familiarizing herself with the women out there who are making a big splash in the menstrual health and taboo conversation. She told Bustle about the women who have inspired her the most, and I added a few picks of my own to the list.

Here are seven menstrual activists you should know about.

You may have heard of Jen Lewis and her project, "Beauty in Blood." Instead of shying away from our own period blood, like society tells us we should, Lewis has embraced her body's natural fluids and chosen to make stunning pieces of art out of it. Her goal is to normalize the menstruation process. "One day, when I had some blood on my fingers after emptying my cup, I started to wonder about why society framed up menstruation as something disgusting," she told the Huffington Post.

The blood you see in every piece is her own, poured from her menstrual cup into the water, where you can witness the unique flow and free movement of the liquid. She started by taking shots in the bathroom with the help of her husband Rob Lewis, and they later moved to creating the photos in a fish tank. While there have been some less-than-enthusiastic responses to her work, Lewis said there has been a flood of positive support, proving that there is a demand for this kind of honest art focused on the reality of having a period.

When Miki Agrawal launched THINX in January 2014, she wanted to make an anti-microbial, leak-resistant period panty that actually looked and felt like a pair of underwear an everyday woman would want to wear — and she did just that. Now, the company's ads are everywhere on NYC subways, breaking the period taboo every day. Even better, THINX is working with and donates to a Ugandan NGO called AFRIpads, which hands out reusable, washable pads to women in developing countries who are in desperate need of menstrual hygiene products.

Agrawal has also spoken up strongly about the fact that there are thousands of women and girls around the world who cannot make it to work or school because of the lack of access they have to things like tampons and pads. In fact, the United Nations reports that only 43 percent of girls in developing nations attend school, partly due to the fact that, without the necessary products, they can't go anywhere during the week of menstruation — and Agrawal is doing more than her part to help change that.

For the last two decades, Briden has been working as a naturopathic doctor who specializes in women's menstrual health. She now works in Sydney, Australia, at the Sensible-Alternative Hormone Clinic, where she helps treat countless women who face polycystic ovarian syndrome (PCOS), thyroid disease, and severe PMS symptoms.

Last year, she published a book called Period Repair Manual: Natural Treatment for Better Hormones and Better Periods . Astoundingly enough, as much as we've started to talk about periods more and more, PMS is a topic that is still widely under-researched. Briden has given women everywhere a text that breaks down a lot of the misconceptions about natural hormone production and our cycles. By empowering women with information and helping to break down the taboo of menstruation, Briden is quickly becoming one of the most influential voices in the menstrual activist community.

Based in Toronto, Canada, Rupi Kaur is a poet and artist whose haunting works are focused on femininity, sexual abuse, and the menstruation taboo. Last year, she went viral when Instagram removed a picture she posted because it simply showed her menstrual blood staining her pants (they later apologized for the offense).

Kaur also recently released a book called Milk and Honey , which features her drawings as well as her original poetry. One of her pieces chips away at the heavy burden women must bear when keeping quiet about their periods: "apparently it is ungraceful of me /to mention my period in public /cause the actual biology /of my body is too real."

You can follow Kaur on Instagram (@rupikaur_), where you'll find similar prose and beautiful art celebrating our bodies and reproductive systems. Subscribe to her YouTube channel too, where you can watch her spoken word performances that highlight the everyday struggles of women in today's society.

Jennifer Weiss Wolf is an attorney and the Vice President for Development at the Brennan Center for Justice. Menstrual health advocacy is one of her strong suits, and she recently joined forces with Cosmopolitan and Change.org to start the first "No Tax on Tampons" petition in the U.S.. They've drummed up more than 58,000 signatures so far.

You may have also seen her profound article on Huffington Post at the start of this year called "Blood in the Streets: Coping with Menstruation While Homeless." She's using her platform to raise awareness about the menstrual hygiene struggles low-income women face in our own backyard, highlighting the high rates of infection and illness. She profiles several homeless women who don't have access to products such as tampons or pads because they are so expensive. Her public work is making it impossible to ignore this widespread menstrual health issue.

You may have heard about Gandhi last year, when the then 26-year-old decided to run the London Marathon while freebleeding. It was her first time at the marathon, and she wasn't going to let her period stop her from participating in the event. But instead of running it with a tampon in or a pad on, she went free, sending a message to women everywhere that your menstrual blood is nothing to be ashamed of or limited by.

Gandhi is basically the coolest ever: she's a graduate of Harvard Business School, a successful drummer (she went on tour with M.I.A.), and menstrual activist. And she hasn't slowed down since that marathon. Just last month, she joined Jennifer Weiss-Wolf on a panel at NYU's Women's Herstory Month in order to discuss the class-action lawsuit filed against the state of New York for the tampon tax. She said, "Because we don't talk about [menstruation] at a young age everyone is so awkward about it, so then we feel this body hatred." Her hope is that empower women to be open about their bodies and reduce stigma about menstruating.

She's currently using her solo music project Madame Gandhi to speak more about menstrual taboo. Using the stage as her platform, she speaks to her audiences about the significance of last year's marathon, noting that while freebleeding was her choice, for thousands of women around the world who don't have access to feminine hygiene products, it is anything but. Those are the people she's fighting for.

After being diagnosed with PCOS and experiencing conventional treatments that simply didn't work for her, Lana Friesen realized that many of us aren't equipped with enough information about how our reproductive systems really function. So she used her professional event planning skills to put together The Blood Cycle Conference in Vancouver, which will take place on September 3 and 4.

"I feel like there is a menstrual health revolution happening," Friesen tells Bustle. "I wanted to put on a conference that I would want to attend myself." She is bringing together some big players in the menstrual activism community, including Jen Lewis and Lara Briden, and Madeleine Shaw and Suzanne Siemens, the founders of LunaPads. Every person brings a different conversation to the table, and the conference will cover everything from contraception options to the tampon tax to menopause. When you get yourself a ticket to the conference, you can then vote on which topics you find to be the most important. With this event, Lana aims to educate women on their own menstrual cycles, help activists network, and create a safe space for everyone to speak freely and honestly about what it means to menstruate. Pretty badass.