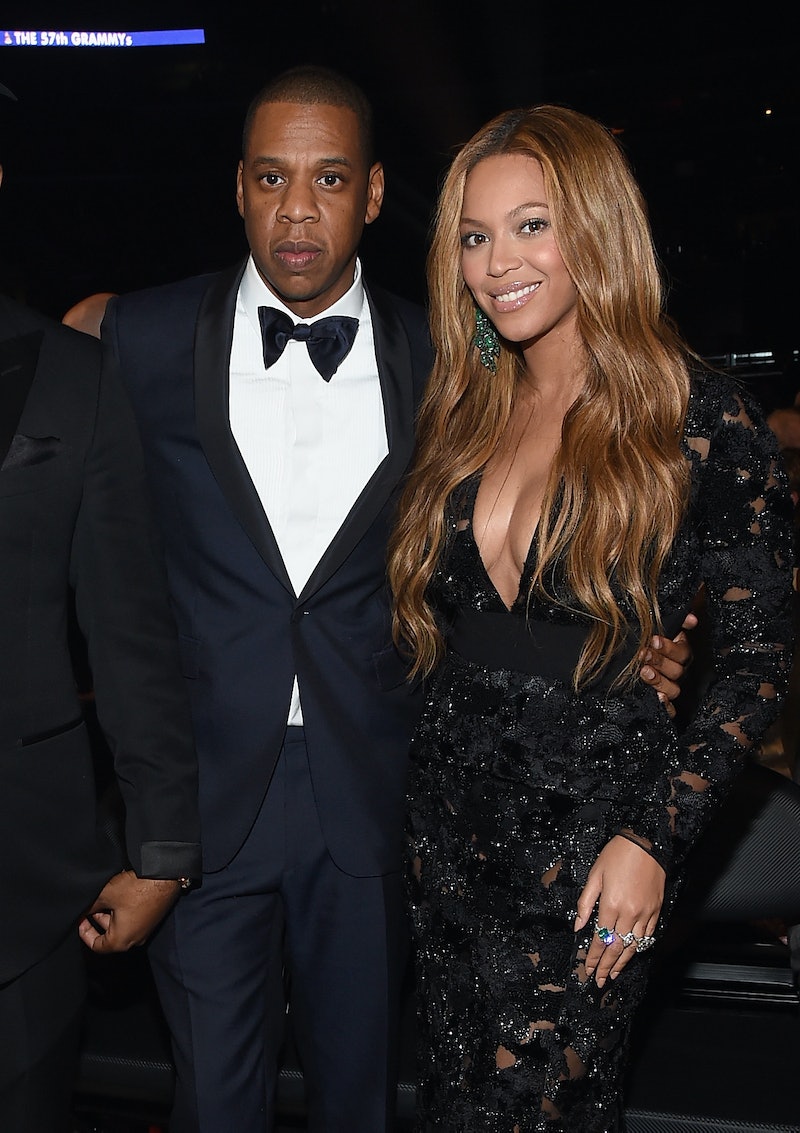 Well, if you still aren't convinced that power couple Beyoncé and Jay Z are A-OK post-Lemonade, you just might now. No, I'm not referring to Jay Z's "All The Way Up (Remix)" lyrics responding to Lemonade, where he basically says the he and his wife are totally fine. Instead, according to several sources who spoke with E! News, Beyoncé and Jay Z had an amazing date night in New York City. The idea of them going on a date sounds totally normal, but the information detailed by the sources sounds kind of like fan fiction. It almost seems like the inside details are coming from a huge Bey and Jay fan wanting everyone to believe the two are really, really happy. If you don't believe me, check it out for yourself and you be the judge.

While dining at Mario Batali's Del Posto, apparently Bey and Jay Z not only had a super romantic night, but they were also very affectionate. Per one insider, "Jay held her hand in and out of the restaurant, but inside they sat close and looked like they were enjoying each other's company." The source also said they had "no quiet moments," unlike in the past when "they would go to eat and not speak." During their meal of pasta and "shared" appetizers (aren't appetizers supposed to be shared?), "Beyoncé had a big beautiful smile on her face as she was looking and talking to her husband during the meal. They looked like a happy couple who were having a great date night."

Their outing didn't stop there, because a different source also told E! News that upon leaving the restaurant around midnight, Bey and Jay "looked happy" and were in "really high spirits." That same source added about their walk to the car, "Beyoncé was excited a fan handed her security a bottle of Moët. She was happy about it, accepted it and smiled."

Maybe Beyoncé and Jay Z shippers don't think the above sounds out of the ordinary, but the account of their "great date night" just seems way over the top. Obviously, they could've been very happy dining together and maybe they even couldn't take their eyes off one another, but the details almost sound like they're coming from some Bey and Jay super fan who just wants them to be ridiculously happy — and wants everyone else to believe it, too. It's kind of like their happiness is being forced in a way and to fit the mold of a picture-perfect couple, despite all of the rumors. They could truly be extremely happy in their marriage at this point in their lives, but, again, it just seems like their date night is being stretched into something someone may or may not write as part of their Bey/Jay fan fiction.

All that aside, it is great to see Jay Z and Beyoncé hanging out with smiles on their faces. I'm sure that makes some people who have been conflicted about their relationship status feel a bit more at ease. Though, I'm sure there are a few people, fans included, who don't need some elaborate detailed-account of their dates or any source to convince them otherwise.