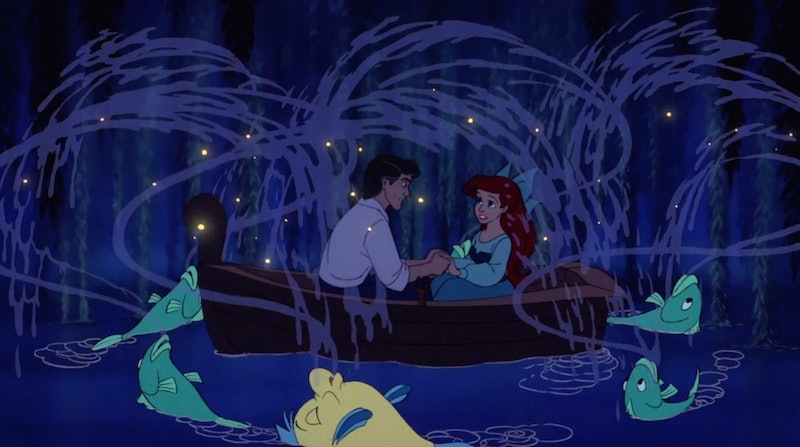 Tons of Disney animated movies are getting the live-action treatment. Cinderella was brought to life in 2015 with Lily James as the titular soon-to-be Princess, while The Jungle Book soared into theaters this year with some of the most insane CGI animals to ever grace the big screen. Disney has seen the success of giving classics the reboot treatment, so it makes perfect sense that just after releasing the gorgeous first trailer for its upcoming fairytale adaptation of Beauty And The Beast to 91.8 million views in the first 24 hours, the company may already be considering creating a live-action version of another Princess tale. According to Deadline, Disney is in talks to create a live-action adaptation of The Little Mermaid , and though the remake isn't official, it's a smart move for the studio to consider. However, should Disney go through with the adaptation, it won't be the only recent Little Mermaid movie on the block.

Though it's hard not to equate The Little Mermaid with the 1989 Disney film, the story was originally penned by Hans Christian Andersen, and is far darker than Ariel's journey we all know and love. In the original version, the little mermaid is also given the chance to walk on land, with one caveat: if she cannot convince the Prince to marry her, she will die. When he falls in love with another woman, the little mermaid is given the option of killing the Prince, or killing herself. (She chooses the latter.) Disney may be interested in adapting their kid-friendly version to the big screen, but a different live-action version of the classic fairytale has actually already been in the works for years apart from Disney: Electrick Children director Rebecca Thomas will helm the live-action version of The Little Mermaid from a script by Love, Actually writer Richard Curtis, and according to star Chloe Grace Moretz, who will play the titular mermaid, the upcoming Little Mermaid film was intentionally separate from the Disney property.

Moretz told Digital Spy that Thomas' version of The Little Mermaid will be surprising to audience members who might be expecting a more sanitized version of the original tale:

I think it's going to be really different to see the Little Mermaid on screen [because] we're going to show the story that we really want to show, which is not the Disney one... It's the Hans Christian Andersen story. And it's going to be darker, and it's a little bit more interesting, and it's definitely more naturalistic.

There are so many ways to adapt a fairytale, and though both Little Mermaid films would be based on the same source material, they will likely be vastly different movies. I'm excited to see whether or not Disney really does make a live-action adaptation of their 1989 film a part of our world — and how it stacks up to Thomas' upcoming feature.