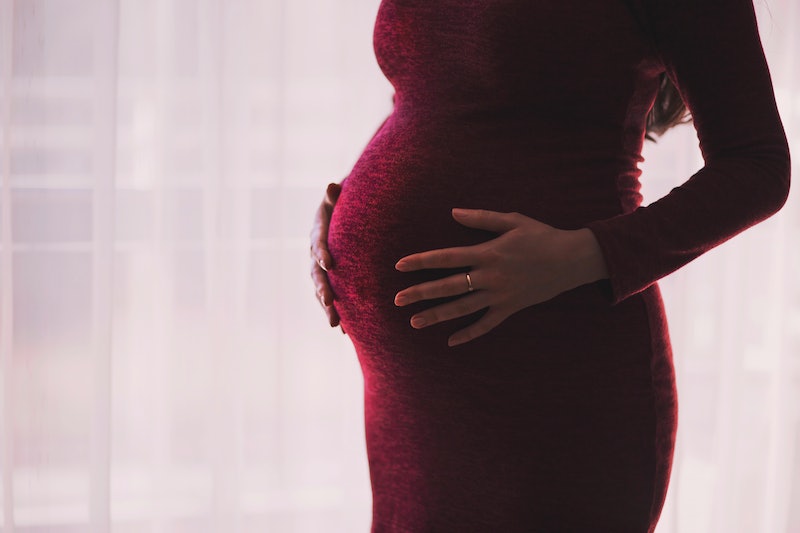 The first thing that comes to my mind when I think of an unplanned pregnancy is a teenage girl who can't fully enjoy her prom because she's too busy thinking about how to tell her parents about her pregnancy test results. That, or Ellen Page's hilariously charming character in the movie Juno. If you think about it, we've all sort of been duped into thinking that teenagers are the most vulnerable bunch when it comes to surprise pregnancies: After all, we're surrounded by reality TV shows about teen moms and we've been warned from a young age by our parents that teenage pregnancy will mess up our lives. Odds are, the connection between being a teen and unplanned pregnancy been drilled into our heads for as long as we can remember.

It takes no more than a single glance at reliable research, though, to see that teenagers aren't the ones who most find themselves in this sort of pickle. Seven out of every 10 pregnancies among single, educated women in their 20s are unplanned, and a woman in her 20s is three and a half times more likely to unexpectedly become pregnant than a teenage girl. In 2011, the Guttmacher Institute reported that women between the ages 20-24 were the most likely to experience unintended pregnancy. In fact, 81 out of every 1,000 women in this demographic became pregnant that year. The scariest part is that women in this age group are often almost as ill-equipped, both financially and psychologically, to handle a baby as high schoolers — which puts a lot of stress on these suddenly pregnant individuals.

Bustle spoke with Ginny Ehrlich, CEO of The National Campaign to Prevent Teen and Unplanned Pregnancy, who tells us that the vast majority of women in their 20s report that they're not ready for motherhood (86 percent of them, to be exact), yet 40 percent of them aren't using birth control regularly. "There's a slight disconnect between intention and intentionality, if you will," she says. We may say over and over again that we aren't ready for a baby — but our actions don't seem to reflect our words.

It's not that these unexpectedly pregnant 20-something women are irresponsible, careless, or lazy. The reality is much more complicated than that. For starters, the sex ed we received as prepubescent youngsters hardly makes the cut. We don't know enough about our bodies, our reproductive systems, or sex itself to make sound decisions all the time. In fact, one survey from a few years ago found that 50 percent of young adults don't even know which part of a menstrual cycle a woman could become pregnant during.

"Good sex education is really important," Ehrlich notes. "What we learn in middle school... there’s a lot that happens between that time and our 20s." The problem is we're not provided with the resources to learn about those changes as they happen to us. We don't know who to ask or where to find the answers. Plus, there's a lot of misinformation out there, like that myth that rogue sperm swimming in a pool can impregnate you. No wonder any talk about sex and babies gets a little confusing when we're moving from adolescence to the adult life.

There are also the lifestyle changes to consider. We generally live under our parents' roof until we're 18, and then most of us get abruptly dropped into a pool of youthful independence, whether we're attending college or living on our own for the first time. There are no more curfews or lectures about completing chores, and there isn't really anyone to answer to. Ehrlich notes that, during this period, there's "so much independence, so many different decisions, so many different things happening in life." We seize the opportunity to do whatever we want, which often includes sex. This is both normal and totally awesome, but it happens at a crucial time in our development when we're still likely to make rash decisions — particularly if we aren't given the proper tools to recognize which choices lead to serious consequences.

Black and Latina women, women living in poverty, and women with low levels of education in their early 20s are disproportionately more likely to become pregnant unexpectedly than their age group counterparts who are more educated, belong to other ethnic groups, or have higher socioeconomic status — likely because those women have more access to health services or sexual health information, as well as strong cultural expectations that they avoid unplanned pregnancy.

However, it's of the utmost importance to note that there has actually been a noticeable decline in the last few years in unplanned pregnancies. Since 2008, there's been an 18 percent decrease overall. Between 2008 and 2011, the number of unintended pregnancies fell to the lowest in 30 years, according to the Guttmacher Institute. Forty-five percent of all pregnancies were a surprise in 2011, compared to the 51 percent in 2008. (Still, though, that's a pretty a high percentage.) These drops were the same across the board, meaning women from all demographics were seeing a shrinkage in surprise pregnancies.

"We suggest that the decline is likely due to increases in the use of contraception," a representative of the Guttmacher Institute said in a statement. It's more common than ever for women to be using extremely effective methods such as an IUD. Ehrlich agrees and tells Bustle it also has to do with the fact that our society has simply become more open to talking about birth control. She thinks "the norm change around the importance of using reliable contraception and being more intentional" has made a big difference.

Another reason may be the fact that nearly everyone is in agreement that we need to do a better job educating girls and boys about sex and its possible consequences. Eighty-six percent of adults give the green light to policies that make it easier for people over 18 to get their hands on birth control. Seventy-seven percent of adults support programs that make contraception and related health services available to individuals living in low-income neighborhoods. I don't know about you, but I was pleasantly surprised by these numbers.

It's more important than ever that people support these programs, because the consequences of suddenly finding out you're pregnant extend farther than you might think. Unplanned pregnancies and births have been definitively linked to a higher likelihood for depression in the future, and a woman who is single when she has her first child is up to 2.7 times more likely to live in poverty, regardless of age, race, and socioeconomic status.

Also, the health of a woman who suddenly finds out she's pregnant may suffer. Katharine O'Connell, M.D., OBGYN at New York Presbyterian Hospital in New York, told Self, "Unplanned pregnancies are at higher risk for complication, both for the woman and the fetus or newborn." There could be premature births or birth defects, which can affect the mother's health, too. Clearly, this is about so much more than having to make some lifestyle changes. This is a women's health issue.

Ehrlich believes that our society will continue to see the impact of unplanned pregnancies in young women. We have to keep educating ourselves and each other in any way possible. That's why The National Campaign created Bedsider.org, an independent website that provides us with a boatload of information about reproductive health, especially about birth control methods. Everything on their site is created by seasoned experts and professionals who have a lot of experience under their belt — so the medical content there is to be trusted.

“We spend a lot of time in our friend networks in our early 20s. We find our people, and then we protect our people,” Ehrlich tells Bustle. "There’s power in camaraderie among young women." So why not access that support system and teach each other about reproductive issues? She recommends we share the information we learn and the good experiences we have. Teach each other, learn from each other, and stay curious about how we can keep bringing down the numbers of unplanned pregnancies every year. Because every young woman deserves the chance to feel fully in control over if and when she wants to get pregnant.