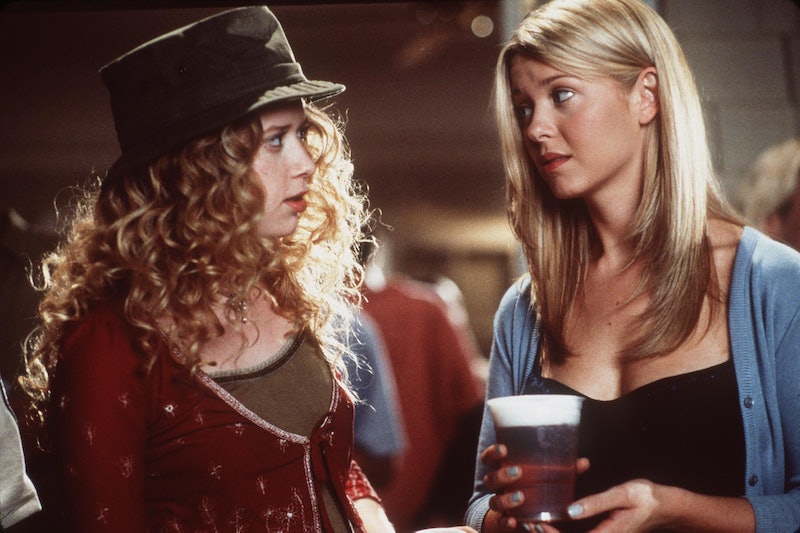 In fact, even years after we realize how weird that guy Tony was (He was 19! Why did he want to play Sega with a bunch of 10th graders??), we still hold on to the messages of some of those early sex lessons, whether we realize it or not. Even the most enlightened among us may still have moments where we wonder if using two condoms might make us safer than one, or fear that the number of sex partners we have had has rendered our vaginas "loose" and the thus the sensation of intercourse with us is like the proverbial "throwing a hot dog down a hallway."

It's not our fault — it's hard to forget dumb stuff you learned as a tween (that's why you still remember so much about The Simple Life). So don't feel ashamed if this stuff burbles up in your brain from time to time. But to help fight it, you can take our refresher course in debunking the sex myths you learned growing up — or better yet, pay it forward by presenting this information to any young person in your life who might still believe that a hot tub is a legitimate method of birth control.

1. Myth: Having Lots Of Sex Will Make Your Vagina "Stretched Out"

The Thinking: Your vagina is like a fine cashmere sweater or a Stretch Armstrong doll, and can lose its shape due to enthusiastic overuse.

The Truth: Your vagina does not get "loose" or "stretched out," no matter how many times you have sex, how many partners you have sex with, or whether the kind of sex you prefer involves a pull-up bar, a Shake Weight, and a sea captain's hat, etc. Period. End of story. Sex does not change the shape of your vagina. I mean, you've put a lot of food in your mouth through the years; has that turned your cheeks and lips into a big floppy mess? Nope! Because your mouth is full of muscles, and so is your vajay.

Vaginas come in different shapes and sizes to begin with, like every part of our bodies. But when you're talking about a vagina's "size" or "tightness," you're mostly talking about its musculature. Your vagina is one muscular orifice. You can tighten and loosen your vaginal muscles any time you want; go ahead, do a Kegel right now if you don't believe me. When we're not aroused — either due to inadequate foreplay or engaging in an inherently unsexy activity, like shopping for a sectional at Ikea — our vaginas are folded tightly, and tough to enter. But our vaginal muscles typically loosen when we are aroused so that the object of our choice can get up in there.

So the "tightness" often attributed to the vaginas of virgins is actually probably just vaginal muscles tensed in anxiety. So the issue isn't that you get "loose"; it's that you loosen up and start getting relaxed enough to enjoy sex.

Even childbirth doesn't necessarily permanently change the size of a vagina. According to some researchers, a vagina will be back to roughly its pre-birthing size six months after giving birth. The only real thing that can influence the tightness of a woman's vaginal muscles is age — as we get older and our estrogen levels drop, our vaginal muscles do become less elastic. But odds are, that's a long time away for you. If you'd like better control of your vaginal muscles, you can always practice Kegel exercises. But you are definitely not getting "loose" from enjoying yourself.

2. Myth: Your Hymen Is A Thick, Solid Piece Of Skin

The Thinking: I don't know, are there other kinds of skin?

The Truth: Yes, there are! A hymen isn't a just solid piece of skin, pulled tight across your vagina like a drum head. Rather, it's porous (which is how menstrual blood can get through). Nursing professor Carol Roye described it to Our Bodies Ourselves as a "a fringe of tissue around the vaginal opening." And so, any bleeding or pain you experience while losing your virginity isn't a result of your hymen "popping," but rather some tearing of this fringe. Which makes sense — if losing your penis-in-vagina virginity felt like having a thick piece of skin ripped open, who on earth would want to do it? I mean, have you ever torn an earlobe? Now imagine that, in your vagina. Now imagine ever wanting to have sex ever again. Tough to picture, right?

3. Myth: You Won't Still Be A Virgin If You Use Tampons

The Thinking: Virginity is an abstract concept outside of space and time, defined wholly by the absence of anything ever having been in your vag.

The Truth: OK, virginity is an abstract concept — which is why something as silly as a tampon can't mess with it. First off, virginity has nothing to do with your hymen. As you may recall from the sensitive sex education books for kids of your childhood, you can easily break your hymen while riding a bike, doing gymnastics, performing an enthusiastic dance number in your local community theater production of Annie, or engaging in any number of other wholesome activities.

Tampon use could break your hymen, but virginity is about sex, however you choose to define it, rather than the state of your hymen. You're still a virgin until you have sex with someone (whether that's p-in-v sex or sex of the non-hetero variety). And guess what? Tampons don't necessarily even break your hymen — plenty of people, including yours truly, used tampons for years as virgins, and were still able to engage in the traditional rite of heterosexual deflowering, with blood on the sheets and a painful sensation in your vag and everything. So don't worry!

The Thinking: Men are gross sex dogs, and thus not responsible for their actions if they treat you in a less-than-respectful manner when it comes to sex. Because, you know, sex!

The Truth: This fact has been debunked to the moon and back, but a concerned parent (or a snickering frat guy) has probably said this to you anyway. Well, here's a hot truth injection for the brothers of your local chapter of Slamma Gamma Boner: According to a 2012 study conducted at Ohio State University, men think about sex an average of 19 times a day — but they also think about food an average of 18 times a day, and think about sleep an average of 11 times a day. So don't cut a dude slack if he treats you disrespectfully because he "thinks about sex all day." He thinks about food just as much, but you wouldn't let him cut in front of you on line at the burger fixins bar, right?

6. Myth: You Can't Get Pregnant If You Have Sex In A Hot Tub

The Thinking: The sperm will swim away into the epic, boiling tides around them, sparing your ovaries and making your godmother regret that she let you stay in her beach house.

The Truth: If you're having penis-in-vagina sex in a hot tub or pool, your vagina does not fill up with water — your vagina is still filled up with penis, and thus the penis is still able to shoot its swimmers into your vagina, where they could theoretically swim into your uterus, and eventually make you feel like a real idiot for thinking that a hot tub is a substitute for a condom. Also, consider saving the sex for outside the pool — honestly, it doesn't even feel very good! The water in the pool can ironically make your vagina less lubricated.

The Thinking: More latex between you and your partner = more barriers, more safety, and possibly more boning (since the double-condom method is also recommended to help dudes last longer).

The Truth: This myth, perpetrated by a toxic coven of older brothers, the first American Pie movie, and bro-rap pioneer

Asher Roth, forgets about one of the basic elements of banging: friction. Just as sex is full of all kinds of fun friction, it can also be full of bad friction — like the friction of two condoms rubbing against each other, which can make them rip and tear. This goes for wearing a male and female condom at the same time, too. So two condoms are actually less safe than just one condom. Trust that one sheath of rubber is enough. And if you can't, invest in an additional form of birth control, like the pill, or only sleep with people whose STI testing status you're familiar with. I mean, it's better than explaining to a child that they exist because you took a joke in a late-'90s teen sex comedy at face value, right?