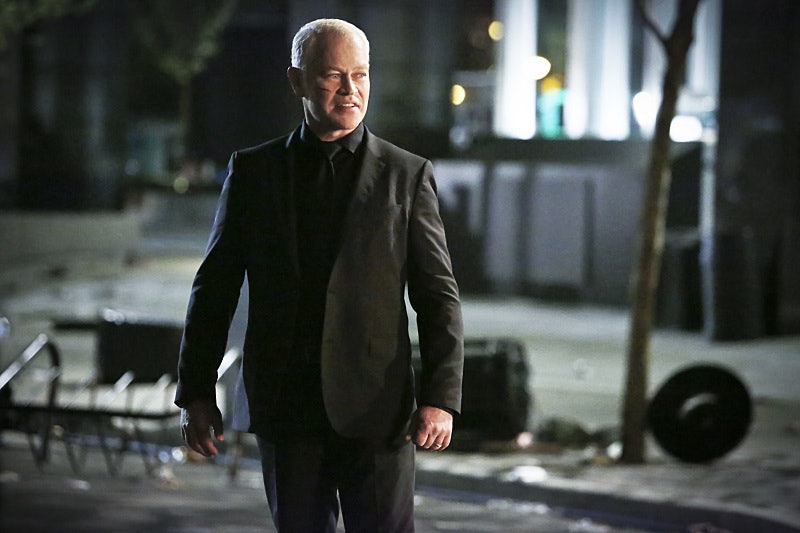 Alright, I'm just going to come out and say it. Damien Darhk is not now, nor has he ever been, a very nice guy. Ever since he set foot in Star City he's been hellbent on destroying it. (All for the "good of the world," of course.) And after an entire season of watching him rise to power and flex his magical muscles, it appears as though this Big Bad may actually be gone for good... or is he? Did Damien Darhk really die in the Arrow Season 4 finale? After all, if these superhero shows have proven anything, it's that death doesn't always have to be a permanent thing, especially when you bring supernatural elements into the equation.

A few weeks back Oliver discovered that if he was able to take in enough hope and light, it could counteract Darhk's magic so that he'd be immune. Granted, his hope alone wasn't enough to do the job after Darhk consumed so many souls after the Havenrock incident, but thanks to Oliver's rousing speech to the people of Star City, their combine hope was enough to finally give Oliver the upper hand he needed to face Darhk in an actual fair fight.

In the end, good triumphed over evil (as we knew it would) and Oliver made the decision — for the good of the city and the world in general — to take Darhk down once and for all. He stabbed Darhk in the chest with an arrow, supposedly killing him. But is that really the end to Darhk's story? With so many shows in the DC Universe being connected, it's hard to say if this is the last we'll ever see of this Big Bad. For the time being, though, it seems like Team Arrow is free from Darhk's wrath. Let's just hope it'll stay that way come Season 5.