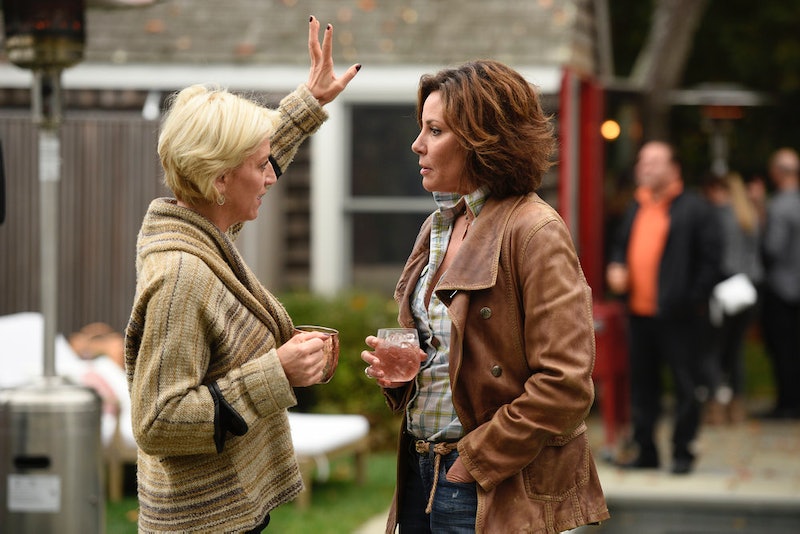 Oh, Sonja just really can’t catch a break on Real Housewives Of New York, can she? First, she loses out on that whole toaster oven deal, then she files for bankruptcy, then she starts a prosecco company called Tipsy Girl and Bethenny goes crazy on her. There are a lot of other missteps in there, but those are the big ones. Due to her drinking problems and general craziness (and because Bethenny is still mad at her for blatantly copying her alcohol business), Dorinda opted not to invite Sonja to her birthday in the Berkshires, and Sonja was pretty upset.

I can see both sides of this whole thing, and so can Luann, who is currently staying with Sonja on the Upper East Side. Sonja has a lot of problems, but at the end of the day, I think she’s just desperately trying to hold on to her old life, and she really needs her friend around her for support. On the other hand, Sonja drinks too much, lies a lot, rips off her friends’ ideas, and then denies all of it. Oh, Sonja. Luann really went to the mat for Sonja, saying that it was wrong of Dorinda not to invite her simply because Bethenny had a fight with her. Bethenny said that she would never dictate a guest list, and the circle went on and on and on.

I do feel for Sonja. I really do. It really hurts to be excluded from things, but when Sonja needs people the most, she really seems to burn her bridges. She used Bethenny for business advice, essentially stole her business plan and name, and then played dumb about it. Like Bethenny said, you can’t be smart and stupid at the same time. So which is it with Sonja? That remains to be seen, but I can see how her invite got lost in the mail this time around.