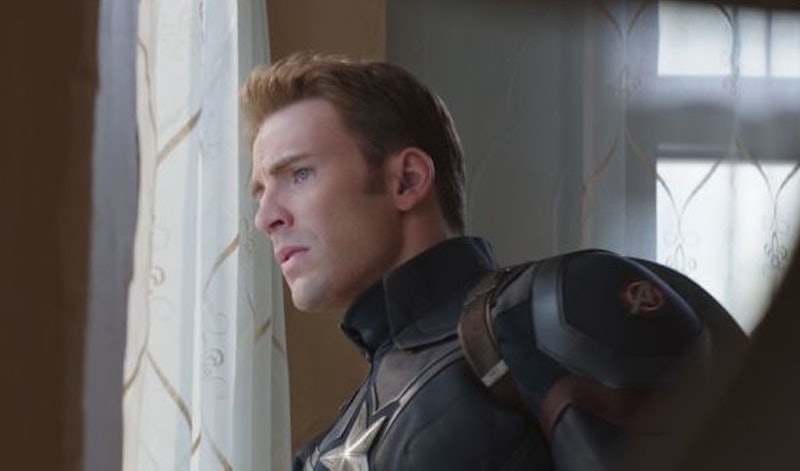 #SayNoToHYDRASteve. At least, that's what Captain America fans agreed should happen on Twitter this past Wednesday when the World War II hero's latest comic book revealed the unthinkable: That Steve Rogers is actually an agent of Hydra. And he's been one this whole time. On Thursday, Chris Evans, the star behind the on-screen portrayal of the hero, has taken to Twitter to speak out on the news. Suffice it to say, Evans' response to the Captain America reveal is more in-line with that of the fans. However, his short and fairly-unreadable online response just makes me even more confused. I mean, there's no way that the Marvel Cinematic Universe could play into writer Nick Spencer's whole idea that Cap is actually a Hydra agent. Could they?

Since the plot lines for Marvel films from now until 2019 are already planned out, it seems like the direction the studio is heading in won't incorporate this controversial new storyline. It's on the writers and directors of the films to decide which comic book story lines to bring to the film screen, but Evans weighing in on the whole situation makes me really worried. On the one hand, it's great that the actor behind Captain America is in agreement that Steve Rogers of the comics should say no to the whole Hydra thing. But, on the other hand, I'm seriously hoping that this isn't an allusion to the fact that this plot twist might be coming to a theater near you in Phase 4 of the MCU or something.

Unfortunately, however, there really is no way of knowing what the future may hold. But I agree with the fans who believe that there's no way this storyline will survive past the next few issues, no matter how the writers choose to somehow undo it. And, hopefully, if it peters out in the comics, then we never have to deal with that reality on the big screen either. We loyal fans did not do anything to deserve such an undesired plot twist.

It's OK. Everything's going to be OK. Chris Evans is just as taken aback as we are, and, hopefully, this whole idea will just disappear into the background.