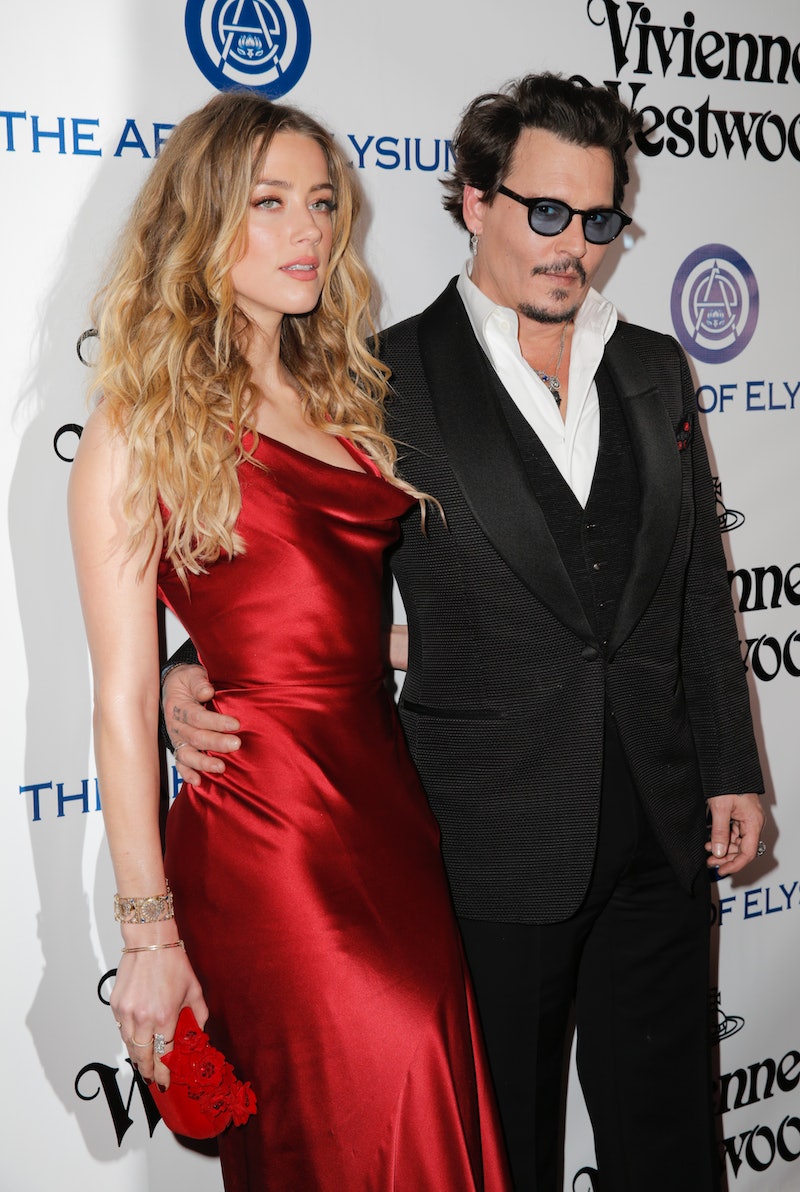 Sad news on the celebrity front. According to documents obtained by CNN, Amber Heard filed for divorce from Johnny Depp, just a few months after their one-year wedding anniversary. The news shocked me, and I didn't notice any obvious signs that they were headed in this direction. Was it the strain of their careers? The embarrassment of that Australian apology video? Whatever the case, it is sad news from a formerly very happy couple. For those fans mourning out there, I thought I'd walk down memory lane and find these some sweet quotes from Depp and Heard about their romance, that now, once was.

I always want to believe that celebrity couples can actually make it through the craziness of fame and Hollywood, but this was not the case for Heard and Depp. I admired that they tried to keep certain aspects of their lives as private as possible, but couldn't help showing their affections for each other. They were so head-over-heels, they seemingly couldn't wait to be married back in February 2015, and had not one, but two wedding ceremonies: in his Hollywood home and on his private island in the Bahamas.

It is disappointing to see this happen to a couple that once couldn't not say wonderful things about each other, and always in a way that was unique to their relationship.

When Their Love Of Music Brought Them Together

For me, common music tastes is very important in a relationship, and Heard and Depp met on a mutual level that just screams romantic. I just imagine them sitting around in their perfect, bohemian, country-style home listening to records and drinking whiskey. Depp shared with E! News at the premiere of The Danish Girl about what attracted him to Heard,

We connect on a lot of levels but the first things that really got me was she's an aficionado of the blues. I would play a song, some old obscure blues song, and she knew what it was... She's very very literate. She's a voracious reader as I have been, so we connected on that as well and she's kind of brilliant and beautiful... I'm a lucky man.

When Amber Loved Being A Step-Mom

Heard shared with Marie Claire in December 2015 that being a step-mother to Depp's children Lily-Rose and Jack was an added bonus to her marriage. She said,

When Their Relationship Was A Perfect Fit

Heard shared in Elle 's July 2015 issue that her life after marrying Depp wasn't that different, which I thought was an inspiring thing to say. They seemed to respect each other's individuality in their union, which was admirable and said a lot about their marriage. She said,

Nothing is a dramatic change. We've been together for a long time now, so it's been a fairly organic process. I have a fiercely independent spirit.

When Johnny Gushed About His Love

In a chat with The Mirror in 2014, Depp opened up about why he and Heard had a connection that defied all odds. He said,

In many ways I am everything she wouldn’t want to be with and in a lot of ways she’s everything I wouldn’t want to be with, because actors and actresses... it’s not an easy deal. But she has a good perspective on her career and one of the first times I sat down with her I was astonished at how smart she is... There’s a really strong, brilliant woman in there who has a lot to say.

When Amber Supported Her Husband's Talents

In an interview with C Magazine in November 2015, Heard spoke of Depp's knack of challenging the Hollywood system and living by his own rules, which she was keen on following. She said,

I think that it takes people like him who have the ability to change and challenge this very old and tired system. And I think he and I are looking for our own ways to do that. I want to see him get behind the camera and direct.

Since the beginning of their unlikely romance, Depp and Heard expressed their love and admiration in a very special way, and it's sad to see this unique couple go their separate ways. There has been lots of love and respect between them and hopefully, not all is lost.