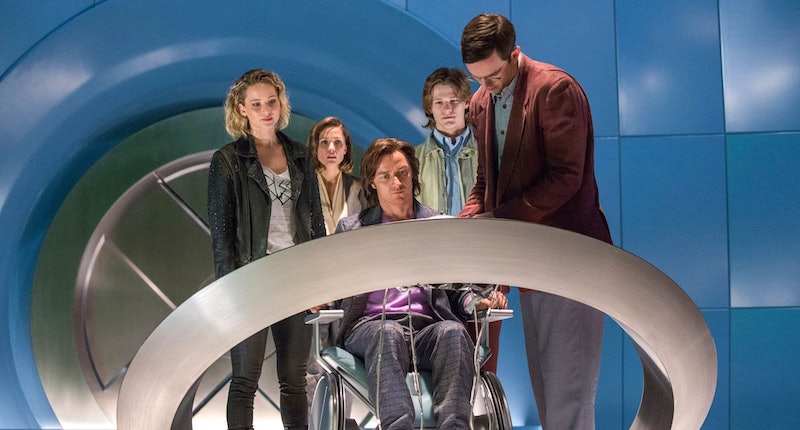 Get ready to have your heart broken by X-Men: Apocalypse. You can't name a movie Apocalypse without including a few deaths along the way, and the newest X-Men installment doesn't disappoint. The movie sees the deaths of a few key characters in the X-Men franchise, but before you get to upset, remember that the movie could have brought the deaths of every X-Men character, and the world — new villain Apocalypse is not playing around. While Apocalypse declares that he would prefer not to kill fellow mutants, there's no question that he will go after anyone — mutant or otherwise — who stands in his way. So, if you're asking who dies in X-Men Apocalypse , you might also want to ask who dares to go against Apocalypse. Spoilers ahead!

Civilian casualties aside, Apocalypse takes great care not to kill too many of its mutant cast. And, yes, that includes Mystique. Despite the rumors that Jennifer Lawrence's Mystique would die in Apocalypse , the shape-shifting mutant is still walking the Earth by the end of the film. In fact, most of the main reboot cast is left still breathing — Magneto, Professor X, and Hank emerge from their fight with Apocalypse unscathed. But that doesn't mean the deaths in X-Men: Apocalypse didn't hit home. These are the biggest X-Men: Apocalypse deaths, ranked by heartbreak.

By far one of the most heartbreaking deaths in X-Men: Apocalypse is that of Havok, aka Alex Summers, who dies trying to stop Apocalypse from abducting Professor X. When he unleashes his plasma blasts at a teleporting Apocalypse, the clash causes an explosion that takes down the entire mansion. Thanks to Quicksilver, no one is hurt, save Havok, who dies. What makes the death so sad is the arrival of Havok's younger brother, Scott (Cyclops!), whose relationship with his sibling was growing after he developed his mutant power.

On a tragedy scale of 1 to 10, this one ranks at a 9. Following the events of Days of Future Past, when Magneto attempted to kill the President, Magneto has been on the run. An international fugitive, he's made a life for himself in Poland, working at a factory and living a peaceful life with a wife and young daughter. Though he has been able to live under the radar by not using his powers in public, one day at work he manipulates metal to save a fellow worker, and people notice. Before he can get out of town with his family, local policemen come for him, armed with bows and arrows. Magneto is ready to surrender as long as they let his daughter and wife go, but his daughter, who is young and has no control over her mutant powers (she can communicate with animals), freaks out the policemen and they kill her and her mother.

The death of Magneto's family is crucial, as it directly leads to his willingness to join Apocalypse and engage in the end of the world as we know it. It also leads to other deaths. After Magneto holds his dying wife and daughter in his arms, he kills the policemen and goes to his factory to kill the men who betrayed him. Oh, Magneto, you were doing so well! Of course, he doesn't actually kill his co-workers, Apocalypse shows up and does it for him. RIP, Polish steel workers.

A new version of Angel, who previously appeared in X-3: The Last Stand, is recruited by Apocalypse to be one of his four horsemen. He's a fighter, used by Apocalypse as a kind of bodyguard, who gives his life protecting Apocalypse against the X-Men in the final battle. To be fair, with his Apocalypse-given metal wings, it's possible Angel survived to see another day. But, if his death is, in fact, real, then it's a shame. He might have been fighting for the wrong side, but he was still pretty cool.

Before Wolverine was Wolverine, he was Weapon X, a government weapon/experiment used by Major Stryker. In Apocalypse, Wolverine is set loose on a super secret military base as Jean Grey, Scott and Nightcrawler break Mystique, Hank, Quicksilver, and Moira out of the base. With his memory wiped clean, Wolverine is less an X-Men, more of a killing machine. When he's set loose, he slashes every single guard on the compound, allowing the kids to get Mystique, Hank, Quicksilver, and Moira out of Stryker's custody.

The nature of Apocalypse's mortality is still in question, so, it might be premature to declare him dead, but the ending of X-Men: Apocalypse certainly suggests that Apocalypse has been defeated for good. I think I speak for everyone when I say that he will not be missed.

Civilians were clearly the greatest casualties in X-Men: Apocalypse, and how that might affect the X-Men franchise going forward remains to be seen. The deaths of Havok and Magneto's family will likely have a bigger impact on the story in future films, and will certainly not stop breaking our hearts any time soon.