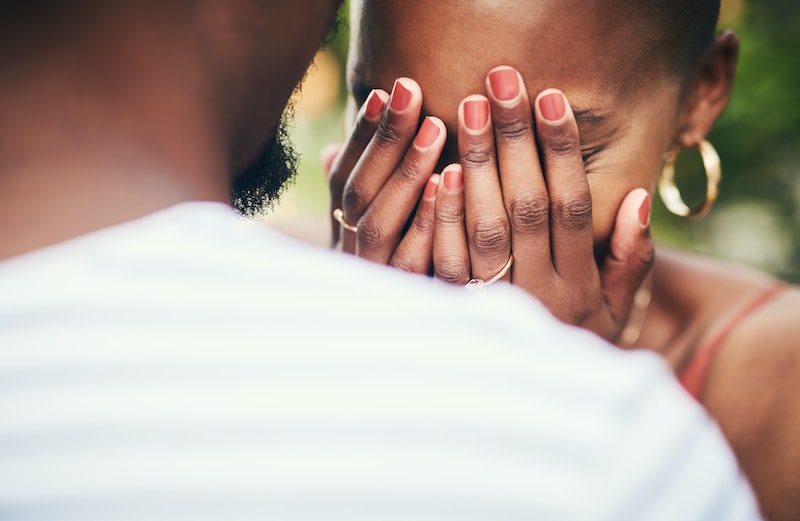 The sauce is never quite as awkward as it is when you have a crush on a friend — except, of course, when you have a crush on a friend who is already taken. Then the sauce is decidedly less palatable. There is the rational, sensitive, morally-sound part of your brain that is like Liz Lemon-style "SHUT IT DOWN," but that's the problem: if it has been going on long enough for you to acknowledge it, it's too late to stop it. You've just got to brace yourself for the ugly wave and let it smack into you, because it's already too late to duck under.

I know better than to try to give advice on what to do in such situations — first off, because the one time it happened to me, I became a Veritable Human Disaster (TM) and did probably everything you're not supposed to do (oh, college). And second off, every situation is different, and I don't know your life. Maybe the person you're crushing on is secretly ~the one~. Maybe you're crushing on them because unconsciously you're bored, and need something to fixate on. Maybe it's one of a thousand other possibilities that engineer our brains to think this inconvenient thoughts and our hearts to have these inconvenient feelings — but despite the motivations and despite the circumstances, there are a few things that remain the same across the board. Namely, all the awkward things you do when you have a crush on someone who already has a partner.

You Attempt To Go Cold Turkey On Them And It Works For, Like, Eight Seconds

If only it were that easy. You realize pretty quickly just how objectively mean it seems, and when you have no way to rationalize it without giving yourself away, you end up backtracking, awkwardly apologizing, and carrying on as if it never happened. Way to go, team.

At lunch with your friends. On the phone to your mom. With your dentist elbow deep into your root canal. You can't talk about how you really feel without feeling like a terrible person, so you start leaking like old boxed wine and leaching into all the corners of disinterested parties' conversations.

You’re Secretly Pleased When Someone Mistakes You For A Couple

You Secretly Want To Befriend Their S.O.

It's this weirdly voyeuristic, undoubtedly selfish compulsion: you want to get to know them because they mean so much to this person to who means something to you, and by getting to know their partner, you have a better understanding of them. But this is also creepy AF, so you also start ripping yourself into emotional shreds as soon as the idea crosses your mind.

Ah, yes. The age old riddle. Will the ~magic~ be gone just as soon as they become available? Are you just ultra-competitive, and some sick part of you wants to "win" them? Why are you even thinking about it, when there is no reason for them to become available in the first place?

You Have Vivid, Alarmingly Specific Fantasies Of Their Partner Breaking Up With Them

Oh, yeah. This. In the perfectly plotted romance novel of your life, their partner breaks up with them, somehow absolving you of any responsibility and of the secret lusting you did in the stage wings all through their relationship. Their partner becomes The Bad Guy instead of you — sweet, heroic you, who swoops in to mend your crush's broken heart like the Zooey Deschanel character you were born to play.

And yeah, you are possibly going to hell for the number of nights you fall asleep fantasizing this down to the last detail, but that's an issue for another day.

Sure, it would be easier to borrow someone's gun and shoot yourself in both feet, but this is admittedly less messy. Plus, there's a selfish part of your brain that's like, If their relationship goes south, it won't be because of me. I totes tried to help so my conscience is entirely clear.

Psst, check out our podcast, I Want It That Way, for all things sex and relationships.

You Go On An Online Dating Frenzy

"I'll show them!" you declare, grabbing a bottle of rosé out of the fridge, fully aware that in all likelihood they don't remotely care.

In a totally casual but somehow aggressively un-casual way. This kind of stuff never comes up organically, but dammit all if you won't make it come up organically. And then take extensive mental notes on every twitch of their brow and word that comes out of their mouth to pore over later to a totes not-obsessive and supes healthy degree, pfft.

"Do you have Empire Strikes Back on DVD" is code for "Let's run away together," right? ... Right?

You Spill All Your Tea To A Random Third Party

When you finally can't take it anymore, you spill your guts out to someone in your social circle who is very far from theirs. You figure you're safe. It's off your chest. Or at least it is for, like, a day. And then ...

You Spill It All Over Again To Someone Who Knows Both Of You, Because #Woops

It would be a nightmare if they told your secret ... or would it be? Because if you're being honest, part of you kind of wants to be caught. Part of you likes that it's "out of your hands" now if they find out. Part of you is turning to a Batman villain and you are powerless to stop it.

You Get Irrationally Furious At The Object Of Your Affection

To be fair, some of the time this is totally warranted. In these situations it usually takes two to tango — the crush flame rarely sparks unless the person in question has done something to ignite it. But that doesn't mean it's socially acceptable for you to randomly cold shoulder them or chew them out, because they were clearly taken from the start. That part is black and white. It's the gray area that sends you into a #rage, but the law of gray area, unfortunately, is not on your side.

You Have Approximately 86,000 Existential Crises Because You’re “Not This Type Of Person”

Spoiler alert: there is no "type of person" who has crushes on people who are already spoken for. We are all secretly that type of person, and we only find out if and when the circumstances ever arise. That being said, it doesn't make it any less suck-y when it happens, or make you feel like any less of an terrible about it.

In any case, if this has happened to you in the past, mad props for surviving! And if it's happening to you right now ... welp. Godspeed.