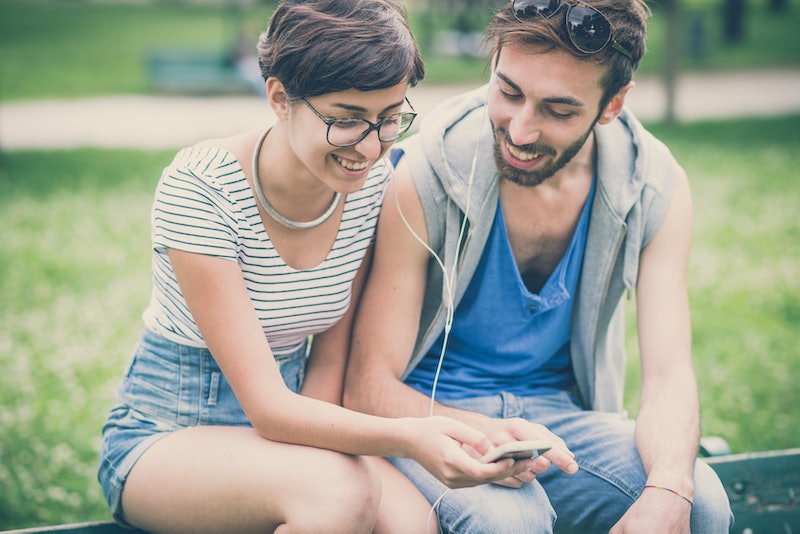 Is there anything worse than the agony of unrequited love? While most of us hoped the elementary-esque days of pining for someone and being unsure of his or her feelings were behind us, adulthood unfortunately seems to have brought on even more dating woes. You'd think growing up would make things less complicated — we're all (seemingly) more mature, so telling someone your ~true feelings~ should be a cinch, right? Wrong. It seems almost impossible at times to decipher what's going on in your crush's head; we're not mind-readers, but it often feels like things would be a whole lot easier if we were. So how can you tell if someone likes you?

You've heard it before, in almost every movie ever made: Someone is best friends with someone else for a long time and all of a sudden, bam! they're dating and happily in love. Though these themes are problematic and completely undervalue the awesomeness that is platonic, supportive friendships, there's still something to be said for this trope. Having a "crush" on someone as an adult sounds silly, but it happens all the time — whether it's your favorite delivery boy or the gorgeous Starbucks barista, real-life crushes can still happen post-middle school, and they can be just as frustrating.

While there's no tried-and-true method for taking a platonic friend or even a total stranger and turning them into bae, it's always nice to have a guide to help you at least sort of know what's going on. Though it obviously varies from person to person, these signs might help you to know if the person you're crushing on is actually into you.

Obviously, most normal humans make eye contact from time to time. But if you're around someone who frequently gives you soul-penetrating stares, there's a high probability they're into you. Eye contact, however basic, is a form of intimacy — just think how much hotter and more romantic sex feels when you and your partner lock eyes instead of just blankly staring at a wall. Taking note of something as simple as the frequency of eye contact can clue you into your crush's feelings; chances are, they won't bother to meet your eye quite so often if they're planning to keep things platonic.

There's a major difference between going in for a kiss (which would mean duh they like you) and simply being prone to frequent arm grazes and high fives. Physically touching someone you like is a thrill, and even if things are just friendly for now, if your crush isn't shy about small, non-romantic displays of "affection," it could be a sign that they're interested in less platonic PDA...eventually.

Not that anyone should have to change to impress someone, but if you're spending time with someone and notice his/her appearance goes from slovenly to slightly more put together, it could be a clue that they are actively seeking to impress you. Like that one time I had a crush on my cargo-shorts-wearing neighbor and then I noticed he started wearing jeans, and we ended up dating for a year and a half (OK, we were like 15, but you get the point). Looking good for your crush is basically a natural instinct, so be on the lookout for subtle appearance changes — especially if they seem to be subconsciously taking wardrobe hints from you.

Oh, how we all wish this weren't true. There's nothing worse than playing "games" like waiting 42 minutes to text someone back because they took 41 minutes — we're adults, after all. While you shouldn't get too wrapped up in the how/where/when of texting (you'll drive yourself crazy, trust me), you can still take it at face value when he or she does text first. If you're on someone's mind, it naturally follows that they should want to say hi, or even just ask how your day is going. As silly as it sounds, showing interest in someone is as easy as saying "How'd your 'Friends' marathon go last night?"

Did you mention last week that your parent's anniversary is coming up, and then *surprise* your crush brings it up later? Don't get too excited, but they might just be interested in you. Maybe they just have an impeccable memory, but there's something to be said for someone who takes the time to store details about something that's irrelevant to them but important to you.

Well, duh. But still, wouldn't it be great if this were the case 100 percent of the time? As an adult, it's insane to me that I still have to look for "clues" that someone is interested in me. I'm not Nancy Drew, and I don't have time to solve a mystery in between my career, my social life, and deciding what tupperware to get at Bed, Bath & Beyond. So for the love of God, if you notice none of these "signs" from your crush and want to take things to the next level, try the old-fashioned (and somehow forgotten) tactic of just asking them if they want to go on a date. Crazy, right? Hopefully not so much.

More like this
Are Quality Time & Gift-Receiving Love Languages Compatible?
By Lexi Inks
The 19 Best Tweets & Memes About Bisexual Awareness Week
By Lexi Inks
Why A Libra & Libra Couple Might Become Codependent
By Kristine Fellizar
30 Clever Ways To Slide Into Your Crush's DMs
By Griffin Wynne, Carolyn Steber and Lexi Inks
Get Even More From Bustle — Sign Up For The Newsletter