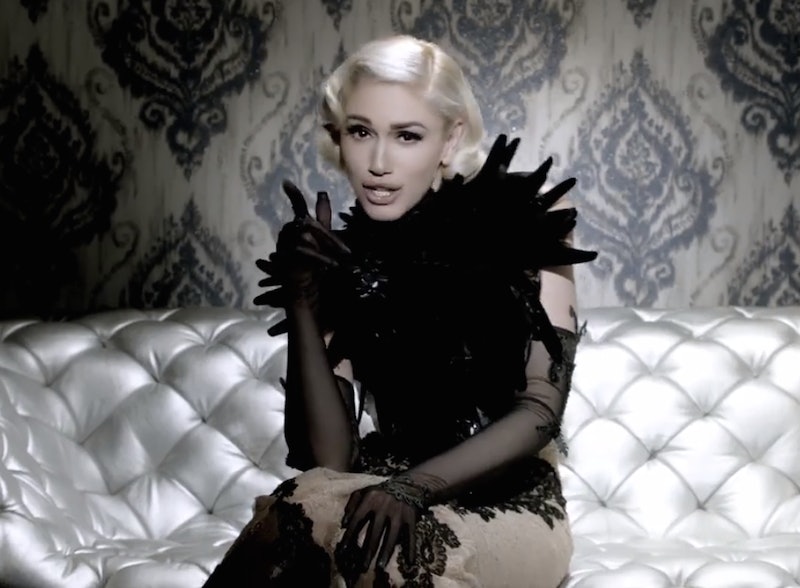 After releasing her latest album, This Is What The Truth Feels Like, on March 18, it seemed as if the Gwen Stefani we've been missing since 2007 was finally back. But, boy, were we sorely wrong. Dspite how amazing her twelve track album and the "Go Ahead And Break My Heart" duet with Blake Shelton may be, it's the Stefani-themed music videos that we have been missing from our lives. And now, with a "Misery" music video teaser strategically released through her personal Twitter account, it's obvious that she's back. In fact, it is now clear that the music video for her first single off the album, "Make Me Like You," was just the beginning. Basically, this new video looks as artistic and personal as possible.

In the merely 15-second long clip, Stefani is seen sporting her bleach-blonde, old-Hollywood-styled locks while wearing a beautiful floor-length black lace gown. From there, fans see multiple dancers breaking it down to her sultry singing. And while this may be no "Hollaback Girl," it certainly pays homage to the gown she wore at the American Music Awards in 2015. Check out the incredible clip for yourself below, and try not to melt into a ball of Stefani-loving goo in the process.

However, it's not just Gwen's impeccable style and catchy beat that make me pumped for the release of this music video on May 31. It's also the emotional artistic turn that it takes towards the end of the clip that draws me in. At that point, fans can spot the singer and The Voice host wearing a giant tutu, red hair-piece, and classical renaissance-styled top while descending in an elevator. And, in that very brief moment, I can almost immediately tell where the message of this song and video is heading: Stefani is reflecting back on her feelings post-split from her ex-husband, Gavin Rossdale, and prior to her official hook-up with Blake Shelton. "Misery" is the personal turmoil-filled story of the romance trauma she's dealt with in the past year. And it already looks gorgeous and so incredibly worth the watch.

Plus, without even seeing the video, the lyrics to the song also seem to allude to this same message. Some of the most notable lyrics include the lines, "I'm doing my best to be sensible. I'm trying not to care, but you're like drugs, you're like drugs to me. I'm so into you." Which, in comparison with her and Blake's "Go Ahead And Break My Heart," seem to clearly reflect her feelings of falling with no control. But, then when you add in the lyrics, "So put me out of my misery," from "Misery," that's when you realize that the ache of her past romance was still weighing down heavily on her at the same time. Essentially, we're about to get real personal with Stefani. And I couldn't be happier about that.