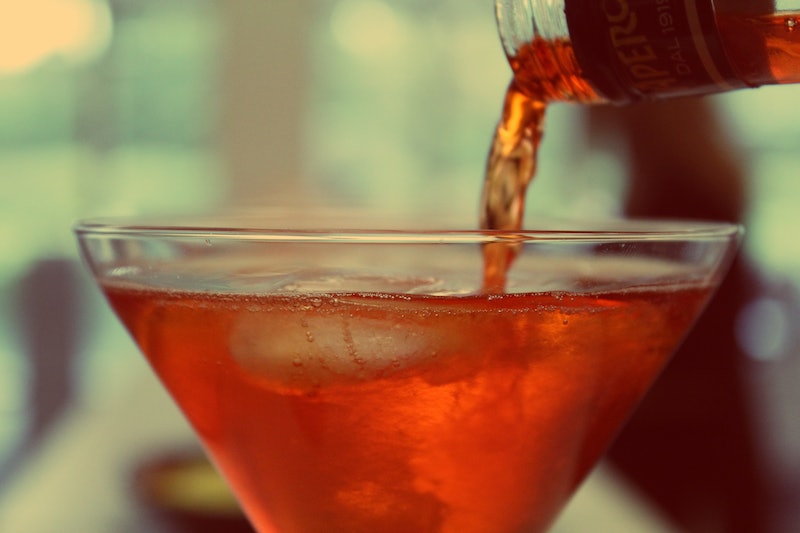 In a study supporting what most women undoubtedly already know, research has shown that spiked drinks aren't a myth, especially for students on college campuses — and moreover, it happens more often than most people may realize. Although anecdotal evidence bounds, astonishingly little research has been conducted on the subject; a new study, however, underlines an incredibly important point: Drink spiking on college campuses is a serious problem, and we need to be taking it a lot more seriously than we hitherto have.

Previously conducted research has painted a questionable portrait of suspected drink spiking. In fact, one of the few papers analyzing the prevalence of nonconsensual drugging concluded in 2009 that most cases are the result of too much alcohol and an overactive imagination. Of "greater concern," according to the authors, was the frequency of drug use and alcohol overconsumption among those studied; a similar 2010 study suggested that spiked drinks were a convenient "crime narrative."

(You can see how this would be problematic, right?)

However, a new paper recently published in the journal Psychology of Violence calls the "myth" of spiked drinks into question. After analyzing more than 6,000 students from three different universities, lead researcher Suzanne C. Swan found that 462 students, or 7.8 percent, said they had been drugged with Rohypnol, Xanax, or an unknown drug without their consent, and 1.4 percent reported knowing someone who had drugged another person or doing so themselves.

"These data indicate that drugging is more than simply an urban legend," Swan said in a press release.

Women were far more likely to report being spiked (79 percent of the victims) compared to men (21 percent), and they also tended to experience more negative outcomes from the drugging. According to the study, 16.8 percent of women said they had "unwanted sex" after being drugged, while 6.4 percent of men reported the same. However, men were more likely to be physically assaulted.

These gender differences extended to how students interpreted being drugged: Overall, men were more likely to report enjoying the experience and say it was "for fun" or by mistake. Swan told Broadly that male students were more likely to drug someone as a prank, such as slipping a friend something on his 21st birthday. "I put happiness in their drinks," wrote one student.

Women, on the other hand, tended to ascribe sexual assault as the primary motive. "Guys do it when a girl tells them she won’t hook up with them," wrote a female student. This isn't to say that men don't experience drugging or sexual assault — one male student wrote that he was drugged because someone was "attempting to take advantage" — or that women didn't drug their friends as a joke, but the survey was clear: Men and women have starkly different views of being roofied.

"It did seem like, for some of the men, they did not see spiking someone's drink as a big deal. For most of the women, it was pretty serious," Swan told Broadly.

The study does have its limitations; many participants reported memory loss after being drugged, and it is possible that they consumed more alcohol than intended. In fact, researchers wrote in the study that many participants weren't even sure they had been drugged, and they had no way to tell for sure unless someone else had seen their drink being spiked. However, the study highlights not only the continuing problem of sexual assault on college campuses, which affects nearly a quarter of female college students, but also the flaws in the way we view consent.

For those who have been drugged themselves, the study is hugely important for the validation it provides in a culture that questions and blames victims for their own assault. For the doubters, on the other hand, here's hoping it will serve as a wake-up call — one that can't come too soon.