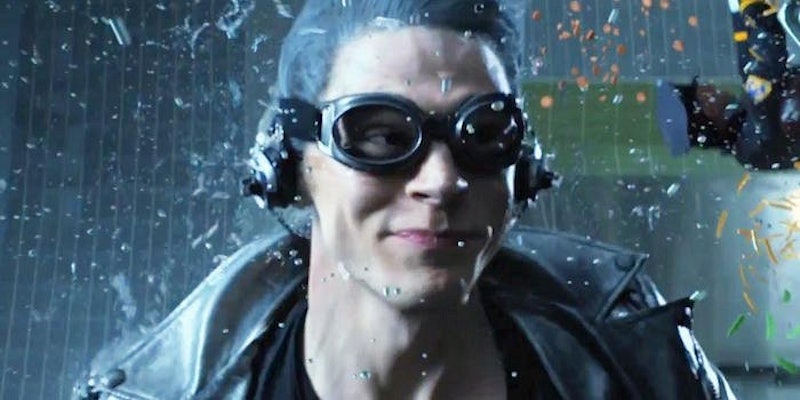 Quicksilver's role in the X-Men franchise keeps increasing with each new movie, and the possibility of a solo project about the mutant feels more possible than ever with X-Men: Apocalypse. In the latest film from 20th Century Fox, Evan Peters plays the role and negotiates his feelings about his father, Magneto, with lightnin' fast speed. It's the second time Peters has taken on the Quicksilver part, but moviegoers are probably also familiar with Quicksilver's other life in the Disney/Marvel project out in the Avengers universe. Aaron Taylor Johnson plays Quicksilver in that version, most recently in Joss Whedon's The Avengers: Age Of Ultron. And while (spoiler alert!) the MCU Quicksilver is dead, could either studio try its hand at a prequel one day, and make a Quicksilver solo movie a reality?

There's no word just yet about a solo project for the hero, but in any event, instead of asking when Quicksilver will get his solo film, wouldn't it be more accurate to first ask which Quicksilver will get his solo film? After all, there are two equally-great versions of the character, produced by different studios. And while any Quicksilver solo project would probably make bank, as of now, terms have it that it must be a Fox-backed project. Back in the '80s and '90s, Marvel began selling rights to their most popular characters in order to bankroll its special effects-filled projects, a move that resulted, in part, with the 20th Century Fox-made X-Men series that began at the turn of the millennium. Obviously, this franchise has panned out well for the studio, as fans are still flocking to theaters for its films 16 years after the original.

The superhero movie boom that rose up along with these films and others like Spider-Man encouraged Marvel to begin buying back their rights to certain characters. For characters that stay put in their own universes —Thor, Spidey, Hawkeye, Iron Man — the translation was pretty easy. But for jet-setting heroes like Quicksilver, who sprints between the X-Men and Avengers universes, the legality got confused — so confused, in fact, that the studios had to make some hard and fast negotiations that affected, and continues to affect, which characters you'll see in either universe.

If that all sounds frustrating, though, it shouldn't; a Quicksilver movie could definitely still happen someday. Though there's no word on anything currently in production, 20th Century Fox has the rights to produce a Quicksilver movie, if it wants to. It might just depend on fan interest — so if you're invested in the character, be sure to express your love and get a Quicksilver movie made ASAP.