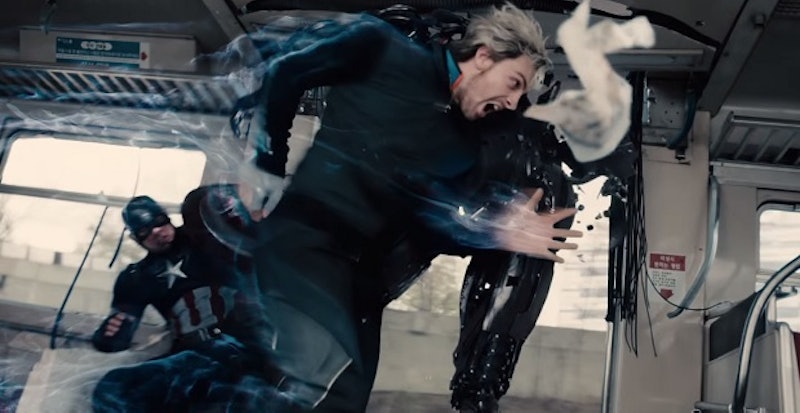 Spoilers for Age of Ultron ahead. How dare you, Disney. How dare you give us Quicksilver, perhaps the coolest new character in Avengers: Age Of Ultron, and then callously kill him off during that same movie? It's cruel and unusual and I demand you reverse this decision immediately. Thankfully, this is the Marvel Cinematic Universe, where practically no character stays dead ever, so there's more than a slight chance we'll be seeing Aaron Taylor-Johnson's portrayal of the speedster again at some point. But just how will Marvel bring Quicksilver back from the dead? They've already laid the groundwork for his resurrection, as it turns out.

(This isn't even a phenomenon strictly relegated to the MCU, either. Other Marvel characters outside the Universe have been brought back to life as well, most notably Patrick Stewart's Professor X, killed in X-Men: The Last Stand and inexplicably resurrected in the post-credits scene of The Wolverine.)

So a precedent has been set — and there's reason to believe it's a precedent that will extend to Quicksilver as well. When asked point-blank by CinemaBlend if his contract with Disney was one-and-done, Taylor-Johnson answered opaquely:

I mean, I thoroughly enjoyed working on [this movie], and would love to do, I would love to being doing more movies with the guys at Marvel. Maybe there will be some case where that might happen. Again, I’m not sure, but...

However, Ultron director Joss Whedon is against the idea of resurrecting Pietro, noting that it would lower the film's stakes, telling Empire:

But it felt very disingenuous for me, especially the second time around, to make what I refer to as "a war movie" and say that there is no price and everybody walks away. In this movie, we’re saying, "Prove to me that you guys are heroes." And he’s the guy that does it.

But remember that Ultron is Whedon's swan song with the MCU. He declined to return to finish the Avengers franchise, with Joe & Anthony Russo (The Winter Soldier) taking over for both Infinity War — Part 1 and Part 2 (which are being shot back-to-back). As such, Whedon doesn't really have any say in whether or not Quicksilver makes a return appearance... a fact he freely admits:

I said to Aaron, "The only way you’ll stay alive is if the Disney executives say, 'Hey idiot, this is a franchise, and we need all these people and you’re not allowed to kill them off!'" We did actually shoot him in the last scene, in an outfit, with his sister. We also shot him, waking up, saying, "Ah, I didn’t really die from these 47 bullet wounds!" Actually, we shot something else with that, but... maybe I’ll let you know about that later.

Iiiiiiiiiinteresting... So they actually did shoot a resurrection scene for Ultron that ended up on the cutting room floor. (Perhaps it was going to be the strangely absent post-credits scene?)

So it seems like all signs are pointing to a surprise return for our favorite Eastern European sprinter. Besides, if Disney had wanted to make his death final, they would have left his corpse on the floating Sokovian city to explode along with the rest of the makeshift meteor. But the last we saw of him, his body was being carted away into S.H.I.E.L.D. custody — and, as we know, they have the ability to bring people back from the dead.

So we have precedent, vague contractual agreements, evidence of a filmed resurrection scene, and an open-ended fate. Sounds like pretty much a done deal that Quicksilver's coming back, right? Now there's just the question of how. If only Age Of Ultron had introduced some magical device that could heal wounds by regrowing skin tissue...

We already know that Pietro's sister Wanda (aka Scarlet Witch) is returning Captain America: Civil War . While that film is probably already too jam-packed with characters and subplots to devote time to Quicksilver's resurrection, I would say it's safe to expect a triumphant return in 2018's Avengers: Infinity War — Part 1.

This time, we can safely say we did see him coming.