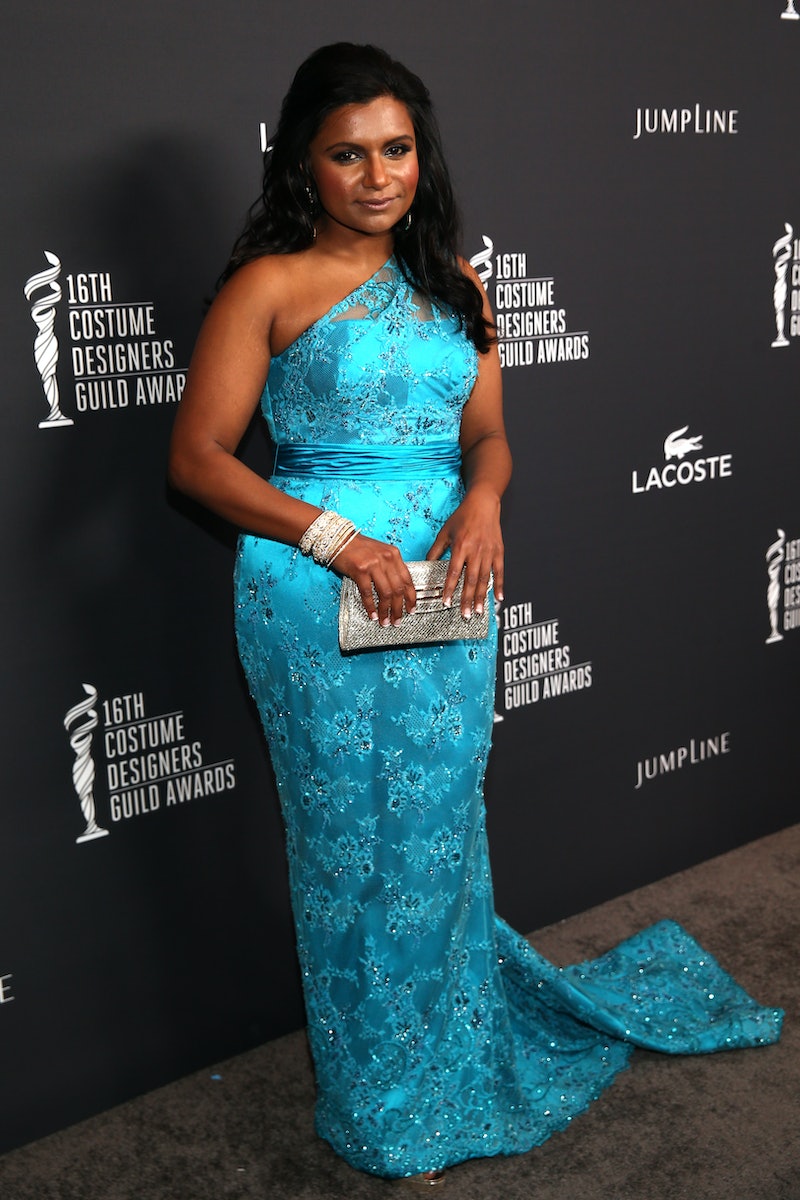 Say what you will about funny lady Mindy Kaling’s many comedic talents, but it’s not very often that we get a chance to praise her aptitude for fashion. It’s not that she never looks amazing on the red carpet, per se, or that she’s not a stylish star whatsoever. Rather, it’s that most of her red carpet gowns are so run-of-the-mill, middle-of-the-road, and sometimes just plain boring that we simply fail to notice them in either a positive or negative way. But that certainly wasn’t the case this weekend, when The Mindy Project star wowed just about everyone with a breathtaking, custom-made, aqua-hued gown at the 2014 Costume Designers Guild Awards.

Designed by Salvador Perez — who also serves as The Mindy Project’s costume designer and president of the Costume Designers Guild — the one-shoulder, strikingly blue gown featured a delicate lace overlay and a strategically placed satin sash to highlight Kaling’s hourglass figure. Everything about this look (from the perfect, curve-hugging fit and the stunning color to the simple, shiny accessories and gorgeous hair and makeup) has us feeling 100 percent certain that this is the comedian’s best red carpet look to date — and by a long shot!

Though she was definitely the best dressed in our book, Kaling wasn’t the only star to show up in blue at this year’s Costume Designers Guild Awards. Amy Adams — who was recognized with the Lacoste Spotlight Award at the ceremony — wore a long-sleeved teal gown from Frocktalk by Kristin Burke, while Olivia Munn was spotted in a low-plunging, bright blue J.Mendel number.

We, for one, are thrilled to see Kaling finally making such a splash on the red carpet, especially following the recent controversy over her ELLE Women in TV cover. After Kaling was the only featured star — others included Amy Poehler, Zooey Deschanel, and Allison Williams — to receive a head shot, many of her fans criticized the magazine’s decision to cover up the curvy star’s full body. (And it isn’t the first time this has happened either, with critics going crazy over Melissa McCarthy’s covered up look on the magazine’s cover in 2013.)

But Kaling, amazing woman that she is, took it in stride, claiming that she loved her “glamorous” and “cool” cover shot and making this joke on Twitter:

It’s Kaling’s ability to make a joke out of just about anything that makes us love her more and more each day. But if the star keeps dressing like she did this weekend, we’re pretty sure we can make room for another reason to be obsessed.

More like this
Sydney Sweeney Just Revived The Iconic ‘90s Cone Bra Trend
By El Hunt
Here Are All 703 Outfits Rachel Wore On Friends
By Kat George
The Best Heels For Bunions, According To A Podiatrist
By Margeaux Baulch Klein and Maria Cassano
Dua Lipa On YSL Beauty, Plus Her Fearless Approach To Hair & Makeup
By Erin Stovall
Get Even More From Bustle — Sign Up For The Newsletter