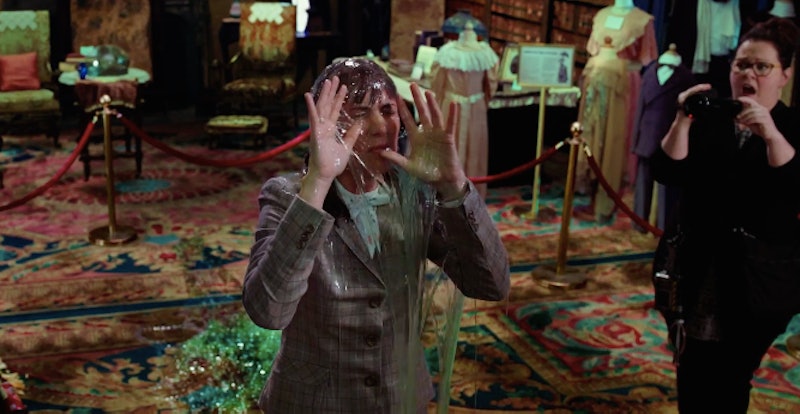 There's been so much unwarranted negative attention on the idea of an all-female Ghostbusters (oooh, so scary) that people aren't asking the important question about the new reboot. Namely, is getting slimed still as gross as it was in the original? Well a new interview in Entertainment Weekly reveals all about what Ghostbuster's slime feels like in real life. Turns out, the new lady Ghostbusters ain't afraid of no ghost (or um, they aren't afraid of ghosts, was never about that double negative) but it seems like they don't appreciate getting slimed.

For one thing, the slime — a delightful corn syrup/glycerine mix in reality, nothing ectoplasmic — is basically a safety hazard. "You can’t move once it’s sprayed because it’s so slippery that [the crew] had to put towels down so you could walk," said Kristen Wiig, according to Entertainement Weekly, who's playing Columbia University professor Erin Gilbert. "But as you try to wash it off, it regenerates. So the more you try to wash it off, the slippier it becomes." That sounds mildly terrifying in itself, but it only gets worse, because that slime? It has the consistency of every gross thing you could ever imagine.

"It’s like that slime stuff they used to sell in a little jar," Leslie Jones, the team's street-smart Subway worker Patty Tolan, remarked. "But it has a viscosity as you touch it, like the hair goop from the ‘80s," chimed in Melissa McCarthy, who's slated to play published author and paranormal expert. Other defining elements? "A little bit of mucus" and a "whisper of vomit" finish up the slime round up. In essence: the worst.

So how much sliming is gonna be going on here? Well, the trailer alone already has Wiig being power vomited on by a skeletal looking specter, full on drenched in the gelatinous goo. We also know that this round of ghosts are spirits on steroids, with one of the problems on the slab being a device that amplifies paranormal activity. My assumption? The whole city is going to be drench in green by the end of the film. And that sounds great, because according to Kate McKinnon, the nuclear engineer of the group, it feels like the fake saliva you can buy to fix dry mouth.

Through it all, we know that the cast has dealt with far grosser things than the onslaught of slime, and there are more frightening challenges ahead. But I'm glad that Ghostbusters is holding on to their great ectoplasmic history, because what would the series be without its fair share of slime? To me, having hilarious women at the front of the series is a very welcome change, but once you take away the slime, you're just messing with tradition. The movie comes out July 15, so brace yourself for impact.