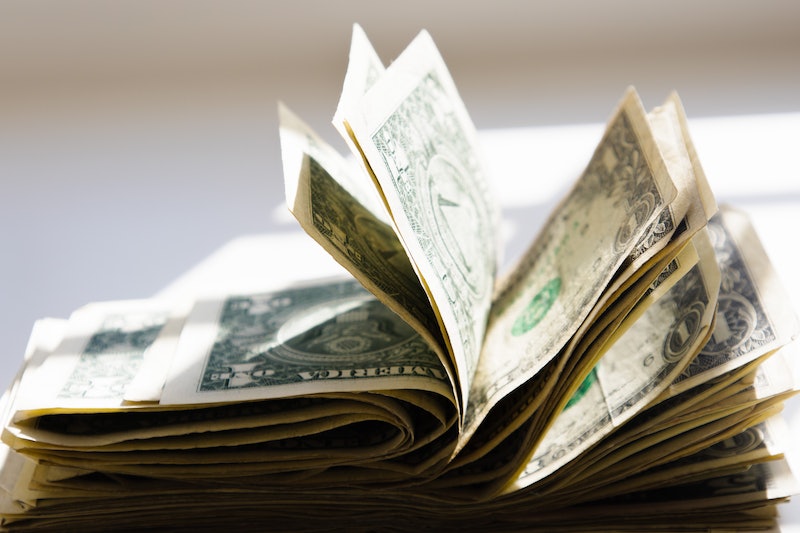 Good news for anyone with dreams of becoming a millionaire: It is actually possible, according to an online "millionaire calculator." The calculator works out how money much you need to save every day in order to become a millionaire — although don't expect it to be a quick process, especially if you're a Millennial. According to stats on UK financial website This Is Money, saving just $20 a day from the age of 27, at an average interest rate of seven percent, will make you a millionaire at the ripe-ish age of just 66 years young! I mean, hey, at least it means you'll have a million socked away by the time you retire, right?

And at first glance, $20 a day sounds pretty manageable, doesn’t it? That saving could be made by cutting out your daily lunch order with something brought from home. In actual fact, a daily $20 equates to an intimidating $600 a month — an amount which, for many of us, isn’t just lying around the house waiting to be scooped up into a savings account. I, for one, need that sum for living (and eating) right now. And as anyone with their eye on savings rates right now will attest, it’s incredibly to gain a seven percent return on anything at the moment )unless you want to take bigger risks with your cash).

As of April 2016, the U.S. national average savings account interest rate is only 0.06 percent for all balances according to the FDIC — meaning that if you started saving the same amount at 27 with this interest rate, it's possible that you could make your great, great-grandkids millionaires, assuming they kept up your savings habits after you died: It would take you a crazy 192 years until you hit that millionaire mark by saving $20 a day. Pardon my while I rattle my piggy bank and cry.

It's also worth noting that the millionaire calculator also doesn't take into account changing inflation rates, which would mean even if you did secure a seven percent interest rate for life, it doesn't reflect how the value of your money will change based on how the economy values wages against the cost of living.

Of course, it might seem way more fun to splash that cash than it is to store your funds in the bank and watch the pennies stack up oh so slowly, but savings are a good thing to have. Indeed, a report last year revealed that most Millennials actually have less than $1000 in savings (so bleak, yet so accurate), which is all the more reason to make an effort to start saving now. If you don’t know where to start, focus on paying off your debts first, or if you can afford it, take a leaf out of Angelina Jolie’s book: She splits her income into thirds, spending, saving and giving to charity in equal measure.

But if you're all for pulling a Drake and prefer living in the moment, there are actually also plenty of times where you can forgo stacking your money and opt to splurge instead: Sometimes spending in the present day will yield you greater returns in the long run, whether it's an experience you'll always remember or whether it's a good deed you're doing for someone else. Just don't forget to plan ahead a little bit for those rainy days, too.

More like this
8 Money Saving Experts To Follow For Accessible Advice
By Maxine Harrison
An Open Letter To The Person Who Bought Steve Jobs’ Birkenstocks For $218,000
By Ginny Hogan
What Is Harry & Meghan's Net Worth? They're Richer Thanks To Their Netflix Doc
By Hugh McIntyre
Is Blake Lively Or Penn Badgley The Richest 'Gossip Girl' Star From The OG Series?
By Hugh McIntyre
Get Even More From Bustle — Sign Up For The Newsletter