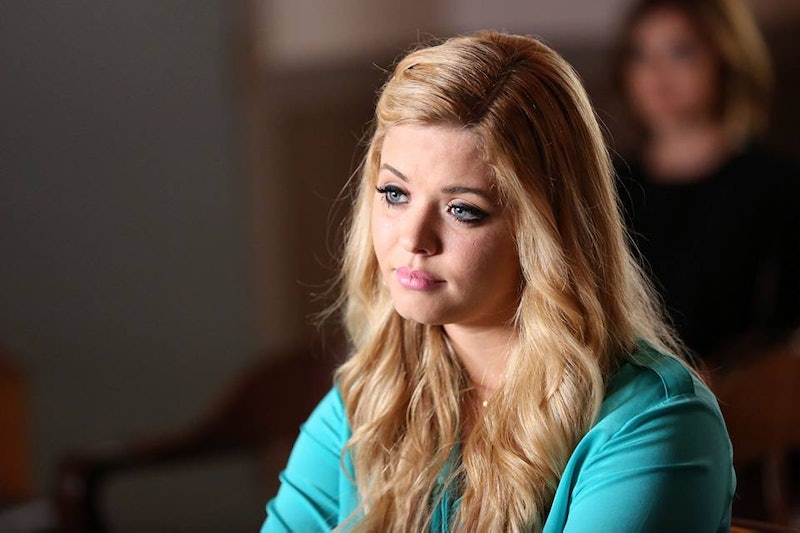 There's nothing that I like more than discovering a new Pretty Little Liars theory, especially one so mind-blowing that, if true, it would totally change everything that we thought to be true on this show. Prior to the reveal that Charlotte was Big A, Pretty Little Liars fans had a million different ideas about who could be wearing the black hoodie. (And, let's be real, most of us thought that the person wearing the hoodie had to be Wren.) Now, Pretty Little Liars fans aren't just on the hunt for the identity of Uber A, but the identity of Charlotte's killer as well. Since it's highly likely that Uber A is not Charlotte's killer, we now have to consider that there's a murderer running around town in addition to A. So who could have killed Charlotte? A new PLL theory from Tumblr account TheMarinaAlexis will make you reconsider everything that Charlotte's sister Ali has been up to this season.

Ali's motives seemed pretty clear when Season 6B picked up. After discovering that Charlotte was murdered, Ali acted exactly how one might expect her to following her sister's death: She mourned, and made it clear that she would find Charlotte's killer, even if the killer was one of her friends. However, as TheMarinaAlexis pointed out, that attitude dropped only mere episodes later — Ali got so wrapped up in her relationship with her now-husband Dr. Rollins that she seemed to forget all about Charlotte.

According to TheMarinaAlexis' theory, Ali may have killed Charlotte in order to bring her friends back under her control. Ali was the leader of their pack, able to manipulate her friends into doing basically whatever she wanted. Then, when she went missing, the Liars did everything in their power to find out what happened to her — she was still controlling them, even from "beyond the grave." When she came back to town, the Liars did everything in their power to protect Ali, and then, later, to find out the identity of "Charles DiLaurentis," who turned out to be Charlotte herself. According to TheMarinaAlexis, the Liars leaving Rosewood and "abandoning" Ali was the catalyst for her to crack — and she started to resent her sister Charlotte for keeping her in Rosewood. Charlotte's murder would keep the Liars in town and entangled in a mystery deeply connected to Ali once again.

So could Ali really be the killer? TheMarinaAlexis may have convinced me. The Tumblr user pointed out one major moment from the Season 6 finale that definitely suggests Ali could be Charlotte's murderer. In the Season 6 finale, Mary Drake and Dr. Rollins pose as Ali's mother and Detective Wilden in order to drive Ali crazy, and it totally works. Ali immediately blames herself for something, but we know that she didn't kill her own mother or Wilden — so why is she so devastated? TheMarinaAlexis has a theory:

When Ali is hiding in the church from what she thinks are the ghosts of her mother and Wilden, she tells Emily, “I knew they wouldn’t follow me here. I deserve it. This is my punishment.” Why does Ali seem so guilty? Are we really supposed to believe that she’s still reeling with remorse over how she treated people back in high school? Based on her continued selfish behavior throughout the time jump, I find that unlikely. Maybe she’s professing so much strange guilt because she’s really Charlotte’s killer.

So could Ali really have killed Charlotte in order to get her friends back? Thanks to TheMarinaAlexis, it seems totally plausible, and the Liars better watch their backs.