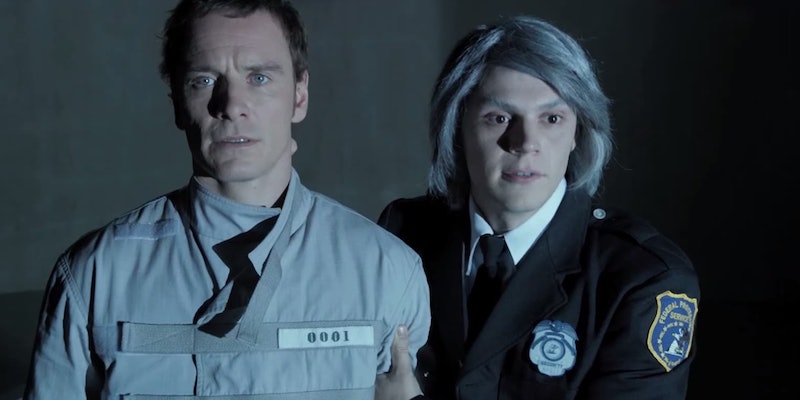 There are a lot of characters in the X-Men movie franchise. X-Men: Apocalypse alone features eight returning characters, four new X-Men recruits, and four new villains. And that's just the main cast. Obviously, there are a lot of colorful personalities in there, but perhaps the most intriguing of all is Magneto. The new film is shedding some light on the past of the enigmatic villain, filling in more of the blanks to show how he went from Michael Fassbender to Ian McKellen. And a couple of those revelations involve some never before acknowledged children, which begs the question: How many kids does Magneto have?

In the film, Magneto has managed to carve out a happy life for himself while in hiding. He has a wife and a young daughter, Nina, but things go south when authorities catch up to him. During their attempt to capture him, the police accidentally kill both Magneto's wife and daughter, which causes him to turn to the dark side again. Later on in the film, it's revealed that Magneto also had another child earlier: Quicksilver. That's right, the speedster learns that at some point in the past, Magneto had an affair with his mother, and he was the result. So by my count, that's two kids for Magneto in the film. However, the Magneto in the comics has been a bit more prolific when it comes to making babies.

Magneto's first child in the comics is actually very similar to his first-revealed child in X-Men: Apocalypse. After World War II, Magneto (who went by Magnus at the time) led a peaceful life in the European countryside with his wife, Magda, and their young daughter, Anya. However, after Magnus's powers are witnessed by the townsfolk, they burn down his house — with Anya inside. This causes Magnus to unleash his powers, and he scares away Magda in the process.

Later, the mutants Scarlet Witch and Quicksilver, who were raised by a gypsy couple, learn that Magneto is their father and Magda was their mother. Magda was apparently pregnant with the twins when she fled Magneto, and then died giving birth to them (Magda is one tragic character). The mutant heroes have a tumultuous relationship with their father, until 2015 when Marvel retconned their story to make them not Magneto's kids after all. Not only that, but they also changed their histories so that Quicksilver and Scarlet Witch aren't even mutants — which they had been since their introduction in 1964. This controversial move by Marvel was seen by many fans as a way to make the comic book characters better line up with the versions introduced in Avengers: Age of Ultron , who are not mutants and who have nothing to do with the Fox-owned Magneto.

But Magneto still has one other kid out there in the Marvel Universe. The hero Polaris, who shares the same mutant power as Magneto and who is a longtime member of both the X-Men and X-Factor, is also his daughter. Magneto had an affair with her mother, who died along with Polaris's stepfather in a plane crash. While it was always assumed within the Marvel Universe that Magneto was Polaris's father, it wasn't proven in the comics until 2003.

So if you're looking at the bulk of Magneto's published history, he has four children. But in terms of current Marvel continuity and their tendency to minimize mutants, he's down to two. In other words, it looks like the movie got this one right on the money!