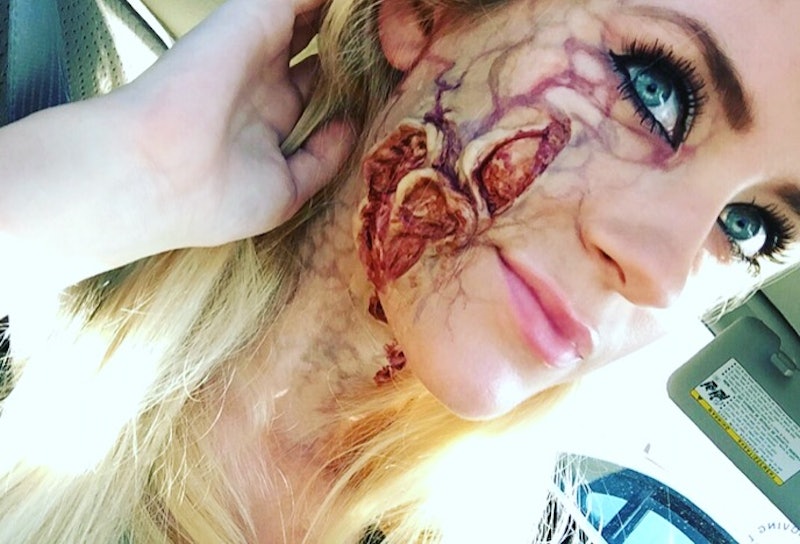 You may not recognize his name, but Mark Coulier is a man who has had a hand in some of the most popular films of the last twenty years. He's the Oscar-winning makeup artist who transformed Ralph Fiennes into Voldemort in the Harry Potter films, created the X-Men's iconic looks, made Tilda Swinton look decades older in The Grand Budapest Hotel , and gave Meryl Streep her iconic Irony Lady look. And a few days ago, he turned me into a zombie.

Thanks to a prosthetic piece of skin about six inches in length, different colored paints, fake blood, and the steady hand of a true artist, I became a half dead creature in just 45 minutes. But Coulier has had plenty of practice transforming the living into the living dead. For Pride and Prejudice and Zombies, the Jane-Austen-Meets-Undead dark comedy, Coulier converted dozens of British actors head shot-worthy faces into decomposing flesh. "The interesting thing for me was pairing rotten faces with period costumes and hairstyles," he says. "We had this girl in a turn-of-the-century bonnet, and a lovely little dress, but she had half of her face hanging off."

And while the process of mutilating my face seemed to be second nature to the Oscar-winner, (he expertly rips small holes in the piece of fake flesh he's glued to my face to give it dimension) he assures me that working with prosthetics is a constant struggle. "The thing about about prosthetics is, you stick them on, and they're so delicate, you can make a mess of things. It's quite stressful," he says. "Once you've stuck the makeup on, you've then got to maintain it for the next 12 hours and have it looking as good as you did when you first did it, which is really tough. Although I really enjoy when I get it on set and there's a good reaction to it, it's a love/hate relationship."

And this often tumultuous relationship with his work makes sense. The amount of detail he puts into every face is astonishing — if my "quick" 45 minute makeup is any indication — and having it destroyed in a matter of seconds on set over and over again would be exhausting.

Coulier tells me to close my eyes as he flicks multicolored paint flecks around my cheeks, and explains that all of the various colors he's adding to my skin are real pigments found in actual rotting flesh. It's impressive, if not disgusting, that this level of realism is considered when crafting something as unreal as zombies. But this is his life's work after all, and the man knows what he's doing.

Coulier has been working on film sets for nearly 30 years, and more has changed over the past three decades than just the type of face paint he uses on his clients. "The timeline is shorter. We don't get as long to do something as we used to," he says. "And the money has changed. We are getting less for makeup now then I was getting 20 years ago. There are a lot more people around doing it. Twenty years ago there were a lot less people; it was a specialized skill. But these days productions are trying to make their movies cheaper, and cheaper, and cheaper. So consequently, you end up with less money."

I suggest that perhaps advancements in special effects have also contributed to this unfortunate decrease in pay, and Coulier confirms the theory. "There's a tendency for the budget to go to the special effects department, and prosthetics are a bit of an afterthought. Something will have a 10 million dollar visual effects budget, and a 50 pound — that's about 70 dollars — prosthetic budget," the British makeup artist jokes.

Nevertheless, Coulier soliders on with a grateful smile on his face. "I've won a couple of Oscars, I've worked on a Star Wars movie, I've done a big zombie movie," he says. So what's left on his make-up bucket list? "Stephen Spielberg," he 51-year-old says. "It's on that list of jobs you want to do in your life." Luckily, working on Spielberg's film, Ready Player One, happens to be his next project.

When my face is complete, Coulier asks if I'd like to leave with the makeup on. "Oh yeah," I tell him. "I'm meeting my dad for dinner. He's a doctor." The idea that a physician would soon inspect his work thrills Coulier, and he proceeds to give me his phone number, making me promise to text him my father's reaction.

And I do. My dad is at first (and understandably) horrified, but soon realizes my face is just some exceptionally convincing makeup. I text Coulier the below photo and my dad's reaction: "My dad says, 'I'll need a #3 needle, suture, and disinfectant, Stat!"

Coulier's response? "Haha, excellent! Tell him I'm sorry I did that to his daughter."

Despite the decrease in pay, the long hours, and the constant stress, it seems that Coulier still enjoys the artistry of his work — even when it involves turning otherwise healthy faces into decaying and bloody mounds of flesh.

Watch my transformation in a time lapse below.

And check out this exclusive behind-the-scenes video from Pride and Prejudice and Zombies, which comes out on DVD and Blu-ray May 31.