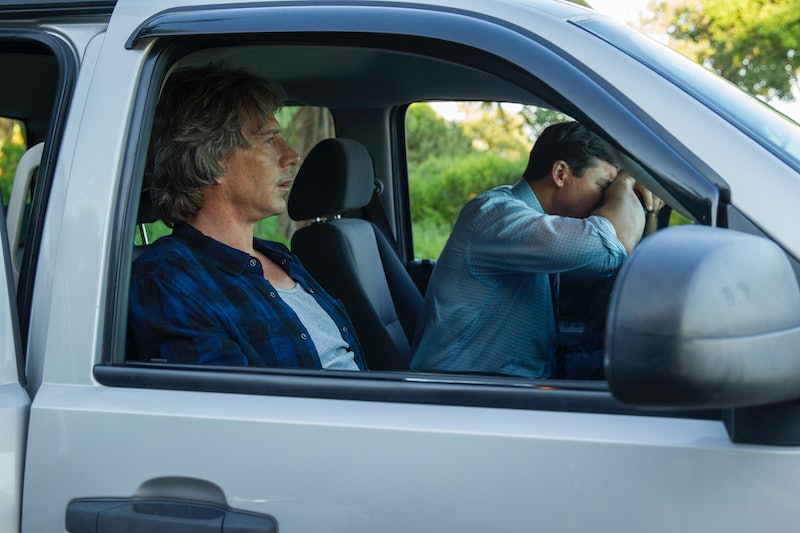 There's no shortage of dysfunctional families on TV, but the Rayburn clan on Netflix's drama Bloodline has so many secrets that it's hard to keep track of them all — especially since the show's freshman season premiered over a year ago. Although the family's eldest son met a grim fate last season, the series' nonlinear narrative style means that he's back as a regular for Season 2. But, what happened to Danny Rayburn in Bloodline Season 1? The circumstances of his life and death are complicated, so let's refresh our memories before we spend Memorial Day weekend marathoning Season 2.

It's established in the premiere that Danny is deeply troubled and spends long periods of time estranged from his family — much to the distress of his mother, Sally. He returns home to the Florida Keys to attend a dedication ceremony of a pier that will be named after his parents. Danny stays in town to work for the family business and briefly tries to make amends, but that doesn't last long. He reconnects with an old friend to participate in a dangerous and deadly drug smuggling ring and engages in heavy drug use, which makes his behavior erratic and frightening. Over the course of the season, we see Danny mail checks to an undisclosed address — by the finale, it seems likely that the money was sent to his secret teenage son, Nolan, and Nolan's mother (both of whom will be regulars in Season 2).

Flashback sequences to Danny's childhood shed light on why he grew up to be such a troubled adult. When he was a teenager, Sally was prepared to leave her husband for good and wanted their 10-year-old daughter, Sarah, out of the house when she departed. At Sally's request, Danny took Sarah out on the family's boat (despite his brother John's repeated warnings that she shouldn't be out there without an adult). When Sarah's beloved seahorse necklace fell into the water, she dove in after it and tragically drowned. Danny's father never forgave him for Sarah's death and abused him so severely that the physical injuries persisted into his adulthood.

As Danny's illegal activities and drug use escalate, it becomes clear that he's a danger to the family on multiple levels. His siblings are understandably furious when they learn that he's used the family hotel as a space to stash drugs. In one of the most disturbing scenes of the season, Danny brazenly disrespects John's request that he stay away from his children. He takes John's daughter, Jane, boating and gives her a seriously creepy gift — the seahorse necklace that belonged to Sarah. At this point, John becomes so fearful for his family's safety that he asks his wife to take their children out of town until he can figure out what to do about Danny. He views the seahorse necklace as a direct threat and it marks his breaking point.

In Season 1's penultimate episode, John and Danny come to blows for the last time. The family's youngest brother, Kevin, gives John a gun before he goes to confront Danny — but John ends up drowning him with his bare hands instead. Immediately after the murder, John is hospitalized for an attack of hypertension, which leaves his two younger siblings to cover up the crime. Meg hides the body in the trunk of her car until John can dispose of it — but, before he does so, he inflicts post-mortem injuries on the body to make it look like the murder was related to Danny's involvement in drug smuggling. The siblings also destroy the interior of their brother's apartment in another effort to make the murder appear drug-related.

Danny's body is eventually discovered by fisherman and Detective Lenny Potts immediately suspects that John, Meg, and Kevin are involved. As Season 1 comes to a close, he tells Sally that her children are lying to her. Danny may be dead, but his story is far from over and will still be at the center of Bloodline in Season 2.

More like this
12 Documentaries & Films About Cults From Netflix UK To Hook You From Start To Finish
By Kay Leong
Is Ryan J. Vallee From Web of Make Believe Still In Prison?
By Kadin Burnett
This Netflix Doc Shows How An IRS Scammer Uncovered Secret Spy Technology
By Gretchen Smail
How A Political Staffer’s Death Became The Center Of Alt-Right Conspiracy Theories
By Gretchen Smail
Get Even More From Bustle — Sign Up For The Newsletter