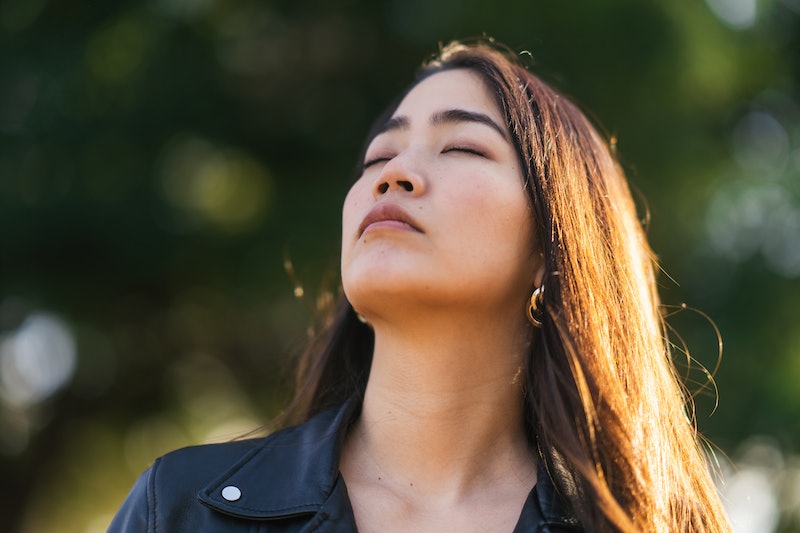 Have you noticed your breathing lately? I apologize if that's now distracted you for the remainder of the afternoon, but it's not necessarily a bad thing; thinking about your breath is a big part of meditation practices. It's also a good idea to know your own normal respiratory rate in case something goes awry, or to pick up on any breathing patterns that seem unusual to you. The simple act of bringing oxygen into the body and expelling CO2 out can get off-track in a variety of interesting ways, from the benign to the more problematic, and it's a good idea to know what's worrying and what isn't.

The normal breathing rate for healthy adult humans, according to the Cleveland Clinic, is 12 to 20 breaths per minute; if you're going under or over that for no obvious reason, whether in one instance or chronically, there's an issue that needs to be medically investigated. We breathe differently when we're exerting ourselves physically — encountering high altitudes, experiencing temperature extremes or trying to blow out a candle, for instance — but that's all seen as regular breathing irregularity. What we're talking about here are the more inexplicable breathing difficulties, and depending on the type, they can be linked to anything from asthma to panic disorders and things as charming as fluid around the lungs.

This doesn't mean you should start neurotically checking your breathing rate per minute every time you have a spare chance. That will make you spectacularly boring on dates. But knowing the breathing issues that may indicate health problems may save you in the future, so keep these four in mind.

1. Repeated Difficulty Breathing Through The Nose

If you seem to keep developing serious problems breathing through your nose, the medical answer isn't something living up there; it's possibly a recurrent case of acute sinusitis. It can be mistaken for a normal cold or for flu, because it tends to crop up in winter seasons and be associated with the development of colds. Sinusitis, however, is the filling of the empty sinuses behind the nose with mucus, and can keep coming back in seriously annoying fashion year after year. Decongestants are likely to help you out.

The other common problem that can cause issues with breathing through nose is a deviated septum, which sounds terrifying but isn't. It's most often caused by a blow to the nose (rugby and ice hockey players tend to have chronic problems with their septum alignment) or by genetics, but it essentially means that the septum, or cartilage in the center of the nose, is arranged so that the nostrils aren't perfectly even. That can cause breathing difficulties through one nostril in particular. It'll need straightening with surgery if it's creating serious issues.

If you suddenly find yourself short of breath, particularly if there's no obvious reason for it (you haven't just run 14 miles, for instance, or gone through a massive change in altitude), you need to get to a hospital immediately, because what you're experiencing is classified as a medical emergency. The sooner you get yourself into care, the better, because sudden-onset shortness of breath can be linked to a lot of different conditions, and sorting out your specific symptoms needs to be done fast.

Breathlessness out of nowhere is commonly an asthmatic attack, where the lining of the airways start to become irritated and impede the passage of breath in and out of the body, but it can also be related to serious heart conditions, lung difficulties, anaemia, or diabetes. The list of possible conditions is pretty long, but they'll all likely come with their own attendant symptoms to help with diagnosis.

If you've been struggling in various ways to breathe for years, it's not something to be ignored. Your first order of the day is to stop smoking, if that's a habit: emphysema, a progressive chronic condition of the lungs in which their tissue is increasingly damaged and they become less functional, is definitely linked to tobacco smoking, though it can be caused by other factors.

Once you've done that, you need to go in for a health assessment, because long-term chronic breathing issues can point to progressive conditions that require treatment. Asthma is one, but continual respiratory infections like pneumonia are another, and more hidden options are also on the table: heart disease, partial lung collapse, or failure and various kinds of effusion, where fluid compresses either the heart or the lungs and prevents their expansion, are also possible causes, as are cancers. The heart and lungs will likely be the first port of call for diagnosticians if they can't find an immediate cause, because the proper flow of oxygen and breath in the body is mostly centered on those two organs.

If your shortness of breath comes in a particular form, with rapid, very shallow breathing, it's likely it might be a sign of a panic attack. Even if you've never experienced one before or nothing "panicking" has happened, this still holds true: panic attacks have been known to happen in completely relaxed circumstances, even while people are asleep. Panic-related shallow breathing is related to the brain's anxiety triggers, which demand a higher intake of oxygen to cope with the sudden need to flee from or fight a threat.

This isn't the same as hyperventilation, which is what happens when you breathe too deeply too fast. Hyperventilation may occur as a result of rapid shallow breathing, as your brain will panic that it's not getting sufficient oxygen and shift into the hyperventilating pattern instead. This panicking pattern may also be accompanied by a racing heart, sweating, nausea, tingling, feelings of dissociation, and intense fear, though they can appear in a variety of ways without necessarily including all of these symptoms.

If you are experiencing panic attacks, you are not crazy, but you do need some help. The National Institute of Mental Health recommends that your first port of call should be your regular GP, who can then prescribe a variety of treatments, from medication to talking therapy, specifically cognitive behavioral therapy, to attempt to address your underlying panic disorder. And it's a good idea to check up on techniques to help lessen the impact of attacks if they happen again, like relaxation practices and breathing exercises.