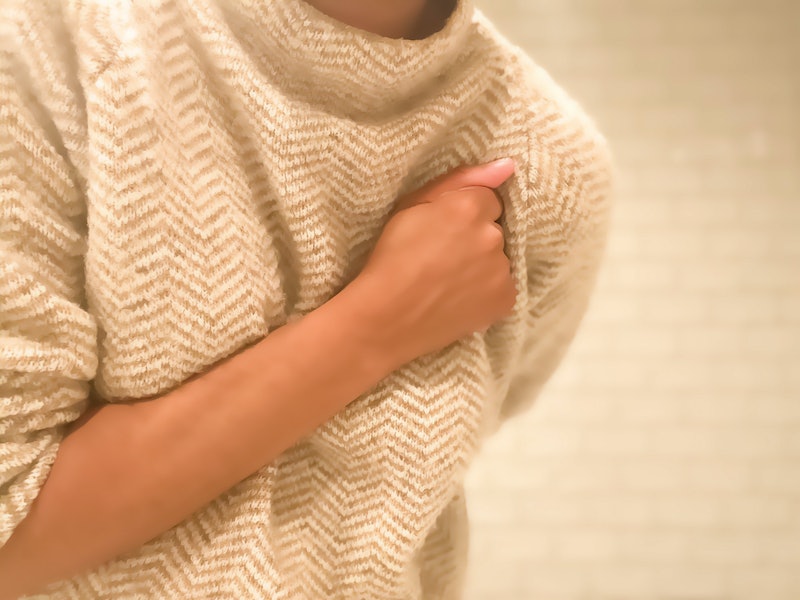 Panic attacks aren't inherently dangerous — but if you've ever had a panic attack, then you know how dangerous they can feel. After all, the symptoms of a panic attack — racing heart, sudden feelings of weakness, terror, dizziness, tingling hands, chills, chest pains, and/or difficulty breathing — aren't unlike the symptoms of a heart attack. Moreover, although panic attacks typically don't last very long, I can tell you from experience that they're both mentally and physically exhausting, so learning how to deal with a panic attack before it really hits is super important.

If you're one of the six million American adults who suffer from panic disorder, then you might already have your own methods for stopping panic attacks before they really start. That said, whether you're fortunate enough to have never suffered from a panic attack but know someone who grapples with panic disorder, or you suffer from them regularly, it's definitely worth your time to learn how to cope with them. Panic attacks are miserable, debilitating, and terrifying. Plus, the more frequently you have panic attacks, the likelier you are to suffer from them on a regular basis.

If panic attacks have become a part of your life, the first and most important thing to do is seek out professional help. A psychiatrist, therapist, or even your GP can help you develop an individualized plan to cope. Nothing I or any other person on the internet can tell you is any substitute for care from a physician (and this article is absolutely not a substitute for actual medical advice), so please, talk to a doctor that you trust. In addition to whatever techniques you and your doctor develop as part of your treatment plan, here's a few things to remember when you can feel a panic attack coming on.

Trust me, I completely understand how threatening panic attacks can seem. We've already established how scary panic attack symptoms are, so it's not surprising that severe panic attacks can cause sufferers to believe that they're literally dying or just straight up losing their minds.

This is why one of the first things you should do when you feel a panic attack approaching is remind yourself that panic attacks can't actually hurt you. Of course, this is easier said than done because panic attacks set off your brain's "fight or flight" response and cause chest pains — both things that can make it very hard to believe that you're not actually in danger.

That said, in my experience, it can be helpful to try to remember that this response isn't triggered by actual danger. In fact, in the brains of anxious people, this alarm is usually a false one. As Psychology Today explained back in 2011, "Panic attacks feel dangerous because they engage our brain's emergency system which tells us we are in imminent danger. But like a fire alarm placed to close to a toaster, the emergency systems in the brains of people with panic attacks are issuing false alarms."

2. Slow Down Your Breathing

As you probably already know, anxiety and breathing are directly related. What you might not know is that slow breathing — but not necessarily deep breathing — is considered by many to be the best way to stave off panic attacks. According to LiveScience, trying to force deep breathing can actually make anxiety worse, because it may cause sufferers to start hyperventilating. Fast breathing and awkward breathing can cause this as well, CalmClinic reports. So the next time you start to feel a panic attack coming on, CalmClinic suggests trying to slow down your breathing. I know it's easier said than done, but it is possible, and it should help you keep your panic under control.

3. Consider Doing Some Cardio Or Yoga

Personally, nothing keeps me from freaking out super hard like a cardio session at the gym or going for a long walk somewhere scenic. Exercise reduces stress and fatigue while simultaneously releasing happy chemicals, like endorphins, into the body. It's important to exercise when you're not feeling panic-y, as well, however. As ScienceNordic reported back in 2013, even three workouts a week can significantly curb panic disorder symptoms.

But exercising right as we feel a panic attack coming on is not the right strategy for all of us. In fact, although it's rare, some people who suffer from frequent panic attacks have reported that physical exercise can actually feel like a panic attack. If that's the case for you, then instead of hitting the gym or going for a walk when you feel a panic attack approaching, you might want to stop, drop, and yoga. Consult with your doctor to see what strategy might work best for you.

But the benefits of regular exercise (not just when you're panicking) are real for people who suffer from panic attacks. So if they are a frequent thing for you, consider developing an exercise regimen that you'll enjoy enough to stick to. It may be hard at first, but it could really make a difference in your mental health. It definitely makes a difference in mine.

The very first thing I do when I can feel my anxiety developing into a panic attack is strip down and jump in a hot shower. This may not work for you, because everyone's different (and, again, your own squad of medical professionals can help you make the best call when developing your first line of response). In my personal experience, though, hot showers can be very effective at reducing panic attack symptoms. The heat mixed with the steady stream of water is naturally calming, and on top of that, the physical sensations of showering can really help you get out of your own head.

I normally hate talking on the phone, but when taking a hot shower doesn't ease my anxiety, my go-to move for halting panic is to call a friend or family member. Whether I melt down over the phone, or say almost nothing and just listen to them talk about their day for 15 minutes instead, calling a loved one always helps me feel more grounded. If you haven't tried this yet yourself, I would definitely recommend it.

Calling someone can help you feel less alone, which can help you manage the fear you're dealing with. Plus, listening to your loved one's thoughts, worries, and triumphs for awhile instead of dwelling on your own can be a mutually supportive way to adjust your perspective — and, in my experience, adjusting your perspective is one of the most crucial things you can do in this situation.

More like this
18 Hinge Prompt Answers To Try If You’re Looking For Something Casual
By Lexi Inks
Why Being “Too Sensitive” In Relationships Is A Good Thing
By Lexi Inks
5 Signs You Have A Toxic Relationship With Yourself
By Lexi Inks
An Expert Weighs In On The Viral Raw Carrot Salad Trend
By Alexis Morillo
Get Even More From Bustle — Sign Up For The Newsletter
From hair trends to relationship advice, our daily newsletter has everything you need to sound like a person who’s on TikTok, even if you aren’t.