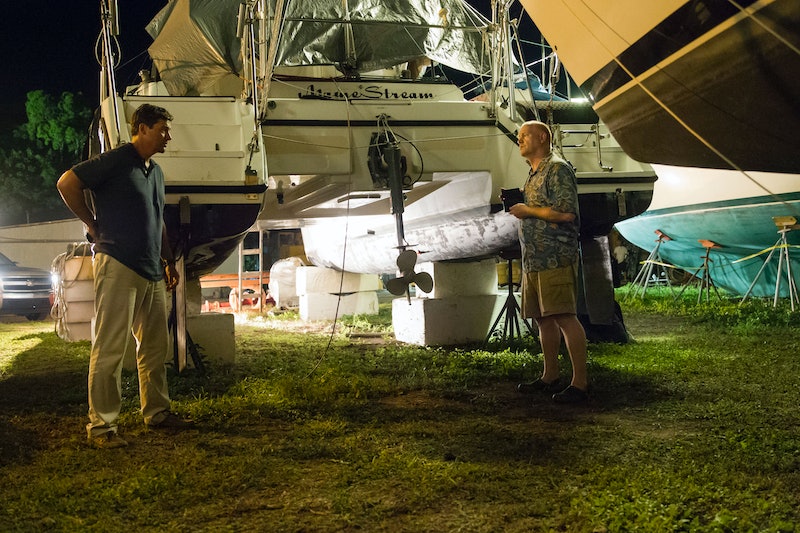 The second season of the Florida-set family drama Bloodline docked on Netflix this Friday. Season 1 ended with the death of Danny (Ben Mendelsohn), the Rayburn family's black sheep and by far the best character on the show. The good news is that Bloodline's non-linear structure means that Danny will continue to haunt the series and his siblings in flashback. Once in the employ of a man named Wayne Lowry (Glenn Morshower) , Danny lost his life because he threatened the Rayburn legacy and the town itself. The first 13 episodes were a parade of family secrets, but Danny's murder and its cover-up take the cake. And thanks primarily to fact that his siblings framed Wayne Lowry, Bloodline Season 2 will feel the reverberations of Danny's death.

The Rayburns are the main show on Bloodline, and there's enough dysfunction there to fuel a 10-season run. But the Keys are populated by some other interesting and shady folks, who pop in and out of the story. Wayne Lowry is drug dealer, trafficker, and all around scary guy to those in the know. To the unassuming public, he's a bait shop owner. Anyway, when Danny returns home for the big family to-do at their famously welcoming hotel, his younger brother John (Kyle Chandler) fears that his wild card older brother will get into something that will rain hell down on the Rayburns. Danny gets into business with Lowry, which is Code Red: the worst case scenario.

Danny gets the "job" through his old buddy Eric (Jamie McShane), a certified "bad influence" from Danny's younger days. Nothing good can come of their reconnecting, John knows. Eric is vaguely up front with Danny about the kind of people he'd be working for if he takes on this gig, but the work is simple and the money is amazing. Eric and Danny steal several gallons of gasoline and deliver it to a drop point in the mangroves, implicating all of the Rayburns by using the family boat. If only the end point of this crime were Wayne Lowry looking to save some money on fuel.

Instead, the theft is connected to a case John (a detective) is investigating. The charred bodies of several immigrant women have been found in the water. Lowry takes money to smuggle these women into the country, but if the Coast Guard gets wise, all evidence is destroyed and the immigrants are burned alive.

Danny begins to take on more responsibility in Lowry's organization. He hides drugs for the man on the Rayburn property. John finds out, but he and siblings Kevin and Meg can't do anything about it without souring their family legacy and closing down the hotel. After John drowns Danny during their struggle in some shallow water, the remaining Rayburn kids know just the crime lord to pin it on. They dress Danny's corpse in the seersucker suit his mother wanted him to wear for the pier dedication (yikes) and plant Lowry's drugs in Danny's apartment. John puts Danny's body on the boat and then blows up the whole thing. Boom: motive and M.O. established. Lowry found out Danny was stealing from him and had him murdered on the way to the social event of the season.

Lowry has his own problems to deal with besides the possible murder charge. The DEA is hot on his trail. But the Bloodline Season 2 trailer shows that the Keys kingpin might already know what John did and how the Rayburns tried to hang it on him. He approaches an understandably wary John and says, "You're gonna do something for me." Then he presses play on a recording of Danny, essentially speaking to John from beyond the grave. "Hey, John," Danny says. "I'd like you to meet my friend."

Will John and his partner Marco be able to help the DEA bring Lowry down? Or will John's work be compromised by his own secrets? If Lowry has proof that John killed Danny, then John may be forced to help him. You didn't think Danny's death would make John Rayburn's life easier in Bloodline Season 2, did you?