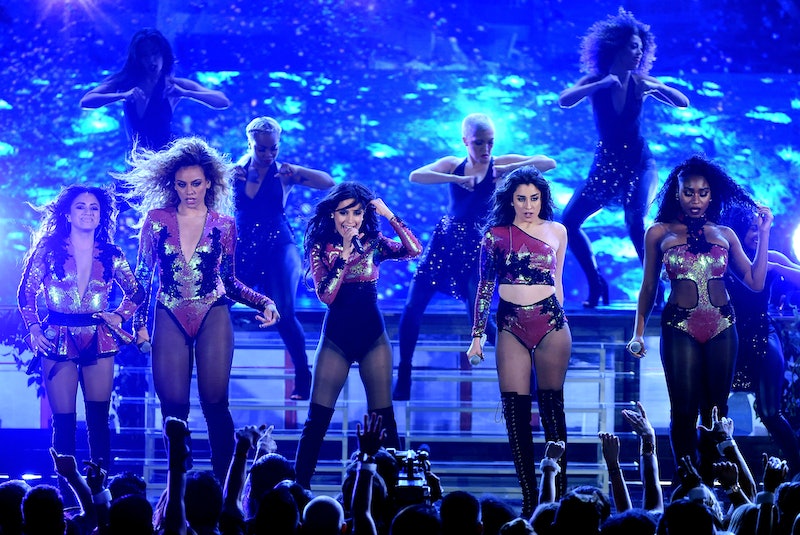 After a painful weeklong delay, Fifth Harmony dropped 7/27 on Friday, blessing us with their empowering girl gang stylings. There have been a lot of expectations when it comes to this sophomore effort... would the ladies prove themselves that their not just an X-Factor-assembled one-album wonder? The answer is a hard "Mhm": they pack a feminist punch as early as the first track, and, if nothing else, you need to give "That's My Girl" a listen because it's filled with all sort of "yaaaas kween slay" lines (um, not literally).

The ladies launch into the first lyrics asking a fitting question as we turn on Memorial Day weekend: "Who's been working some damn hard?" Girl, all of us. Then they pat our metaphorical heads for all the physical and mental stress we're putting ourselves through.

You got that head on overload?Got yourself this flawless bodyAching now from head to toe

From the get-go you feel recognized for all the hard work you put into this last week. Maybe it was tackling a tricky assignment at your job, maybe it was cooking a dinner that wasn't just macaroni and cheese (or maybe you just didn't burn the macaroni and cheese, I don't know your level of culinary prowess). The point is, 5H is proud of you, and you should be proud of yourself, too.

Sometimes when you're thrown into a soul-crushing situation it's really difficult to be proud of yourself. Hell, sometimes you burn that macaroni and cheese and you just want to give up. Well, if things aren't going your way, the girls have some inspirational lines for that, too:

You've been down beforeYou've been hurt beforeYou got up beforeYou'll be good to go, good to goDestiny said it, you got to get up and get itGet mad independent and don't you ever forget it

Fifth Harmony definitely has your back, but they want you to summon your inner strength and take on the world. They believe you're capable of it, and this is reinforced be the chant of "That's my girl." They don't stop there, though, they want to make sure that you don't get undermined by the stupidity of any man with their next verse:

It's just a sick reminder of your last prolonged Tinder experience, the one that felt very successful until, well, it wasn't. We've all been there. But it's ok, because a barrage of support is about to hit:

In taking on a respective line of encouragement each, it feels like you're surrounded by a group of your most loving friends after a heinous break-up. Who wouldn't be able to take on the world after that?

The entire album is filled to the brim with Fifth Harmony's poppy empowerment, but if you only have time for one song before you slip back into the work grind, let it be "That's My Girl." By the end of it all, you'll definitely want to give the gang a five high (which I think is how the cool kids are saying "high five" these days.)