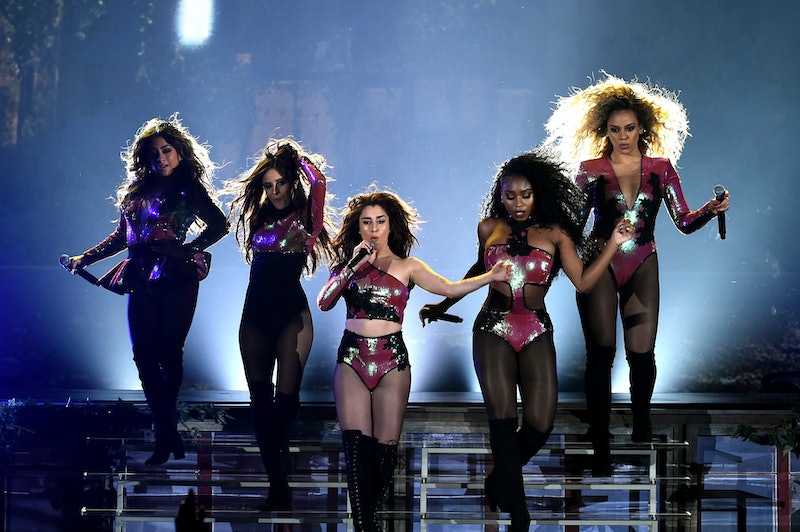 The day Fifth Harmony fans have been waiting for is here — the all-girl group released their second album 7/27 on Friday, May 27. Although the album's release had been delayed by a week to make for a better connection to the title, the lyrics from 7/27 prove it was worth the extra wait. With the already-released singles of "All in My Head (Flex)," "Write on Me," and "Work from Home" — which became Fifth Harmony's first Billboard number one song and the first time an all-girl group has held that spot since the Pussycat Dolls in 2006 — Harmonizers haven't been surprised at all that 7/27 has been living up to its expectations.

Like One Direction before them, Fifth Harmony members Ally Brooke, Camila Cabello, Dinah Jane, Lauren Jauregui, and Normani Kordei joined musical powers when they were placed together by the judges on The X Factor USA . The title of the new album is a reference to that notable day — July 27, 2012 — when these five female vocalists became a pop force to be reckoned with. And the lyrics on 7/27 echo that sentiment that these women are indeed a force of female empowerment with messages showing they are strong, supportive, sexual, and confident people.

As you groove to the new album by Fifth Harmony, make sure you pick up on these most empowering lyrics from 7/27 in honor of this all-group girl tearing up the music scene.

What's a better way to start off an album than with a song that supports and helps elevate your female friend going through a rough time?

2. Destiny said it, you got to get up and get it/Get mad independent and don't you ever forget it — "That's My Girl"

Fifth Harmony gives a shout-out to a song by another all-girl group — "Independent Women Part 1" by Destiny's Child. Whenever you reference Beyoncé, you pretty much get automatic female empowerment credit.

3. Tell me the truth, I like the danger/Cause in the end you will be mine — "Write on Me"

"Cause in the end you will be mine" might sound slightly menacing when written down, but this lyric shows an admirable level of confidence.

Part of being an empowered female is not only accepting your own sexuality, but also empowering the partner you're with, which Fifth Harmony does in this sexy song with Fetty Wap.

5. I don't know why you always think that I/Always think I'm unsatisfied/That I'm tempted by kings with the finest of things/But you know that ain't got no truth — "Gonna Get Better"

If people have misconceptions about you, take a page out of Fifth Harmony's book and school them on who you really are.

Though it feels counterintuitive, one of the most empowering things you can do is admit your insecurities.

7. I take a step back and I breathe for once/This is what I want — "Scared of Happy"

Take a moment to figure out what you want, then go and get it.

8. No, if you keep on staring/I'mma show you what it's like to fall — "Not That Kinda Girl"

Fifth Harmony makes it known that they won't be intimidated by men who don't respect them.

9. Boy, I wanna like you/But it's better if you just don't speak — "Not That Kinda Girl"

A little well-placed and deserving sass never hurt no one — especially when you've got Missy Elliott backing you up like Fifth Harmony does on "Not That Kinda Girl."

10. I've been thinking 'bout ways that I wanna hold you close — "Dope"

Remember that thing I said earlier about accepting your sexuality?

11. I told you that I wasn't perfect, you told me the same/I think that's why we belong together and unashamed — "No Way"

On an album with a lot of lyrics about love and sex, this idea of embracing each other's imperfections and not being ashamed is ideal for an empowered and healthy relationship.

This is perhaps the most empowering lyric on the entire album and should be a mantra for everyone.

So ignore the haters and keep getting down to the best all-girl album in years that fully highlights its girl power, courtesy of Fifth Harmony. The Spice Girls must be out there feeling proud.