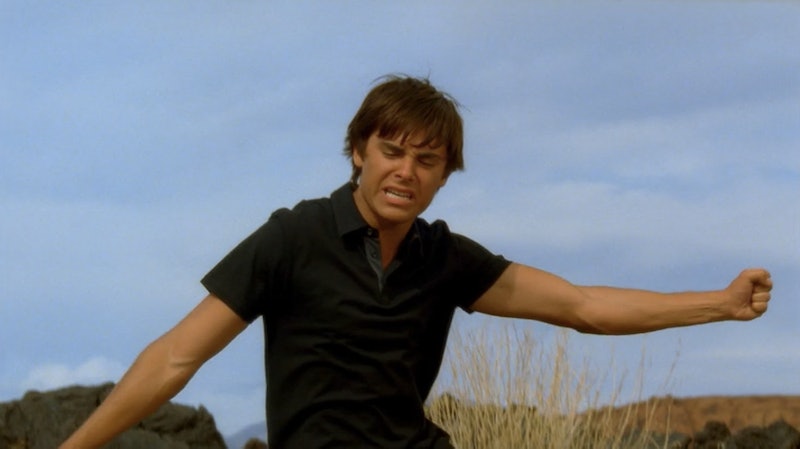 What time is it? It's summer time! Or... leering dangerously close to summer time. No matter what your favorite Disney Channel Original Movie, or DCOM, happens to be, we all have to acknowledge that it was the High School Musical franchise that really put DCOMs on the map for good or for fill. In particular, High School Musical 2 was a modern-day classic. I mean, don't get me wrong. It's great because it's basically mockable to no end, and every time you re-watch it (and, oh, I've re-watched it) find a lot of things you didn't notice in High School Musical 2 . But your ability to mock it for its strangeness doesn't stop it from being great.

And I'm not talking strange things in terms of like, "utterly ridiculous." Been there, done that, over and over again. This time around, I mean the bizarre tiny details that Disney inserted into the movie... or the bizarre tiny details Disney neglected to touch up in the final edits. I mean, while High School Musical and its sequel remain some of the most polished Disney Channel original movie installments, there are definitely some amusing things that fall through the cracks.

So, you know, prepare to be amused, and feast your eyes on these delightful little hiccups that can be found when you re-watch High School Musical 2 enough times. And then watch it again, because, seriously, it's a beautiful disaster.

Unless he's wearing a white t-shirt underneath his polo, (which itself would magically disappear mid-song), Troy somehow managed to switch up his underwear in a matter of seconds... without removing his pants... I chalk this one up to the super power of being Zac Efron.

2. The "School's Out" Sign Changes About A Bajillion Times

You can see that they tried to keep it relatively close, but, in some shots, the S clearly isn't overlapping the C.

3. Those Pictures Of Sharpay In The Background

At first I thought it was her as prom queen, which would be... weird, but now I'm thinking maybe it's her in a school play (you know, a high school musical). And that would be still weird, but probably no weirder than all the other Sharpay worship that goes on at this school.

Is this a thing kids use in their locker? A picture frame hanger? Did I miss these at my last Bed, Bath, And Beyond run?

It may just look like the lighting at this particular angle, but I feel as though I see a twinge of pink throughout this scene. Alternate theory: I'm insane.

6. Sharpay's Shoes Disappear At The Start Of "Fabulous"

It's not insane to assume she kicked them off between shots (actually it is, those things look complicated), but then they also magically reappear by the end of the song. Again, this can be chalked up to the magic of being Ashley Tisdale.

7. Yeah, This Here Is Not Vanessa Hudgens

That is 110 percent a stunt double.

8. Jason Is Somehow Doing Two Jobs At Once

He's in a server's uniform in the above shot, and then doing kitchen work in a green tee literally seconds later. That's more impressive than Zefron's quick costume changes, I have to say.

WHY IS THIS HAPPENING, EVERY TIME I SEE IT IT CONFUSES ME MORE.

This one just bugs me. Did he send it to her? Did he take it on his phone? Didn't they take pictures of each other for phone icon purposes when they first met? I don't even know.

11. This Is Not How You Dress In New Mexico During The Summer

HARDLY THE MOST EGREGIOUS THING IN THIS SCENE, I KNOW, and I'm pretty sure this is a uniform. I'm just saying that nobody would force someone to wear all black in the Albuquerque sun. That's how you get a heat stroke.

Then again, I suppose it's Sharpay, and she can spell fabulous however she wants. (Though, to be fair, I imagine she actually spells it S-H-A-R-P-A-Y.)

13. Everyone's Mad At Troy For Thinking About The Future

Like, he missed a game in order to get a scholarship so he could go to college, guys. Relax.

14. And, Finally, This Is Not A High School Musical

They literally get out of school in the very first song, and then spend the rest of the time working summer jobs. If anything, it's Summer Job Musical.

Long story short, High School Musical 2 gets even more bizarre on the second watch. Many things do. But the other thing you'll learn when you re-watch this DCOM is that there's a very good reason it's one of your favorites. It's just so much fun.