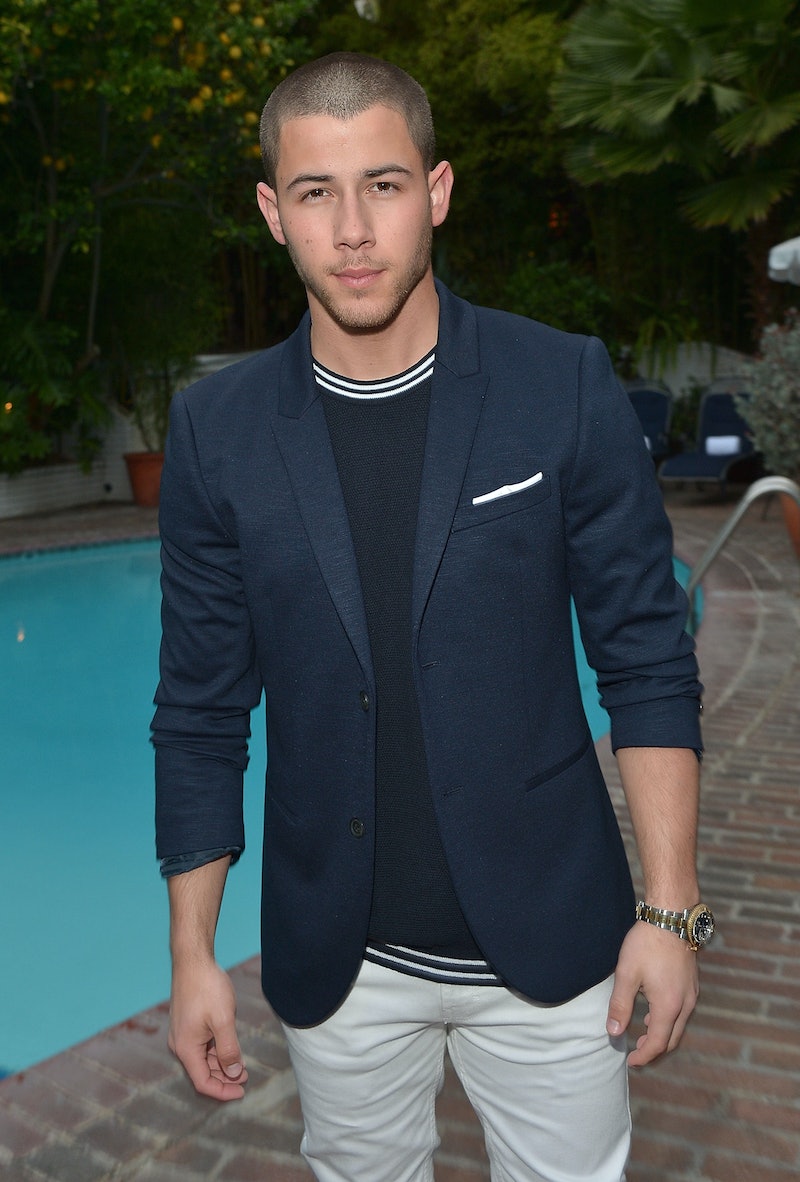 It seems like Nick Jonas is everywhere these days, and I'm honestly not hating it. With his forthcoming third album, Last Year Was Complicated, being released on June 10, it feels like Jonas fever is alive in full force. And new music isn't the only thing for fans to be excited about. With his numerous acting projects, including a summer thriller called Careful What You Wish For and his forthcoming tour with Demi Lovato, there are plenty of Jonas sightings for fans to get excited about in the coming months. Hot on the heels of his hilarious Carpool Karaoke session with Lovato in which he sort of addressed dating rumors from back in his Disney days, Jonas further elaborated on his Disney past and feelings about his peers, including Lovato, Selena Gomez, and Miley Cyrus, in a new interview with Entertainment Weekly. And he's awesomely still supportive of the entire group all these years later.

Jonas had nothing but positive things to say about Lovato and his ex-girlfriend Gomez. He told the magazine, according to E! Online:

I'm pretty biased because [Lovato]’s my friend, but I think the world is starting to see after the Grammys that Demi's probably one of the best vocalists in her lane, and Selena [Gomez] has been incredibly, incredibly smart. She played me [her album] Revival maybe six months before it came out and I knew, like, this is excellent. I was such a fan of "Good for You" and "Hands to Myself."

And it seems like Jonas is happy to embrace his Disney roots. He added,

There's a camaraderie there, a sort of unspoken brother- and sisterhood. If you want to talk about that sort of graduating class of 2008, I’m really proud — it’s a really good group. Regardless of some of the history between us in different ways, there’s a general strength and empowerment that we all feel, still being in the mix and being in a good spot. It’s a cool thing.

Of course, that "history" that he's referring to is likely the romantic past he shares with Cyrus and Gomez, which was joked about during his Carpool Karaoke session. But what's so great about this comment is the supportive nature of his feelings toward his peers. In a music industry where so many artists get press for "beefs" (whether real or media-created), it's refreshing to see a group of young people who all have different talents to bring to the table and support one another instead of causing social media wars and petty drama.

Jonas had similarly sweet things to say about his ex-girlfriend Cyrus. "I don't have a relationship with her now really, but that's not because we have any bad blood — we just sort of run in different circles," he said. He's proud of Cyrus' music career also:

It's pretty great, because I love "Wrecking Ball" so much. I still think its one of the best pop songs of the last 10 years. And you know, she's always been outspoken and authentic to who she is, so it was only a matter of time before she really owned that, and I'm proud of her... It's a lot like watching your high school crush do well, just on a bigger scale.

Jonas has praised Cyrus in the past, telling Elle magazine in 2015:

I was so young. What's unfortunate is that, as we got older, we ran in different circles. We've always had respect and wished the best for each other. I don't know that I have any regrets. It's more gratitude for having had a good friend in a time of craziness in my life and in hers.

Although this group of Disney darlings has grown up, it's pretty nice to see that Jonas has nothing but love for his peers.

They're definitely in a very cutthroat industry that loves to pit artists against each other, from perceived "diva wars" to rapper feuds, and it's nice to see that Jonas is supportive of the different career trajectories that they've all taken. There are always going to be negative stories written about similar pop stars like this bunch, but these positive vibes are exactly what's needed to squash them and to embrace the success of others. Now can we get a group "Wrecking Ball" collaboration, please?