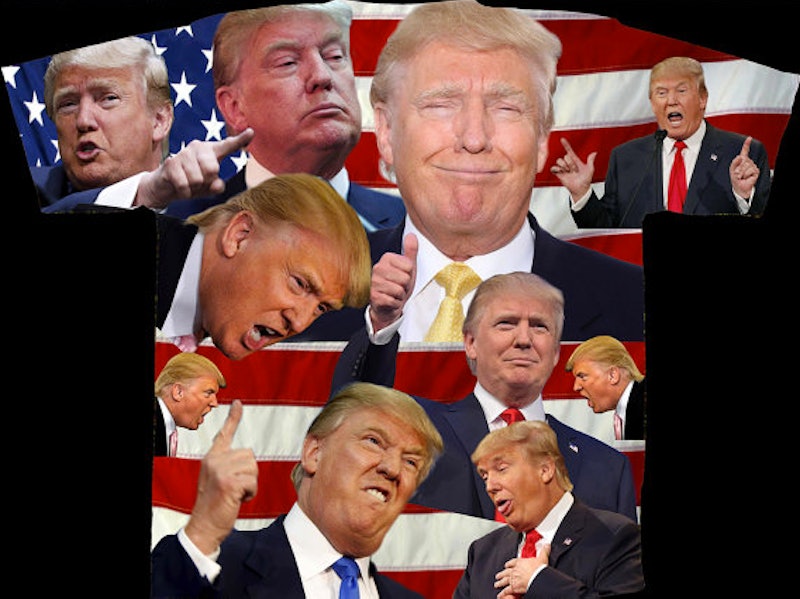 Donald Trump's political rise and the 2016 election in general have been unprecedented in more ways than I care to count. That means you're going to want to remember it, and what better way to commemorate a big historical event than by buying outlandish memorabilia? While there's plenty of normal campaign propaganda for sale for every candidate, Trump's unique candidacy and appearance have inspired items as unexpected as his success. Bizarre Trump items are just what you need to remember this crazy election when you're old and gray.

Trump's online campaign shop sells normal T-shirts, hats, and stickers with his name and Make America Great Again slogan, but it's more appropriate to buy memorabilia that matches the candidate's personality. Trump obviously isn't your average presidential candidate, so his legacy can't be encapsulated in your average campaign T-shirt. Trump is loud, assertive, and difficult to ignore — luckily there are some Trump-themed souvenirs that are as uniquely strange as the billionaire-turned-politician.

If you don't want to see Trump in the White House but still want something to remember this crazy time, buying unofficial memorabilia is perfect because it doesn't require giving money to his campaign through his online shop. Here are 10 of the weirdest Trump items that would spruce up any wardrobe, office, or home:

Human wigs are boring. Pet wigs on the other hand offer a unique opportunity to dress your dog or cat up like the reality star currently running for office.

If you strongly oppose everything Trump stands for, you can now buy a sticker of his face to place in your toilet. You'll essentially be flushing Trump every time you use the bathroom.

In terms of absurd items that serve no purpose other than to mock Trump, a pickled Trump head is the way to go. "What's more scary than Donald Trump becoming President?" the Etsy listing reads. "His pickled head staring at you."

If you want a Trump t-shirt but not a lame one that simply says "Trump 2016," you have options. This beautiful shirt showcasing the many facial expressions of the real estate mogul on top of an American flag won't go unnoticed.

A Trump prayer candle can actually be useful in lighting up your space. You can even choose what scent you want, with options ranging from birthday cake to Bora Bora.

For the ultimate insult to the politician, you can buy reusable cloth pads that essentially let you bleed on his face once a month. His facial expression in the image chosen is very fitting, showing exactly how he feels about menstruation.

A Pair Of Earrings

Earrings featuring The Donald's face are sure to draw some attention and always remind you of his displeased scowl.

A Trump puppet paper doll let's you move the billionaire around in weird positions, making him look as foolish as your heart desires.

A handcrafted wall clock that says "Donald Trump 2016, It's About Time!" is the perfect addition to any '70s-style cabin with shag carpet and wood paneling. Don't have one of those? It could also go in a normal home or office, channeling the cabin vibe on its own.

Say goodbye to run-of-the-mill souvenirs and hello to some of these amazingly weird finds.