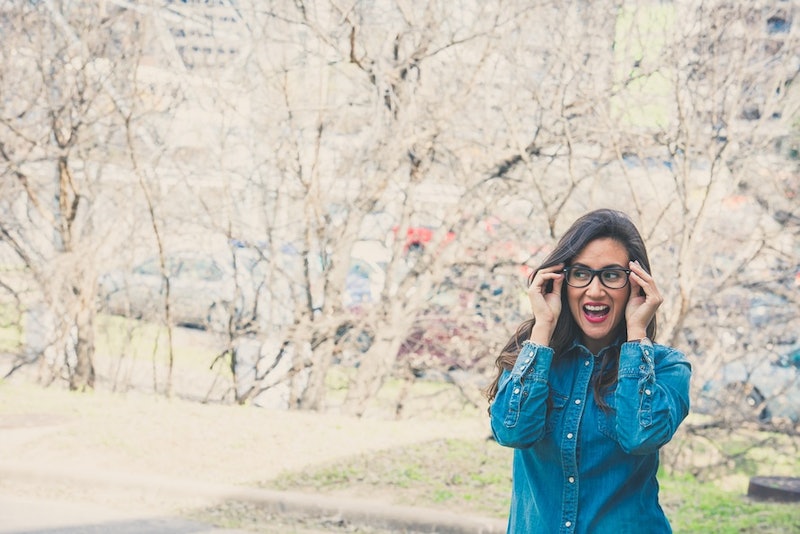 If you're an awkward person, I bet large parts of your day are spent wondering if you're being awkward without realizing it. As my fellow shy/introverted/bizarre people will know, this can actually compound the problem. And the last thing us socially inept people need is another thing to worry about. Because that's really what awkwardness is all about, at it's core — worry. Calm, cool, and collected people don't seem to be awkward. It's just us jittery, socially anxious folk who really seem to suffer from the fate that is awkwardness.

It is, admittedly, occasionally annoying to deal with, and it can make for some pretty hilarious social interactions. But awkwardness is actually weirdly charming. As Melinda Smith, M.A., and Jeanne Segal, Ph.D., said on Helpguide.org, "You don’t have to be perfect to be liked. In fact, our imperfections and quirks can be endearing. Even our weaknesses can bring us closer to others."

It doesn't matter if you're painfully afflicted, or just occasionally act shy in public — it's fine to be awkward. In fact, owning it is key. "If you can accept your awkwardness or imperfections, you’ll likely find that others will, too. They may even like you better for it," Smith and Segal said. Part of owning it will be recognizing you quirks, so here are a few ways you're being awkward without realizing. Plus, a few tips for worrying less about it all.

Check Out: Socially Accepted: A Self-Help Book for the Socially Awkward , $15, Amazon

1. You Constantly Have Your Phone

OK, let me reword that: You constantly need your phone. And that's totally understandable, as our little hunks of plastic have become the go-to coping mechanism for social situations, according to Christopher Hudspeth on ThoughtCatalog.com. And yet, whether you're awkward or not, being on your phone can sure make you seem that way. Coming in and out of the conversation, mishearing things, not appearing approachable — all good ways to come across as awkward in public.

2. You Can't Take A Compliment

Obviously a simple "thank you" would suffice, but instead you bashfully deny all the nice things someone said. Or worse, have no idea what to say at all. Often times, people dodge compliments because of self-esteem issues. As Guy Winch, Ph.D., said on Psychology Today, "Compliments can make people with low self-esteem feel uncomfortable because they contradict their own self-views." But it could also be some form of humility gone awry. Either way, deflecting a compliment usually comes off as awkward.

3. You Second Guess Yourself

The people who just "go for it" are rarely viewed as awkward. They don't stutter step, or ask for permission, or show signs of worry — they just surge forth and ask for the beer, the promotion, or whatever else it is they want. Awkward people, on the other hand, don't trust their own gut and crumble under shyness. If this sounds like you, start believing you deserve good things. Once you act like you have a right to be here (which you do), you'll come off a little less bizarre.

4. You're Afraid To Ask For Help

People who don't ask for help often think they're doing everyone a favor, but they're actually coming off as awkward. There's nothing chill about silently struggling, or pretending to know what you're doing when you don't. So don't be afraid to ask for a favor. In fact, people prefer it. "There's a psychological phenomenon called the Ben Franklin effect, in which asking for a favor from someone automatically makes them warmer to you, and more likely to do you another favor," said Jayson Demers on Inc. Pretty cool, right?

You're not here on this planet with the sole purpose of keeping every conversation going. But letting them sag sure isn't great either. "Everybody has conversations that don’t flow, have awkward silences, or end abruptly. But for socially awkward people, this is the rule, not the exception. Their conversations are habitually like a rough wagon ride on a bumpy country road," noted communication coach Eduard Ezeanu on his blog PeopleSkillsDecoded.com. If that sounds familiar, then you may be acting unintentionally awkward.

6. You Let People Tread On You

There is such a thing as being too nice, and when you are, it can cross over into awkward territory. Think about holding the door open while everyone passes through, or saving a stranger's spot in line for way too long. These things aren't your job, and yet you assume the position because you are nice (and, OK, a little awkward). By all means, be your usual sweet self, but don't let people take advantage.

7. You Have Bad Timing With Jokes

Ah yes, the poorly timed joke. Is there anything more awkward than that? They fail due to timing, and also due to a poorly read crowd. "Oftentimes attempts at wittiness around the wrong people come off as uncalled for or inappropriate," noted Hudspeth. So make sure you're among similarly-humored people before speaking up, or just keep it to yourself.

8. You Don't Know Whether To Hug Or Handshake

This is the classic scenario between awkward people. Do we hug? Do we shake hands? Do we accidentally whiff a high five? The options are truly endless, and all of them are painfully awkward. For all of these reasons, they're usually better off avoided. "If you can’t firmly decide to either go in for the fist bumps, high fives, embraces, etc. — don’t bother," Hudspeth said. It really can be as easy as that.

9. You Focus On Other People's Opinions

Getting caught up in your head is a pretty good way to be awkward, and there's no better way to do so than by ruminating on other people's opinions. You may find yourself thinking about what your friend said, or what your boss meant by that comment. And before long, you're completely checked out of the present moment. The thing to keep in mind here is that most people aren't judging you. It may feel like they are due to the spotlight effect. But remembering that no one really cares (and I mean that in a good way), can help you avoid hanging out in awkward land.

You may feel like keeping steady eye contact is the polite thing to do, but it's not. Oh no, it is not. That's because too much eye contact can seem intimidating, while too little makes you appear shy. What you want is a happy medium. A good trick is to look at the other person just long enough to notice their eye color, before looking away, according to Lily Zhang said on TheMuse.com. With a little practice, it'll start to feel more natural. I promise.

11. You Aren't OK With Silence

Think back to the last time you stood in a friend circle at a bar or party. There were probably some cool, measured types, who let the conversation flow naturally. And then there was you, unnaturally urging the convo forward, and laughing and making jokes during silences. (This is so me, by the way.) Attempting to fill silences never really works, and it's also not necessary. "There truly are some instances where silence is golden — especially if it’s somebody else who’s responsible for the awkward quietness," Hudspeth said. Duly noted.

Remember, there's nothing wrong with being awkward. The world needs all types, and you and your abounding awkwardness simply add to the uniqueness of it all. But if you've been wondering, or hoping to change your ways, then keep some of these tips in mind to help you ease up on that awkwardness.