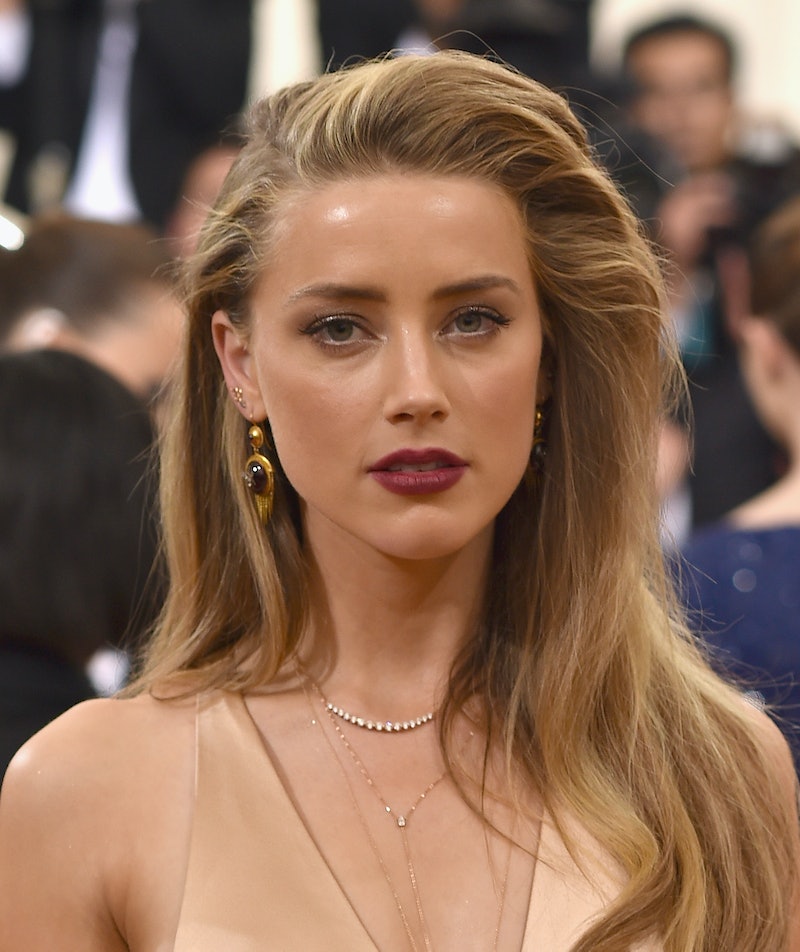 The news surrounding Johnny Depp and Amber Heard's divorce took a truly shocking turn on Friday when both TMZ and People reported that Heard filed a domestic violence restraining order against Depp, submitting a photo of her bruised face as evidence. (Depp has not publicly responded to the allegations of domestic abuse.) Up until this point, Heard, who was requesting spousal support from Depp and filed for divorce three days after Depp's mother died, was called a cold-hearted gold digger, by some who thought she was thirsty to cash in on the lack of a prenup. The domestic violence claims, of course, have now turned everything on its head making Depp's alleged behavior the focus. And while some longtime Depp fans may be eager to sweep such accusations under the rug, it's important not to dismiss Heard's claims of abuse just because Depp is such a beloved actor. In fact, that's the most selfish thing you could do in this situation.

(Bustle has reached out to reps for Heard and Depp for comment on the alleged abuse, but has not yet heard back. His rep previously released a statement to People about the divorce, which reads: "Given the brevity of this marriage and the most recent and tragic loss of his mother, Johnny will not respond to any of the salacious false stories, gossip, misinformation and lies about his personal life. Hopefully the dissolution of this short marriage will be resolved quickly.")

For longtime fans of the box office superstar — who have loved him in everything from A Nightmare On Elm Street to Pirates of the Caribbean to Alice In Wonderland — the idea that his soon-to-be ex-wife is accusing him of domestic assault seems impossible. After all, this is a man revered in Hollywood, beloved by his peers, his fans, and studio willing to spend millions on his movies. Therefore, it can be really, almost impossibly, difficult to reconcile these emotions — and in an effort to make things less complicated and not shatter the picture of Depp we've had in our heads for decades, it's easy to turn a blind eye to Heard's claims. But that would be a mistake.

While the validity of the claims has not yet been determined in a court of law (and Depp has not yet commented on Heard's request for a restraining order), it is crucial that we don't dismiss them outright. Doing so only stifles the alleged victim's voice, making it seem even more difficult for victims of domestic violence to come forward. It's fair to say that Heard is already fighting an uphill battle — a man like Depp has the fame and money to be incredibly powerful — the least the public could do is give her, and Depp for that matter, an even playing field. Whether or not what Heard claims is true, we, as the public, must keep an open mind and not discount her claims because they do not fit into the Depp narrative that we've been used to for so long.

We've witnessed victims' claims be largely ignored in the face of the accused's prestigious career, star power, and otherwise "spotless" image. The names Bill Cosby and Woody Allen certainly spring to mind (Cosby and Allen have both adamantly denied the claims of sexual abuse against them), and while their accusers' voices have received more equal attention in the last year, that wasn't always the case. It is doing a disservice to victims everywhere to have such serious claims swept under the rug or for fans to assume that the accused's image overrules any claims against him. It may be hard, as a fan, to hear Depp's estranged wife out, but this, frankly, is not about you. Instead, we owe Heard our ears and a fair shot to speak her piece, even if (and maybe because) what she has to say so harshly contrasts with the view of Depp that the public has held for all these years.