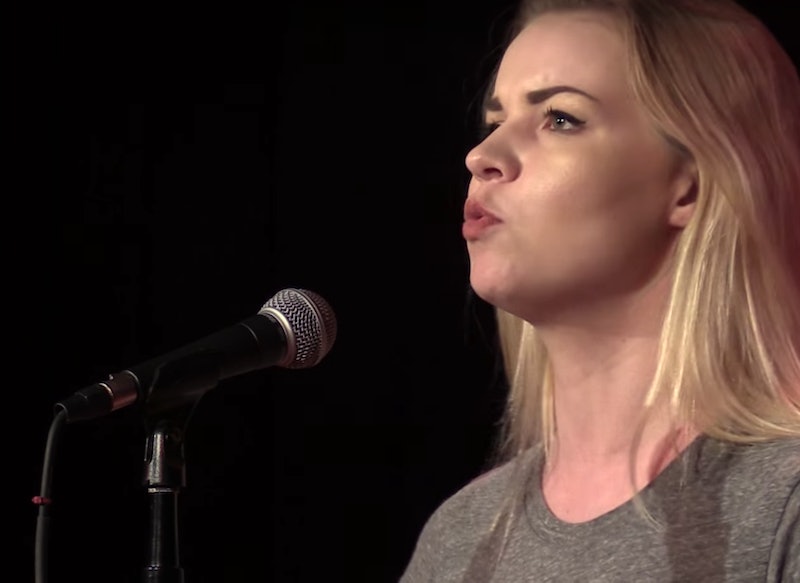 There's an invasion happening on women's bodies. We might not always call it harassment, but it is offensive and sometimes threatening regardless — and it's what Reagan Myers tackles in her slam poem "The Girl Becomes Gasoline": a woman's right to space. In the powerful piece, Myers recounts her own personal experiences when someone did something unwelcome to invade her space, driving home an important point about how our culture perceives women's bodies in the process. When others feel they have the right to make physical contact with us in whatever manner they see fit — which happens all too frequently — it becomes clear that our bodies are viewed as public property, as if we are simply objects filling up space, as if our bodies are not ours to own or control.

There were times, Myers says, when she was followed through airports. There was the time a classmate put his arm around her, with no invitation and while ignoring her noticeable shrinking away. And she is far from the only woman to have experienced these sorts of invasions. As the years pass on, and people repeatedly demonstrate that they think your body is theirs to do with as they please, a certain fire starts to burn in you: My body is not yours to touch.

All the while, you try to remain polite, pleasant. Well, you wouldn't want to come across as rude, would you? So you smile and try to reclaim what's yours without offending anyone, even though they just offended you.

Check out Myer's full performance below:

It's difficult not to be moved by Myers' heartfelt words; and it's something to which many of us can unfortunately relate. I'll never forget the time I was out with friends, having a great night, for example; I was talking to a guy I hardly knew when he reached up to brush hair out of my face and tuck it behind my ear. I cringed. But he smiled, looked at my lips, and kept talking, ignoring my discomfort, ignoring the fact that he had touched my without my permission.

Like many women, this wasn't the only time a man has touched me, uninvited. But when I politely but firmly object, I'm told I'm uptight. A prude. I need to relax. In some cases, I'm even a b*tch for it.

It's strange when you think about it, because I know for a fact that some women make a point of remaining inconspicuous. Have you ever been sitting on the subway and felt the need to take up as little space as possible? Or maybe there was a time you felt you were in the way. Many of us try to make ourselves come across as unobtrusive as possible, both literally and figuratively speaking — although we were never obtrusive to begin with. Simply existing is not being obtrusive, and we are allowed to occupy space without worrying that we are not permitted to be there — or worrying that someone else will consider the space we are occupying, and our bodies within them, to be theirs. As Myers puts it, "I don’t know when I became a space to be filled, my thigh an open lease."

Even stranger is the reaction when the roles are reversed. A man is flirting. A woman is desperate and clingy.

Myers' poem is not a man-hating speech, or a pity party for women. It's an observation based on the real-life experiences of many. The situation is no less serious or important when it's a woman touching a man without permission, and I'm sure that happens, too. When did a human's body become someone else's to use as they see fit? Myers' words shine light on an important issue: We all have the right to take up space. And we all have the right to do so without someone trying to take it away.

More like this
Sandra Bullock, Girlboss Extraordinaire
By Matt Harkins & Viviana Olen
What The History Of Pride Month Means For Celebrations Today
By Jay Polish
25 Quotes About Love To Share During Pride Month 2022
By Madeleine Aggeler and Emma Garza
Meet The Spice Company Founder Who Sees Chai As A Metaphor
By Madhuri Sathish-Van Atta
Get Even More From Bustle — Sign Up For The Newsletter