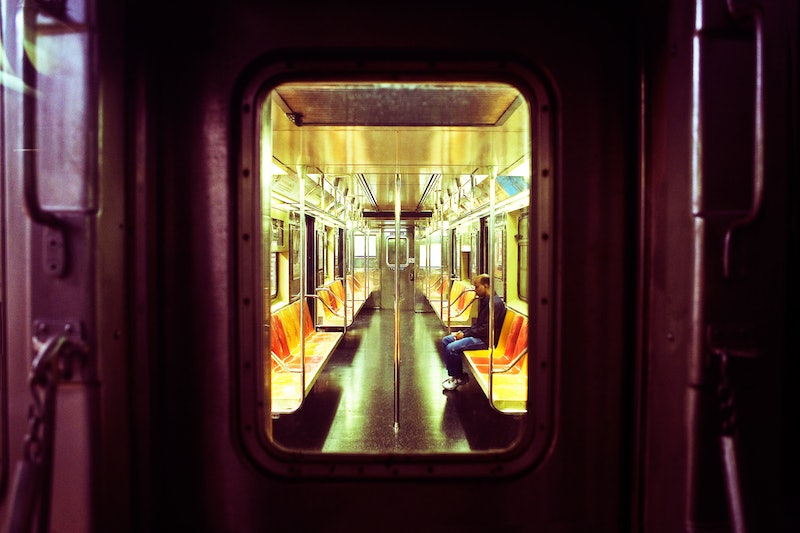 "Manspreading" has been making waves all over the news and social media lately, but the newest news about it... is actually that it isn't new at all. In fact, manspreading has been happening for nearly a century, and some recently-dug-up cartoons and articles dating back as far as 1918 prove it. If you're not yet familiar with the term, it's a man's act of sitting with his legs very wide apart, typically on the subway or other forms of public transportation; Urban Dictionary explains that it's to make room for their privates, although whether that claim is valid has been hotly contested. It's not uncommon to see manspreaders on public transportation taking up multiple seats, leaving other passengers SOL.

Some people are in a fuss over this because it's considered very rude, understandably. Public transportation isn't typically comfortable to begin with. We should all suck it up and scooch over to let more people sit down — men and women alike. Other people are angry about this because they're saying it's yet another example of the patriarchy at work — a literal representation of male entitlement crowding out everyone else, other people's needs be damned. Look at 'em, sitting all exposed, taking up more space than they need.

Regardless, while manspreading is sweeping the Interwebs as of late, we're now learning that it's been going on for a lot longer than we think — as evidenced by a cartoon dating back to 1918:

This cartoon appeared in Chicago-based transportation pamphlet The Elevated News nearly 100 years ago, proving that it's been an issue for a lot longer than we all thought. According to CityLab, who recently traced the history of subway etiquette campaigns, the pamphlet also reads, "Men will give their sons to the service of their country, they will give to the Red Cross and buy Liberty Bonds until they feel it pinch, but will they disturb themselves and sit a little closer to give a seat to some poor tired girl? They sit there complacently, occupying twice the space they really require, while some other passenger is deprived of a seat through their selfishness." Well, that took manspreading to a whole new place.

The Elevated News isn't the only material asking people to take up less space historically, either. Cartoons and ads urging commuters to be polite passengers also popped up in the 1940s and 1950s, with one reading, "Please don't be a feet rester, space hog, door blocker, litterbug, leg pest." This issue of space also spread through London and even made an appearance in Tokyo in the mid 1970s.

Despite the longstanding existence of manspreading, we've certainly escalated it in recent days, going so far as to arrest men for the nightmarish crime of sitting with their legs too far apart.

Regardless of your stance on the issue of manspreading, we can't deny that for many years, we've been asking people to be a little more polite to their fellow passengers. So next time you're on the subway or city bus, make room for the people around you!

More like this
Iran Has Issued A Death Sentence Over Mahsa Amini Protests
By Catharina Cheung, Darshita Goyal and Maxine Harrison
What To Know About Martin Bashir After Watching 'The Crown'
By Bustle UK
10 Thanksgiving Alternatives You Can Celebrate This Month
By Katie Mitchell
Footballer Jake Daniels Shared His Thoughts On A World Cup Boycott
By Sam Ramsden
Get Even More From Bustle — Sign Up For The Newsletter