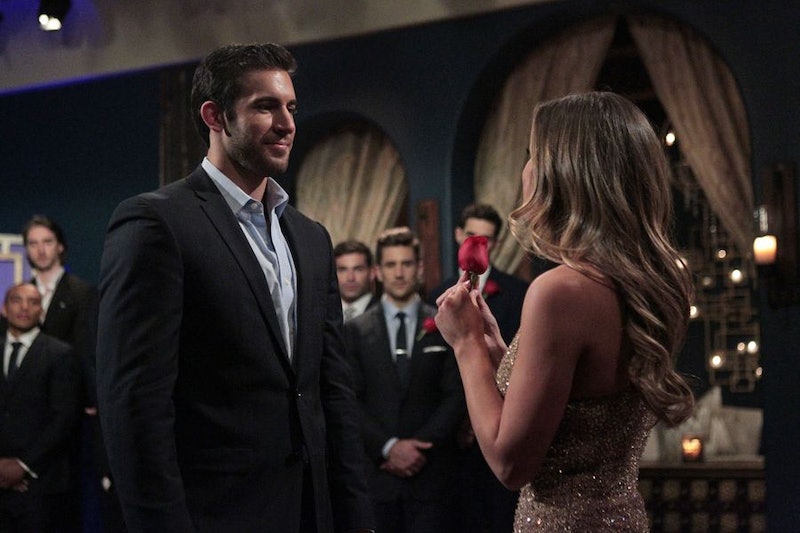 Fans of The Office favorite had to do a double-take during the Season 12 premiere of The Bachelorette, because Bachelorette contestant Derek and Jim Halpert look exactly the same. If not the same, then at the very least alarmingly similar. The fact that JoJo was still able to function upon seeing him may indicate that she may not be a huge fan of the popular NBC sitcom, as many fans of the show would've been swept off their feet at the sight of a slightly hunkier Jim Halpert. Derek may be the man that every Office fan wants in their life, but is that enough to get him to the end of the season and win JoJo Fletcher's heart?Yes, yes it is. Or, at least, it should be. In the first episode of Season 12, Derek showed up and not only looked like Jim Halpert, he basically was Jim Halpert. Right after stepping out of the limo he claimed he was "excited nervous" and throughout the evening proceeded to charm JoJo with some light fumbling which could've caused flashbacks for anyone who dedicated years of their life to waiting for Jim and Pam to happen. Derek may not win based on his similarity to Jim alone, but he should and here's why.

Derek isn't funny in the way a lot of people on The Bachelorette are "funny." What Derek lacks in Santa outfits or small pieces of toast, he makes up for in being genuinely affable and a little awkward as seen in his first-night conversation with JoJo. Derek revealed that he considers himself a nerd, to which JoJo's response was, "You're like, super smart?" Derek's quick, awkward "uhh..." after that question feels like it could've been written for Jim on any kind of date scenario in The Office. Derek may not have jokes or props, but he was extremely genuine.

The very first thing that JoJo said about Derek after he left the limo was that he's "sweet," which is very similar to his Office counterpart. One can easily imagine Derek showering JojJ with gifts, going on trips to Niagara Falls, and making eyes at each other after pranking that weird guy that sits next to Derek at work.

"I just hope I didn't self-destruct." While that could have easily been a line from The Office, it's actually what Derek said after his one-on-one time with JoJo. Derek also said, "[I] thought I was gonna be less nervous. But I think, inevitably like — y'know." Poor Derek was feeling awful shy around Jojo, which basically describes the first hundred episodes of The Office. It worked out for Jim and Pam, though, so just because Derek is a little shy doesn't mean ha and JoJo aren't a perfect match.

Sure, maybe fans who watched The Office are a little biased in Derek's favor. It's nice to live in a world where even someone like a simple paper salesman like Jim can go on the amazing adventure that is love and find a whole world of excitement that exists within Scranton, Pennsylvania. But Derek isn't Jim. Derek is a commercial banker with a fear of fluffy kittens who just happens to resemble a beloved television character. However, if Derek wants to solidify his popularity outside of the house, throwing some judgemental glances directly into the camera can't hurt.