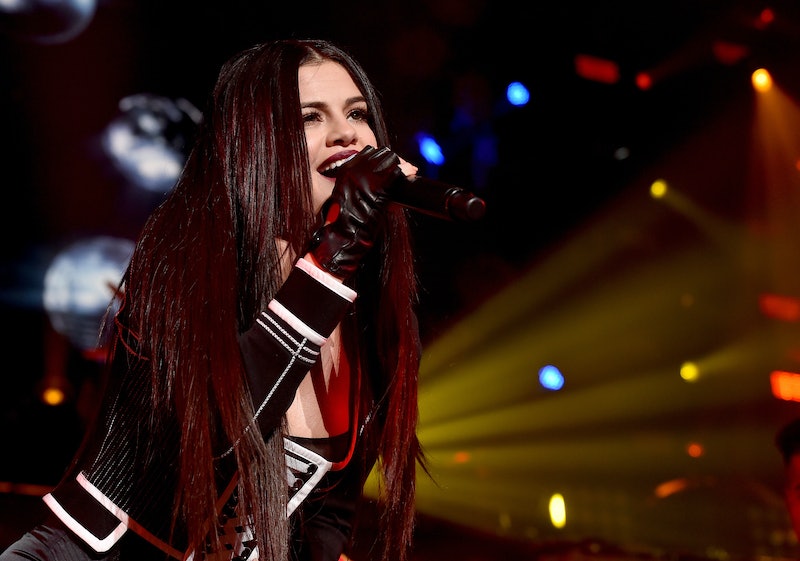 Despite being the most followed person on Instagram in the entire world and meeting thousands of fans after every show on her Revival tour, Selena Gomez still managed to be blown away by fans during her Montreal tour stop on Thursday night. In a sweet moment caught on camera (these are the things I live for), Gomez broke down in tears upon seeing fans holding up empowering signs during her performance of her 2011 hit "Who Says." It was a moment so powerful that Gomez had to cease singing, instead looking around at the stadium in complete awe and blinking back tears. She even uttered a certain four-letter expletive at the end because of how overwhelmed she was. It's truly amazing.

The fan-organized project included "hundreds [of] 'we are worth it' signs that fans held up," according to a description of the fan-filmed YouTube video. (The chorus of the song contains the lyrics, "Who says / Who says you're not perfect / Who says you're not worth it.") And it undoubtedly had an even more powerful reaction that the fans could've even dreamed of, moving their idol to tears as she visibly choked up over the hundreds of fan-made signs.

It's a moment that goes to show you how much of an impact the artist can have on fans (in this case, Selenators feeling confident about themselves thanks to one of her songs), but perhaps more importantly, the impact that fans can have on their favorite artists. In an industry where it can be so easy for the celebrity to feel cynical and jaded, to get so used to the millions of fawning admirers that everyone blends in as one smiling face after another, it's moments like these that remind fans (and their idols) just how important they can be.

Artists are nothing without the support from their die-hard followers, and this video is a heartwarming reminder of the impact and power that a fan base can have on their idol. Check it out above.