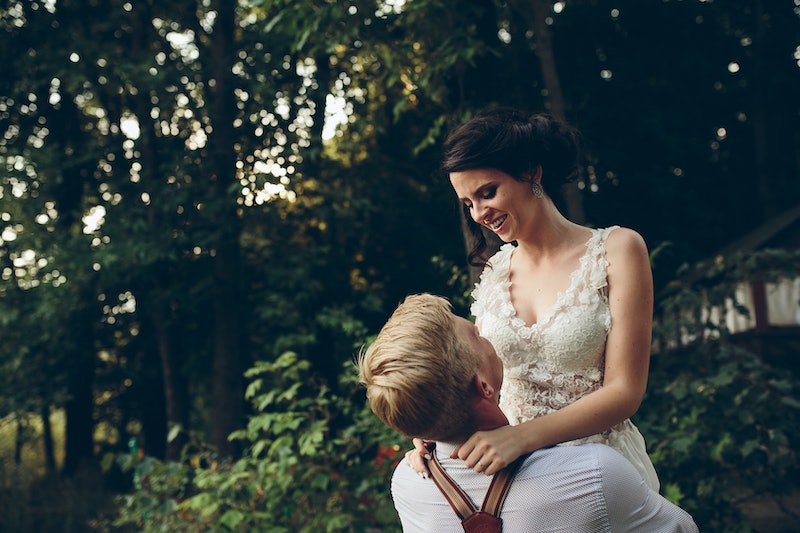 We've all seen rom-coms: we've watched characters have meet-cutes, fall in love at warp speed, and tie the knot in a quaint but quirky ceremony just before the credits roll. While it's unhealthy to expect a picture-perfect relationship with your partner, it's just as dangerous to believe a lot of the negative stereotypes floating around about married life. Despite our adult brains telling us we know better, it can be hard to shake off some of the misconceptions about marriage that we've been taught.

Almost as often as we see happily ever after in movies, we see the disgruntled married couple whose relationship is teeming with problems. This perpetuates the bizarre trope that all newlyweds are blissfully happy, while anyone over 40 and married is unhappy or dissatisfied in their relationship. The truth is that there are no constants, and no set rules for what a marriage should look like. Getting married isn't a band-aid, a one-time fix for larger relationship issues, nor is it guaranteed to be full of tension and misery just because you're "tied down." Though technically more of a "commitment" than dating, marriage is ultimately still about you and your partner, and how the two of you deal with problems as a team.

Yes, marriage will undoubtedly be filled with trying moments for you and your partner, but at the end of the day, it's up to the two of you to communicate and problem-solve. Every relationship and marriage is unique, and we shouldn't be so quick to believe the stereotypes about married life (both the good and the bad). I spoke to Denise Limongello, a psychotherapist and relationship expert in NYC, to find out what common misconceptions about married life need to be put to bed — for good.

When you tie the knot, it may seem like a promise that from here on out, you're always 50 percent of a duo, and that you'll never have to feel lonely again. But this ignores the fact that even when married, you can experience the feeling of growing distant from your partner, which can feel even lonelier than technically being on your own. "Many divorced individuals report feeling extremely lonely within their marriages and listed "loneliness" as a reason for deciding to split up," Limongello says. When you and your spouse don't work as a team, the isolation you experience may feel even more extreme by comparison.

2. Marriage Will Bring You Closer

At the end of the day, a certificate declaring you married does nothing to actually improve the quality of your relationship. "With life's unpredictability, it is likely life will throw you some challenges and curveballs," Limongello says. "Couples who experience trauma and loss during the course of their marriages often report feeling disconnected from their partners as a result. While many couples might hope the commitment will ensure closeness, many studies show that couples report feeling more distant from each other after tying the knot."

3. Your Sex Life Will Diminish (Or Disappear)

"Dead bedrooms" are, unfortunately, very real for a lot of couples. Couples can face lulls — months or even years — where their sex life is a fraction of what it used to be. Fluctuating libidos and ups and downs in the frequency of sex are perfectly normal in any relationship — married or not. But it's important to recognize that it's not always going to happen. Those middle-aged married couples on TV who bemoan the fact that they never have sex? Yeah, luckily it's not like that for everyone who's walked down the aisle, and science has even debunked that myth. And, it may even get better as you age. A 2015 study of 1,656 married American adults ages 57 to 85 found that married sex gets better in the golden years.

4. Marriage Will Be Boring

"Studies show that happily married couples often report feeling more excited and satisfied once married than when single or just dating their partners," Limongello says. "Many married couples attribute these feelings of excitement to a combined income that means more options and choices when building a life together." Nevertheless, it's still important to be self-aware and occasionally spice things up to make sure your relationship doesn't fall flat, but it's a misconception that marriage will inevitably lead to boredom.

5. Your Spouse Will Be Able To Read Your Mind

The bond between married partners is, in most cases, super strong, and ideally your partner will know you better than anyone else. However, this does not mean your spouse becomes clairvoyant on your wedding day, and can automatically tell what's going on in your mind anytime there's an issue. The reason healthy marriages survive? A knack for communication and a willingness to compromise. Don't assume that just because you're married, your partner will be able to magically understand your every whim. If you want something, ask. If there's a problem, communicate it respectfully and calmly.

6. Your Money Troubles Will Get Easier

Marriage — and all the adult milestones that come with it — is damn expensive. Weddings and honeymoons and houses and diapers don't buy themselves, and having a dual income isn't an automatic guarantee that your financial life will be smooth sailing. Sure, two incomes are better than one, but keep in mind that not all married couples combine bank accounts. Like I said before, marriage isn't a band-aid that can solve your problems, and this goes for money troubles, too. Unless you decide otherwise, marriage doesn't automatically mean you're entitled to all of your partner's cash, and debt can still accumulate. However you decide to handle your financial situation, remember that you're a team.

7. Children Will Fix Your Marriage

As much fun as it is to pick out tiny baby clothes and coo over a little toddler's antics, children are not a quick-fix for a strained marriage. "Many of us believe that children will complete our lives and improve satisfaction within a marriage," Limongello says. "Recent research of divorced couples, however, shows that many divorced individuals reported that having children is what ended up ruining the marriage. Bringing children into an already unsatisfactory partnership can be an unwise decision and possibly lead to more strain on the relationship than joyousness."