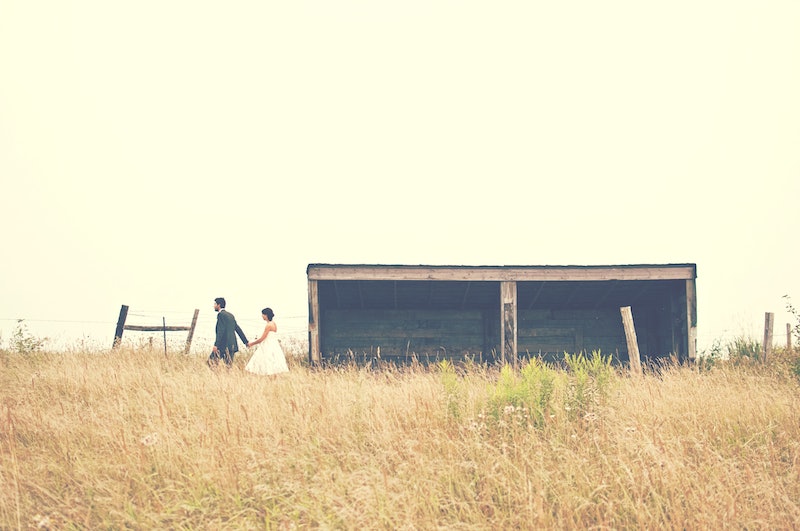 From non-traditional ceremonies to non-traditional partnerships, millennials are radically redefining marriage. As the facts about marriage change, the myths about marriage change, too. Whether it's same-sex marriage, polyamorous marriage, long-distance marriage, or something totally unique and of a couple's own design, the age old rite of passage now offers more possibilities than ever.

Although there are plenty of people for whom marriage means a white dress, monogamy, shared finances, and 2.5 kids, it definitely does not have to be that way for everyone. Free thinking folks have challenged romantic tradition for decades, but couples in their twenties and thirties today are now more likely to do so — and not be ostracized for it. Whether this marital transformation is occurring because it's trendy to buck tradition or because it's more socially acceptable to explore your options, it's heartening to see marriage changing with the times.

As a person in a non-traditional marriage, I still catch myself making assumptions about other married people, somehow forgetting that, no, marriage is not what it was when my grandparents (or parents!) were tying the knot. Here are six things I consciously tell myself not to assume about married people, because we can all use a reminder what marriage does (and doesn't have to) mean.

1. That They Are Monogamous

There are high profile married couples redefining commitment, and there are plenty of regular couples doing it, too. Contrary to popular perceptions, monogamy is not the only way you can express your devotion to someone.

Marriage doesn't have mean that you need to ask your partner whether or not you can buy that thousand dollar leather jacket. Some couples keep their finances separate, and they're just as "together" as those who share a bank account.

3. That They Are Straight/Gay

The gender and/or sexual orientation of the person you're married to does not forever define your own sexuality. In particular, queer sexuality isn't erased because you're in a heterosexual relationship at the moment.

4. That They Want Kids

5. That They Live Together

Some couples live together in a tiny studio apartment, some have separate bedrooms in the same house, some live with each other part time, some live separately, and the list of living configurations goes on!

6. That They Plan On Being Together Forever

To some, marriage is "'til death do you part," and to others, it's until you don't think it's working and you respectfully move on to the next chapter of your life. See also: conscious uncoupling.

More like this
The 3 Zodiac Signs Most Likely To Get Married Later In Life
By Kristine Fellizar
These Artists Are Reimagining Black History Month To Create A Better Future
By Katie Mitchell
25 Inspiring Quotes From Black Women To Celebrate Black History Month
By Kyli Rodriguez-Cayro and JR Thorpe
19 Instagram Captions For Celebrating Black History Month
By Ayana Lage
Get Even More From Bustle — Sign Up For The Newsletter
From hair trends to relationship advice, our daily newsletter has everything you need to sound like a person who’s on TikTok, even if you aren’t.